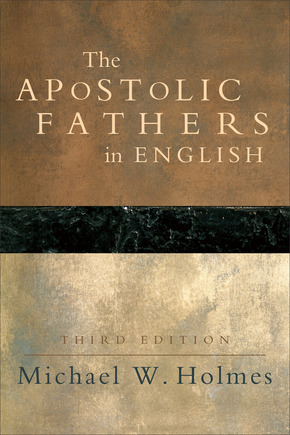 "Holmes's new translation will become the standard reference source for both students and scholars who work on the apostolic fathers in the twenty-first century."--Hennie Stander, Review of Biblical Literature Michael W. Holmes, a leading text critic and scholar of the Apostolic Fathers, offers a highly readable translation of the most significant body of proto-orthodox early Christian writings after the New Testament. This authoritative and contemporary translation is in the tradition of the magisterial J. B. Lightfoot and J. R. Harmer version but is thoroughly up to date.

The third edition features numerous changes, including carefully revised translations and a new, more user-friendly design. The introduction, notes, and bibliographies have been freshly revised as well.

"This third edition of a well-known classic features improved layout, revised introductions, improved translations, and expanded bibliographies. In short, it is a splendid teaching tool for university or masters programs in which the Greek text cannot be used. Students will find these intriguing texts accessible and comprehensible."--Carolyn Osiek, professor of New Testament, Brite Divinity School

"This newly revised, third edition of translations of the Apostolic Fathers by Michael Holmes offers a marked improvement over previous versions of the widely used Lightfoot/Harmer English-only tradition. In his own masterful style Holmes has reintegrated useful introductions and current bibliographies into the collection, tweaking the translations and advancing the overall feel of the volume. This work will undoubtedly make a worthy contribution to the personal libraries of students and scholars alike in patristic studies. I recommend it highly!"--Clayton N. Jefford, professor of Scripture, Saint Meinrad School of Theology

"After the New Testament itself, churchmen like Clement, Ignatius, and Polycarp provide the very earliest writings of Christianity, and so their testimony is of enormous importance. More than church fathers, they are Apostolic Fathers, immediately adjacent to the events that gave rise to our faith. Small wonder, then, that Michael W. Holmes has focused his scholarship on this group, bringing out a third edition with all its enhancements in translation and commentary. Extremely readable and helpfully divided by headers, these texts are a gold mine of evidence on earliest Christian theology, worship, and history, including information on what happened to Peter and Paul at the end of their lives. As such, this material is next to the Bible in importance."--Paul L. Maier, professor of ancient history, Western Michigan University, and author of In the Fullness of Time

Praise for the second edition:

"Baker and Michael Holmes are to be congratulated on this new edition of Lightfoot's Apostolic Fathers. It is a worthy successor to Lightfoot, with new introductions that bring the discussions up to date and enough revision of the translation to make it readable for a large audience. One hopes such a readable and useful one-volume edition will create new interest in this very important aspect of early Christian history."--Gordon D. Fee, professor emeritus of New Testament studies, Regent College

"J. B. Lightfoot was probably the greatest English-language analyst and exegete of earliest Christian texts. His work on the apostolic fathers was among his most important contributions to Christian scholarship. Michael Holmes has put a new generation of students in his debt by editing and revising Lightfoot's English translations, their value enhanced by new introductions, bibliographies, and notes."--James D. G. Dunn, Emeritus Lightfoot Professor of Divinity, University of Durham

"When Michael Holmes first revised the Lightfoot-Harmer (1891) English translations of the Apostolic Fathers, he updated its English and made other changes that almost a century of scholarship demanded, but he took care to note those points at which his new edition differed significantly from that of his predecessors. The resulting translation, published in 1989, was widely recognised as an excellent introduction to the Apostolic Fathers. . . . In this third English-only edition, Holmes makes more substantial changes than he did in 1989. The most significant change is in the translation, which Holmes now renders in contemporary and inclusive English. . . . This is his own work, not merely an updating of Lightfoot and Harmer. Footnotes included in the translation include more cross-references to Scripture than did those in previous editions. . . . There are also changes in format and in Holmes's editorial content. Running heads and subheadings make it easier for readers to navigate their way through the translations, and judiciously constructed bibliographies . . . have been updated. . . . Two clear maps and an index of ancient sources are also included. Holmes's bibliographies, his incisive and authoritative introductory essays and his fluent, accurate translation make this an extremely useful way into the study of the Apostolic Fathers."--Andrew Gregory, Journal of Early Christian Studies

"[This] third edition contains a wholesale revision of the English text, bringing the usage up to date in contemporary English. Further, Holmes, who is a respected expert in biblical scholarship and early Christianity, is especially sensitive to translation issues respecting gender. . . . The result is a very accessible and readable text of these ancient writers that manages to be contemporary without being idiosyncratic or colloquial. . . . It seems clear that this edition has been produced specifically for the purpose of accessibility for the student and general reader, both lay and clerical. . . . This of course is not to say that this book will not be of use to the scholar; but it is rather to point out just how useful this book will be in undergraduate, seminary, and Christian education contexts. . . . Holmes gives us an excellent resource for entry into study of that first generation of thinkers who began that great tradition that we have come to know as Christian theology. This volume should be gratefully received as a superb point of departure in coming to know their voices."--Travis E. Ables, Reviews in Religion and Theology

"In this latest edition, the [English] translation is again thoroughly revised. The design and typography of the volume is also improved and made more 'user-friendly.'. . . The number of cross-references to Scripture has been increased, and notes indicating points of textual variation have been simplified. The introductions to each of the writings in the corpus have been revised, and the bibliographies have also been updated. . . . There is a very good general introduction to the apostolic fathers. I am sure the section on the historical setting of the apostolic fathers will be especially helpful for the English reader of the translations. . . . The translation of the Greek text is sound. The notes do help the English reader who has no knowledge of the Greek to gain insight into the Greek text. . . . Holmes's new translation will become the standard reference source for both students and scholars who work on the apostolic fathers in the twenty-first century."--Hennie Stander, Review of Biblical Literature

"A 'fresh and comprehensive revision.' Numerous stylistic and typographical changes make the texts far easier to read. A general introduction introduces the reader to the main questions surrounding the literature as a whole, while each writing in turn is provided with its own specialized preliminary remarks. Students will appreciate the many insights into early Christianity that are provided by these introductions. . . . The style is formal without being pedantic; idiomatic without being excessively free. Amid the many one-volume editions of the Apostolic Fathers available today, this handy, readable version of the texts deserves to be considered by students and merely curious readers alike."--Casimir Bernas, Religious Studies Review

"A fresh and comprehensive revision of J. B. Lightfoot and J. R. Harmer's original translation. . . . This third edition not only represents a thorough revision of the translation but also displays several changes aimed at making the volume more accessible to general readers and beginning students, such as prominent chapter and verse numbers, section subheadings, and convenient footnotes which provide explanatory details or references to other primary and secondary literature. . . . This will be a helpful book for those needing a very gentle introduction to these texts; clearly a very general readership is envisaged. By making available this third edition Holmes has provided an accessible and useful volume that will no doubt serve to introduce many interested readers to these important texts form Christianity's early history."--Shawn W. J. Keough, Toronto Journal of Theology

"The essential component of a work like this is the translation of the texts themselves. Certainly from the perspective of the English-speaking reader, Holmes has carried out this task masterfully. The translations read fluidly and accessibly as English text. Moreover, the quality and style of the original authors shine through the translations remarkably well. . . . The introductions are well-written and useful for general orientation to the texts. Moreover, Holmes sketches for the reader the current state of scholarly debate surrounding each text. . . . The refreshed layout and presentation in the third edition is a substantial help to the reader. Clearly displayed chapter and verse numbers make quick reference to the texts an easy task. The insertion of subheadings into the translation provides helpful orientation and guidance to the reader. . . . The footnotes are clear and unobtrusive. . . . The maps detailing the spread of early Christianity and the route of Ignatius are helpful for setting these documents in their geographical context. The third edition of The Apostolic Fathers in English will be an excellent resource for students entering patristic studies or for scholars in related disciplines who do not need access to the original texts."--Jon Stovell, Journal of Greco-Roman Christianity and Judaism