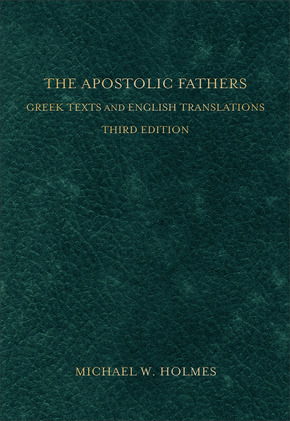 "The presentation is magnificent, the attention to detail first class, and the actual contents repay close study. This book is an essential addition to the libraries of all interested in the history of early Christianity, and even if one owns an earlier edition it is now time to update one's library with this highly significant volume."--Paul Foster, Expository Times

Following the recent publication of his revised translations in The Apostolic Fathers in English, 3rd ed., Michael Holmes, a leading expert on these texts, offers a thoroughly revised and redesigned bilingual edition, featuring Greek (or Latin) and English on facing pages. Introductions and bibliographies are generous and up to date. In the textual apparatus, existing notes have been revised and expanded, and well over two hundred new notes have been added. This handsome and handy one-volume, thin-paper edition, with a reader-friendly page layout, will be an essential resource for New Testament students and scholars.

"A beautiful piece of bookmaking, so nice that the many on this blog who already own an earlier edition will want to get a copy of this one. . . . The book is a small, green hardback, and approximately the same size as the small NA27. The paper has good opacity yet is so thin that the 800 pages are only slightly thicker than the NA27's 800 pages. The paper is also whiter than the creamy NA27. Most pleasant of all for reading is the font and generous leading (white space between lines). One's impression while reading is that this is delightfully 'clean' and 'clear.'. . . The textual apparatus in general has been 'significantly expanded.' At the same time, references in the text to the apparatus have been simplified so as not to distract from smooth reading."--Randall Buth, evangelicaltextualcriticism.blogspot.com

"The introductions to each text incorporate the best insights of recent scholarship, the original language texts themselves have been revised in light of fresh manuscript discoveries, the translations have been entirely recast, and the bibliographies are full and up to date. Thus, this third edition should be viewed as Holmes' own new work and it promises to be of great use to readers for generations to come. . . . The publisher, Baker Academic, is to be applauded for producing a pocket-sized hardback edition of this book that naturally stays open on the desired page. In an age where quality of book production is too often diminishing, it is refreshing to see the amount of thought that has gone into producing a book that is in a format that makes its use by readers easy and pleasurable. . . . The clarity of typeface adopted for this edition also facilitates the reading of both the original texts and the translations. Turning from the physical features of this notable volume to its actual contents, one will notice that the same exceptionally high standard is maintained. . . . Without doubt the new edition of Michael Holmes' Apostolic Fathers is a landmark volume. It is unusual to make such a statement about a revised publication. However, the truth is that this is no mere light revision--rather it is the product of meticulous, insightful scholarship which, although carefully built upon the foundation laid by Lightfoot and Harmer, nonetheless is a scholarly edifice that has been skillfully constructed by Holmes himself. The presentation is magnificent, the attention to detail first class, and the actual contents repay close study. This book is an essential addition to the libraries of all interested in the history of early Christianity, and even if one owns an earlier edition it is now time to update one's library with this highly significant volume."--Paul Foster, Expository Times

"The Apostolic Fathers offers Christian scholars, teachers, and pastors a significant addition to their libraries. Holmes significantly improves on his own second edition in a number of important ways. . . . This third edition makes an effort to reach scholars without abandoning its popular appeal. Scholars will be pleased by the improved critical apparatus. . . . The introductions and bibliographies are appropriately updated to reflect the most recent important contributions. . . . Popular readers and new students of the apostolic fathers will discover several features in this handy volume that render Holmes's edition ideal for general use. . . . The revised design and typography of the third edition are perhaps the most obvious improvements. The new running page headers contain chapter and verse numbers, which assist in navigation. Also descriptive subheadings within the translation help summarize the content of sections. . . . A genuinely welcome contribution to evangelicalism's growing library of relevant Christian classics. This third edition of The Apostolic Fathers is sure to become the preferred edition for personal and classroom use by English-speaking academics and pastors as well as interested students of the early church."--Michael J. Svigel, Bibliotheca Sacra

"[A] handsome hardback volume, printed on high quality paper. . . These texts offer valuable windows onto the development of Christianity in the late first and early second century, and ought to be widely read. This volume offers an excellent way in. . . . In Holmes's second edition . . . he updated Lightfoot and Harmer's English and made other changes that almost a century of new scholarship demanded, but tended to follow the interpretative decisions of his predecessors. Here, in this third edition, the changes are much more extensive. There is a new English translation, modelled loosely on that of the NRSV, some changes to the Greek text, a reworked critical apparatus, and expanded introductions to each text together with useful and very up-to-date bibliographies. Two clear maps, an index of ancient sources, and a subject index to the Introduction and Notes are also included. This is clearly Holmes's edition, even if its origins go back to Lightfoot. Holmes's judicious bibliographies, his incisive and authoritative introductory essays, his fluent English translation and his careful weighing of the textual evidence for the original texts included (mainly Greek, with occasional Latin or other languages) make this an extremely useful volume."--Andrew Gregory, Anvil

"This critical edition of The Apostolic Fathers serves not only as a valuable and useful primary source tool for one's library, but also offers readers an opportunity to become familiar with the earliest post-biblical Christian documents. . . . [Holmes] provides a thoroughly revised English translation (based on the 3rd edition of Holmes's The Apostolic Fathers in English), an expanded and revised critical apparatus, and a few revisions to the Greek texts. Improvements also include modifications in format, design, and typography to enhance presentation and ease of use. . . . Holmes has expanded the introductions with updated information on textual witnesses and problems, and he has extended the bibliographies. The size is compact, the Greek and English fonts are very readable, and the English translations include subheadings indicating section content. . . . This is an excellent resource that serves as a window into the early development of Christianity. It should appeal to a wide variety of readers: those doing patristic or New Testament research, those wanting to improve their ability to read Koiné Greek, and those who simply desire to read for themselves these important writings."--Christopher W. Cowan, Southern Baptist Journal of Theology

"I have to . . . give top billing to Michael Holmes' new handy Greek-English edition of the apostolic fathers. Simply a must."--Scot McKnight, blog.beliefnet.com/jesuscreed

"This third edition . . . has shed almost all vestiges of Lightfoot-Harmer and stands on its own as an independent critical edition of the Greek texts and English translations of the Apostolic Fathers. . . . There are some advantages to the new edition by Holmes over those of his predecessors. . . . [It] is conveniently bound as a single volume. . . . [It] is both hardcover and of a more convenient size. . . . Physically the book is well-produced. . . . Holmes has . . . met the need for a reliable, single-volume critical edition of the Greek texts of the Apostolic Fathers with English translations. His revision commends itself in many ways as the standard hand edition of this corpus."--Timothy B. Sailors, Bryn Mawr Classical Review

"[The book] includes textual and interpretive notes, good introductions to the individual documents, up-to-date bibliographies . . . and a subject index. Book lovers will delight in the handy format, the fine printing on Bible paper, and the handsome binding. A standard resource for early-Christian studies."--International Review of Biblical Studies

"I'm intrigued at what appear to be signs of a (re)discovery of extra-canonical Christian texts of the first two/three centuries, particularly among Protestant-Evangelical circles. . . . The third edition [of The Apostolic Fathers] . . . further signals a striking interest in these texts. . . . The publisher . . . invited Holmes to prepare a more thorough-going revision of the Lightfoot textual notes and decisions and the English translation as well. But it is also very interesting to note the new format chosen. Instead of the previous, somewhat larger-page format of previous editions, this third edition happens to be almost exactly the size of the standard Nestle-Aland edition of the Greek NT, with similar paper. . . . As a physical artifact, this third edition seems to format The Apostolic Fathers as deutero-canonical texts! We wouldn't be so surprised to find a Roman Catholic publishing house doing this, but it's very interesting semiotically that we have this project from a publishing house long associated with a conservative Evangelical constituency. I take this as a particularly physical signal that today's Christians, even Protestant Evangelicals who prize the Bible above all, are re-discovering texts such as those included in The Apostolic Fathers. Perhaps there is a growing recognition that these and other texts of the second and third centuries are invaluable remnants of the earliest expansion and consolidation of the Christian movement in the 'post-apostolic' period, and are also very fruitful case-studies for modern Christians seeking to work out life in a 'post-Christendom' world."--Larry Hurtado, larryhurtado.wordpress.com

"The second century CE [is] a crucial period insufficiently taken account of in scholarship, at least in comparison with the massive attention given to the NT and even to later patristic times/figures/texts. . . . One of the interesting publishing developments in recent years was the commitment of Baker Academic Press to the fine hand-edition of the Apostolic Fathers edited by Michael Holmes (developed from the earlier edition by J. B. Lightfoot and J. R. Harmer). The 3rd edition (2007) is now the best available hand-edition of these important texts: 1 Clement, 2 Clement, Letters of Ignatius of Antioch, Letter of Polycarp to the Philippians, Martyrdom of Polycarp, Didache, Epistle of Barnabas, Shepherd of Hermas, Epistle to Digonetus, Fragments of Papias."--Larry Hurtado, larryhurtado.wordpress.com