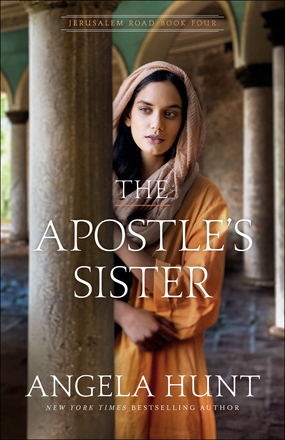 She's always longed for more, but what if the path she's chosen requires more than she's willing to give?

Aya, daughter of Zebulun of Tarsus, does not want a traditional life. After years of being overshadowed by her brilliant brother Sha'ul, she wants a chance to use her own gifts beyond being a wife and mother. When her father insists that she marry a Torah student, she reluctantly agrees.

A dedicated scholar, Sha'ul, or Paul, returns to Tarsus to follow the instructions of the Law and wed the woman his father has chosen to raise his profile and help him earn a seat on the Great Sanhedrin--the highest religious court in the land. But when the Nazarene, Yeshua, and his followers bring trouble to the Holy City, Sha'ul will stop at nothing to silence them.

After moving to Jerusalem with her husband, Aya expects to be bored in her role as wife to a Torah student. Instead, she finds herself fascinated by his studies. Then her brother makes a life-altering decision, and she must face a troubling question: Can she remain true to her beliefs and still love her blasphemous brother?

"Hunt's story comes alive with wonderfully researched details involving festivals, choirs, and religious cornerstones of ancient Jewish life. . .The plot is driven by its characters and the slow build of God's work within their lives, culminating in a moving finale."