Inside the Evangelical Movement That Failed a Generation 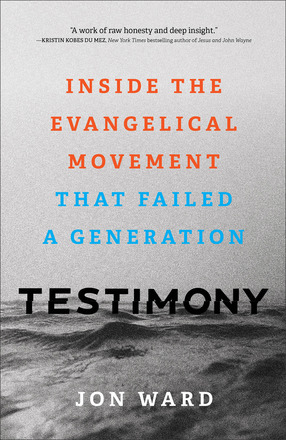 "Ward is consistently clear-sighted and perceptive as he charts a genuinely fascinating personal and spiritual evolution."--Publishers Weekly

Jon Ward's life is divided in half: two decades inside the evangelical Christian bubble and two decades outside of it.

In Testimony, Ward tells the engaging story of his upbringing in, and eventual break from, an influential evangelical church in the 1980s and 1990s. Ward sheds light on the evangelical movement's troubling political and cultural dimensions, tracing the ways in which the Jesus People movement was seduced by materialism and other factors to become politically captive rather than prophetic.

A respected journalist, Ward asks uncomfortable but necessary questions, calling those inside and outside conservative Christian circles to embrace truth, complexity, and nuance. Ultimately, he longs for a return to the way, the truth, and the life of Christ.

Ward's experience and reflections will resonate with many readers who grew up in the evangelical movement as well as all those who have an interest in the health of the church and its impact on American life.

"With raw honesty, deep insight, and a self-deprecating sense of humor, Jon Ward offers an insider's view into the White evangelical world in which he was raised. Rubbing elbows with prominent figures and seemingly destined to take up the mantle of leadership, he instead chose to walk away from it all. Through his eyes we see the inner logic of that world, what draws people in and what drives people away. Testimony will be illuminating for those who have walked this path and for those struggling to understand the world of conservative evangelicalism from the outside."

"In Testimony, Jon Ward dissects the cultural world of evangelical Christianity from an insider's perspective while employing his skills as a journalist to question its ethos and impact. He narrates an experience that will feel deeply familiar to many evangelicals and then goes on to illuminate the contours and context of the movement as many within it embraced Trumpism. Testimony demonstrates the power of truth--no matter who it comes from or where it leads. This book will make you ponder, discuss, and testify about your own journey and beliefs."

Jemar Tisby, New York Times bestselling author of The Color of Compromise and How to Fight Racism; professor of history, Simmons College of Kentucky

"An illuminating work that shines light into the fissures of spiritual abuses in the church and that documents Jon Ward's journey as a Christian to move forward and find a better way. This honest exposé allows healing in us, and his journalistic insights bring a generative path toward the new."

Makoto Fujimura, artist and author of Art and Faith: A Theology of Making

"Jon's meticulous reporting has always brought nuance and life to his writing about politics; his thoughtfulness about faith is the secret weapon he's now sharing with the world. He appreciates the complexity of belief and the deep human desire to connect to something larger than ourselves. Even as he recounts his disillusionment with conservative Christianity, Jon remains a witness: someone who seeks and documents the truth, even when that means turning his sights on himself. This book is honest, vulnerable, scrupulous, and surprising; a must-read for anyone seeking to navigate the fault lines of our polarized moment."

"Testimony will be for this generation and moment what Don Miller's Blue Like Jazz was for that moment. This is a work that will connect."

Michael Wear, author of Reclaiming Hope: Lessons Learned in the Obama White House about the Future of Faith in America

"Jon Ward's Testimony: Inside the Evangelical Movement That Failed a Generation is the book I have been waiting for. I suspect there are millions more like me who will resonate with Jon's powerful witness. And while the book holds important and meaningful content, it also functions in an atypical way; it is an antidote to loneliness and heartbreak. To read it is to participate in a circle of trust where you are not alone, you're not going crazy, and all is not well. This is a form of setting things right--a move toward healing. Any words on a page that can achieve this good goal are worthy of our attention and gratitude. I'm listening and grateful."

"Ward's personal story--of faith and family and things left behind--is also the story of how our culture came unglued. Testimony is a deeply moving book, and deeply important."

Matt Bai, author of All the Truth Is Out: The Week Politics Went Tabloid

"Jon Ward's honest, meditative, and beautifully written memoir shines a bright light on the often-obscured links between religion and politics in America."

Yuval Levin, author of A Time to Build

"[An] enlightening memoir. . . . . Ward is consistently clear-sighted and perceptive as he charts a genuinely fascinating personal and spiritual evolution. This will resonate especially with Christians wondering about faith's place in modern American society."