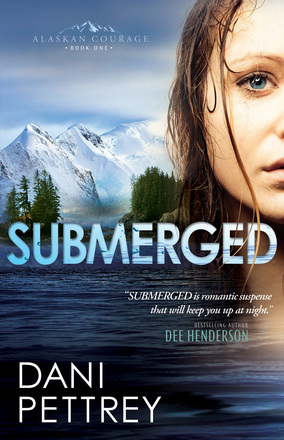 Bailey Craig vowed never to set foot in Yancey, Alaska, again. She has a past, and a reputation--and Yancey's a town that doesn't forget. She's returned only to bury a loved one killed in the plane crash, but then dark evidence emerges and Bailey's own expertise becomes invaluable for the case.

Cole McKenna can face dangerous rescue dives. He can face the fear a murderer may be threatening his town. But facing the reality of Bailey's reappearance is a tougher challenge. She broke his heart...but doesn't seem to be the same girl who left Yancey ten years ago. And he’s not the same guy she left behind.

Racing against the clock and a rising body count, Bailey and Cole must move beyond the hurts of their pasts to work together until the truth of what is hidden in the depths finally surfaces.

Submerged is romantic suspense that will keep you up at night!

An amazing story of faith, suspense, the power of forgiveness and second chances! Dani Pettrey has a gift for developing characters to fall in love with...

Lynette Eason, bestselling author of THE WOMEN OF JUSTICE series

[A] steadily paced thriller. . .Pettrey's debut novel is a thoughtful attempt to capture both love and suspense in this intricately plotted mystery.

Combining romance, danger, and a dose of Russian history, the novel proves a rapid and entertaining read.

Pettrey is a new author to watch. Recommended for fans of Dee Henderson.

The story was easy to read, the suspense was excellent, and the plot was intricate. The suspense part of this novel was good, as was the overall message of grace and forgiveness.

A spell binding mystery, full of suspense and a great story that will pull you in.

Brimming with romance, suspense, faith, and forgiveness, Submerged is a superbly written debut novel from Dani Pettrey that will satisfy readers of nearly any genre.

Submerged is filled with action and mystery, engaging the reader from the first scene. . . . Pettrey sustains a high level of suspense throughout the narrative.