by: Susan May Warren 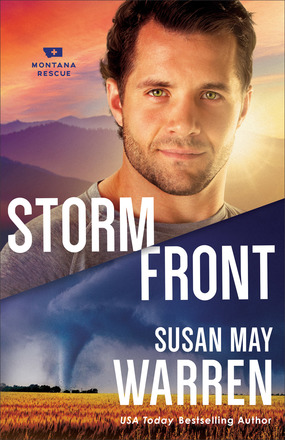 Life and love hang in the balance during a deadly summer of storms.

A tornado has destroyed a small Minnesota community, and among the missing are not only a group of students but also PEAK Rescue team leader Chet King. Ty Remington will stop at nothing to rescue his mentor, not even when the girl he loved--and lost--walks back into his life. But Brette needs his help more than he knows, despite her stubborn determination to push him away. And when he gets a second chance, loving her just might cost him more than he can imagine.

A blogger for Vortex Storm Chasers, Brette Arnold didn't expect her adventures to land her in the same place as Ty, the guy who she walked--no, ran--from over a year ago. She had her reasons--good ones. The kind that tell her that falling for him again would only lead to heartache. But Ty isn't the kind of man to give up--not on the missing students or on her.


Praise for the Montana Rescue series


Susan May Warren is the USA Today, ECPA, and CBA bestselling author of over sixty novels with more than one million books sold. Winner of a RITA Award and multiple Christy and Carol Awards, as well as the HOLT and numerous Readers' Choice Awards, Susan can be found online at www.susanmaywarren.com, on Facebook at Susan May Warren Fiction, and on Twitter @susanmaywarren.

Praise for A Matter of Trust

"Warren captures both the beauty and danger of the life of a competitive snowboarder, transporting readers through vividly detailed descriptions to a treacherous world of snow-covered mountains and daring displays."--Booklist

"Warren excels at creating flawed characters the reader cares about, as well as building a suspenseful adventure. She draws vivid word pictures in her stories, with a faith element that is present but not preachy. Readers will be engaged from the first page until the last."--Christian Library Journal

Praise for Rescue Me

"Multilayered, complex characters with real-life flaws and faith struggles provide a large amount of depth and food for thought throughout the book."--RT Book Reviews

"A fast-moving, high-stakes romantic adventure set against the backdrop of Glacier National Park, which will leave longtime fans and new readers alike anticipating the next book in the series."--Publishers Weekly

"With action, adventure, romance, and a large, nuanced cast, Rescue Me is classic Susan May Warren. Pitting characters against nature--and themselves--in a rugged mountain setting, Warren pulls readers in on page one and never lets go."--Irene Hannon, bestselling author and three-time RITA-Award winner

"Rescue Me is the second book in the Montana Rescue series, and Susan May Warren has once again created characters that dig into your heart and latch on. Characters so real I missed them after the end."--Patricia Bradley, author of Justice Betrayed