Spiritual Warfare for the End Times

How to Defeat the Enemy 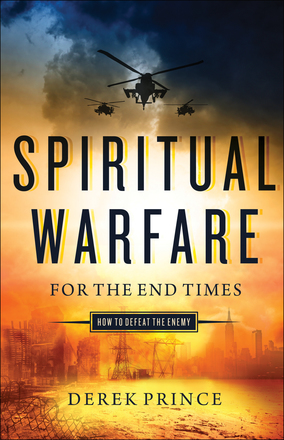 How to Overcome the Evil of These Dark Days

As the time approaches for Jesus' return, the spiritual battle between good and evil is heating up. Evidence is all around: corruption, shootings, genocide, civil wars, false prophets, increased persecution. The enemy is on the move.

Yet God is on the move, too, in powerful ways--and we can join Him in His work. The Bible says that we overcome evil with good. With piercing insight and practical application, Derek Prince will help you understand not only the intensified warfare environment in which we live, but also how you can help unleash God's goodness in the world. You'll learn how to re-equip and wield the weapons God has given you and how to walk in your authority in Jesus Christ.

For "we do not wrestle against flesh and blood, but against principalities, against powers, against the rulers of the darkness of this age, against spiritual hosts of wickedness in the heavenly places." It's time to stand up and fight, to bring hope and light to these turbulent days and join Jesus in the triumph of good over evil.

Derek Prince (1915-2003) is the author of more than 50 books and 600 audio and 100 video teachings, many of which have been translated and published in more than 100 languages. He founded Derek Prince Ministries International, and his daily radio broadcast, Derek Prince Legacy Radio, still reaches listeners around the world. His concise way of explaining the Bible has helped millions build a foundation of faith.