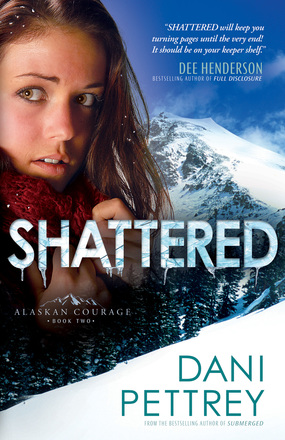 When her prodigal brother Reef's return to Yancey, Alaska, is shattered by his arrest for murder, Piper McKenna is determined to protect him.

Deputy Landon Grainger loves the McKennas like family, but he's also sworn to find the truth. And he knows those closest to you have the power to deceive you the most. With his sheriff pushing for a quick conviction, some unexpected leads complicate the investigation, and pursuing the truth puts Landon's career in jeopardy.

When Piper launches her own investigation, Landon realizes he must protect her from herself--and whatever complications await as the two follow clues deep into Canada's rugged backcountry. Not only does their long friendship seem to be turning into something more, but this dangerous case is becoming deadlier with each step.

"Dani Pettrey is a name to look for in romantic suspense, and Shattered will keep you turning pages until the very end. It should be on your keeper shelf."

"Murder, romance, and faith compete in the Alaskan wilds for victory in Shattered. Dani Pettrey rocks it once again with indomitable characters, fierce courage, and cutthroat danger! Sit down, buckle-up, and hang on for an avalanche of a story!"

"Shattered is a masterful story that blends suspense and distinct characters into a what-if tale that keeps the reader turning pages and begging for more."

"Enough twists and turns to keep even the most astute suspense lover guessing. Shattered is an entertaining read that's sure to please Dani Pettrey's many fans."

Irene Hannon, bestselling author of the GUARDIANS OF JUSTICE series

"With the drama of an Alaskan winter as her setting, Pettrey once again blends suspense, romance, and mystery into a fast-paced story that will keep readers on their toes."

"Pettrey builds a world that captures the reader with vivid and compelling descriptions... I strongly recommend this novel to romantic suspense fans. While Shattered can stand alone, you won't want to miss Submerged, the first book in the series."

"Shattered is a fast-paced suspense and the romance thread is a sizzling undercurrent throughout every chapter.... Fans of Dee Henderson's O'Malley Family series will love Pettrey's McKenna clan."

"Pettrey is an excellent author painting vivid word pictures which allow her readers to feel as if they are there, part of the story... This is one series that will keep you on the edge-of-your-seat, peeking around corners, looking for the next exciting scene."

"Dani Pettrey delivers an intrigue-filled adventure, the experience of a deep friendship before falling in love and the selfless heroism of ordinary people."

"Dani Pettrey is a wonderful new addition to the Christian fiction and suspense genres. Her debut novel, Submerged, was a smashing success, and Shattered is even better...The character development keeps readers hooked and eagerly awaiting the next novel in the series."