A Thoughtful Approach to God’s Design for Marriage 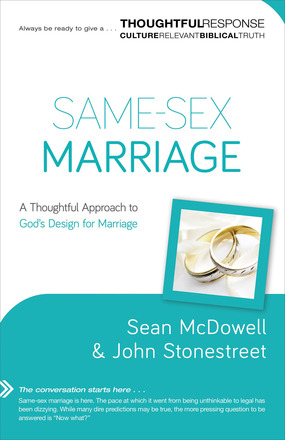 Same-sex marriage is here, presenting unique challenges and opportunities. How do those who follow Christ faithfully answer the standard talking points for same-sex marriage? And how can they best articulate the case for one-man, one-woman marriage in everyday conversation?

Sean McDowell and John Stonestreet believe a thoughtful approach to God's design for marriage is the answer to both questions. The key is not a contentious attitude towards those who believe in same-sex marriage, but a winsome perspective that is faithful to Christ, committed to truth, and shaped by a love for God and others. Christians need to know that because Christ has risen, there is no such thing as "all hope is lost." They are still called to engage culture even if they are viewed as wrong, illegal and intolerant.