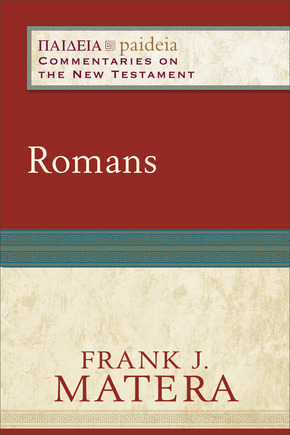 "[Matera] provides readers with a careful scholarly overview of the text and discusses the major interpretive issues that it has occasioned. This is a highly informative and user-friendly commentary on a hugely influential text."--Paul Foster, Expository Times In this volume, respected New Testament scholar Frank Matera examines cultural context and theological meaning in Romans. This commentary, like each in the eighteen-volume Paideia series, approaches each text in its final, canonical form, proceeding by sense units rather than word-by-word or verse-by-verse. Each sense unit is explored in three sections: (1) introductory matters, (2) tracing the train of thought, (3) key hermeneutical and theological questions. Graduate and seminary students, professors, and pastors will benefit from this readable commentary, as will theological libraries.

"Frank Matera's commentary focusing on God's saving righteousness revealed in the gospel is a lucid exposition of Romans. It introduces the major interpretive options for key issues, provides careful exegesis in conversation with other interpreters, and both highlights and engages the letter's profound theological claims. It is therefore a great gift not only to students but also to seasoned interpreters of Paul."

"Matera wisely distills and dispenses the massive scholarship on Romans. Students will find here an excellently organized, clear, and substantial description and discussion of this important and complex letter. Matera's personal passion for Paul's magnificent convictions in Romans energizes this fine introductory commentary."

"Matera has produced a remarkable commentary that is simultaneously nuanced and accessible. He is in clear conversation with the best biblical scholarship, but there is not a pedantic word in his lucid writing; rather, this commentary is unusually engaging. Attending to the literary, historical, and theological dimensions of Romans, Matera judiciously guides his readers in a careful study of the biblical text. All who are interested in Romans will be grateful to Matera for this fine work. I recommend it with enthusiasm!"

"This excellent commentary on Paul's letter to the Romans is the latest addition to the Paideia series, which is geared for graduate students of the New Testament and strives to present solid biblical scholarship in commentaries that inform their readers about the meaning of the text."

"Treating Paul's Epistle to the Romans theological[ly] is hardly an innovation. . . . The challenge is to compress that voluminous discussion into a single volume in a way that still gives the reader a sense of the letter's overall message, while saying something new and coherent. On the whole Matera achieves these objectives. . . . In relatively small compass he provides readers with a careful scholarly overview of the text and discusses the major interpretive issues that it has occasioned. This is a highly informative and user-friendly commentary on a hugely influential text."

"Matera's work certainly merits attention. This series as a whole aims at M.A.-level students, seminarians, and upper-level undergraduate students interested in biblical and theological studies, and Matera provides a marvelous volume for students just beginning to seriously engage the book of Romans. . . . Matera writes with a gracious balance that resists the parochial tribalism that tends to infect much biblical scholarship. . . . What stands out above all in this commentary, however, is its clarity. In a scholarly universe in which abstruse syntax and difficult-to-trace reasoning are often mistaken for erudition, Frank Matera refuses to play such games. He marvelously attains Calvin's supreme literary goal of 'lucid brevity.' Bible students young and old are in his debt. . . . For students just beginning to build their libraries and their understanding of Paul's most magnificent letter, . . . [this work] will prove clarifying and rewarding."

"The sheer glut of new commentaries on the market can make one's eyes glaze over at the thought of yet another. But a work by veteran NT scholar Frank J. Matera on an important text like Romans should make even the most jaded scholar or pastor take notice. . . . The book is sprinkled with numerous sidebars; contains an 11-page introductory bibliography; and has indices of subjects, modern authors, and Scripture and ancient sources. These features make it highly user-friendly for its intended readers. Matera highlights key points of disagreement, presents options succinctly and clearly, and treats positions with which he disagrees charitably--all important features for an introductory commentary. . . . This is an even-handed, readable commentary, well-suited to its target audience. I am already recommending it to students."

"An admirable addition to the Paideia series. . . . The author is an experienced teacher and respected scholar, well equipped by virtue of his previous publications on Paul and NT theology to take on the challenging task with which any interpreter of Romans is confronted. In guiding readers through this dense and complicated letter, Matera proves himself a masterful pedagogue: his exposition of the text is careful, comprehensive, systematic, and lucid. He has a gift for offering understandable explanations of complex matters without resorting to oversimplification. His original translation is felicitous, consistently well crafted, and informed by a good knowledge of textual evidence, the most significant of which he discusses to good effect. He is always fair in representing the varied positions that scholars propose concerning disputed issues, and he is unfailingly modest in stating his own conclusions. . . . On a writing as consequential as Romans, there is probably always need for another commentary--if it is a good one. And this commentary is not only good; it is excellent."

"Professors looking for a textbook on Romans need look no further than this excellent contribution by Frank Matera. . . . The balance between exegesis and theology, the clarity of exposition, the concise references to a wide body of scholarly literature, the judicious treatment of disputed questions, the frequent summaries, and the useful figures and charts make this medium-sized commentary a student's ideal point of entry into the world of scholarship on Romans. The book fittingly attests to the author's long and distinguished career and fully reflects the instructional aims of the Paideia series. . . . In his discussion of 'Theological Issues,' Matera generally selects one or two topics that pertain in a special way to the chapter/section under consideration. His selection and brief explanations are excellent, helping students see the wide-ranging theological influence of Romans and introducing them to the contributions of key interpreters throughout history. . . . Matera's commentary is a solid reading of Romans and an excellent introduction to the exegetical and theological study of Paul's greatest letter."--Pablo T. Gadenz, Review of Biblical Literature

"Matera's Romans commentary is meant for 'students at the master's level' and, despite fulfilling this purpose well, it gives some food for thought to more advanced scholars alike. . . . Matera follows the agenda of the Paideia series carefully throughout the text of the epistle, avoiding jargon that beginners might find confusing. The Greek is transliterated, thus removing linguistic obstacles from anyone unfamiliar with it or in the process of learning it. Unlike most commentaries, the book also includes 15 illustrations that may help visual learners remember the theological content of the epistle by linking it with e.g. archaeology or church art. . . . It is without hesitation that I recommend Frank J. Matera's Romans commentary as a carefully written and good value point-of-departure to students venturing into the field of Romans."--Samuli Siikavirta, Biblical and Early Christian Studies