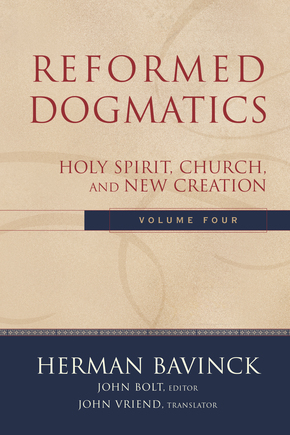 "What a wonderful gift to the English-speaking theological world! The topics explored by Bavinck are still of the utmost importance, and he addresses them here in a theological voice that is amazingly fresh."--Richard J. Mouw, Fuller Theological Seminary

In partnership with the Dutch Reformed Translation Society, Baker Academic is proud to offer in English for the very first time the fourth and final volume of Herman Bavinck's complete Reformed Dogmatics, now also available as a four-volume set. This volume includes the combined indexes for all four volumes. In addition, editor John Bolt introduces each chapter and has enhanced the footnotes and bibliography. This masterwork will appeal not only to scholars, students, pastors, and laity interested in Reformed theology but also to research and theological libraries.

"Herman Bavinck has often been unjustly overshadowed by Abraham Kuyper, especially in the English-speaking world. The unavailability in English of his crowning work, Gereformeerde Dogmatiek, has been a particularly significant lack. Bavinck's breadth, thoroughness, rigor, ecumenical interests, and spiritual fervor are clearly on display in this careful and readable translation. It is a splendid gift to theological studies and will contribute to redressing the neglect of this faithful servant of Christ and his church."--Stephen R. Spencer, Wheaton College

"A welcome addition to the works of Bavinck in English."--Donald G. Bloesch, emeritus professor of theology, University of Dubuque Theological Seminary

"What a wonderful gift to the English-speaking theological world! The topics explored by Bavinck are still of the utmost importance, and he addresses them here in a theological voice that is amazingly fresh. I pray that the appearance of this volume signals the beginnings of a Bavinck revival!"-Richard J. Mouw, Paul B. Henry Institute for the Study of Christianity and Politics, Calvin University

"Finally Bavinck becomes available to the English-speaking world. The Dutch version has been a constant stimulus for students, pastors, and other interested Christians. It has shaped generations of theologians and helped them to preach, think, and act on a fresh, Reformed basis. The strength of Bavinck's Dogmatics is that it's neither conservative nor progressive, but its biblical character makes it constantly up-to-date. Baker and the Dutch Reformed Translation Society deserve praise for this project, from which without doubt church and theology will profit for years to come."--Herman Selderhuis, Theologische Universiteit Apeldoorn

"Bavinck is one of the premier Reformed theologians, but till now much of his magnum opus has not been accessible to English-language readers. We owe a great debt of gratitude to those who have made the treasures of Bavinck's thought available to a new world of appreciative hearers."--Donald K. McKim, editor, Encyclopedia of the Reformed Faith

"Bavinck's Reformed Dogmatics has been the fountainhead of Reformed theology for the last hundred years. It is by far the most profound and comprehensive Reformed systematic theology of the twentieth century. The reader will be amazed by Bavinck's erudition, creativity, and balance. Bavinck is confessionally orthodox, but he recognizes the need to rethink the traditional formulations from Scripture in the context of contemporary discussion. I hope these volumes will have a large readership and will bring forth much theological and spiritual fruit."--John M. Frame, professor of systematic theology and philosophy, Reformed Theological Seminary

"This is one of those seminal works that embodies a significant portion of our Reformed theological heritage. We all should rejoice to see this material finally available in English!"--Samuel T. Logan Jr., Westminster Theological Seminary

"Bavinck's Reformed Dogmatics continues to be the standard of modern orthodox dogmatics in the Reformed tradition. It not only is encompassing in content but also shows everywhere a profound insight into the basic problems that a Reformed theology has to face and a deep sensitivity for modern culture. The combination of both made his work famous, and studying his work is fruitful also for a new generation."--Cornelis van der Kooi, Free University, Amsterdam

"Despite all the important contributions that Dutch Calvinists have made to North American Protestantism, Herman Bavinck remains an obscure figure, lagging behind the influential Abraham Kuyper. With the translation and republication of Bavinck's Reformed Dogmatics, this unfortunate situation should change for the better. These four volumes demonstrate the importance and mastery of Bavinck's own contribution to Reformed theology, while providing a useful and striking point of comparison with the best-known twentieth-century Reformed dogmatics, that of Karl Barth. At a time when the scholastic nature of systematic theology has come under serious criticism, Bavinck's Reformed Dogmatics reveals the advantage of careful and sustained reflection on Christian truth that is both faithful to the church and engaged with the academy. Readers will discover more than Bavinck the theologian in these volumes; they will learn about the God whom he worshiped and served."--D. G. Hart, author of The Lost Soul of American Protestantism

"Bavinck's Dutch masterwork was the Everest of which the textbooks by Louis Berkhof and Auguste Lecerf were foothills and Berkouwer's studies in dogmatics were outliers. Like Augustine, Calvin, and Edwards, Bavinck was a man of giant mind, vast learning, ageless wisdom, and great expository skill. Solid but lucid, demanding but satisfying, broad and deep and sharp and stabilizing, Bavinck's magisterial Reformed Dogmatics remains after a century the supreme achievement of its kind."--J. I. Packer, professor of theology, Regent College

"Arguably the most important systematic theology ever produced in the Reformed tradition. I have found it to be the most valuable. English-speaking theology throughout the 20th century until now has been singularly impoverished by not having at its disposal a translation of Bavinck's Dogmatiek in its entirety. The appearance of these volumes will be an incomparable boon for generations of students, pastors, teachers, and others, serving to deepen understanding and enrich reflection in both historical and systematic theology."--Richard B. Gaffin, Jr., professor of biblical and systematic theology, Westminster Theological Seminary, Philadelphia

"Kudos to Baker Academic, and the Dutch Reformed Translation Society, on the completion of a highly important project. With the publication of Herman Bavinck's Reformed Dogmatics, Volume 4 . . . the key work of a central Dutch Reformed theologian is at last available in its entirety to the English-speaking world."--Michael Potemra, National Review

"Anyone who studies Bavinck with care discovers an extraordinary intellect at work, coupled with a heart that loves God's Word and trusts its Author. In this volume, like the others, we find the rare combination of scholarship that is at once biblically perceptive, confessionally Reformed, philosophically astute, and historically erudite. . . . The same competent work of translating and editing evident in the three earlier volumes is apparent in this one as well. John Bolt, the editor, provides readers with helpful summaries of Bavinck's discussion at the head of each chapter. This fourth volume is also marked by a comprehensive bibliography covering its contents, as well as a combined Scripture index, a combined name index, and a combined subject index for all four volumes of the Reformed Dogmatics. . . . Bavinck's dogmatic project, rooted as it is in Scripture and in constant conversation with both modern voices and the wide, deep Reformed institution of theology, is an opportunity for non-Reformed writers to examine a fine specimen of the Reformed legacy and for those committed to the Reformed confessional tradition to deepen their understanding of it. Bavinck shines as a teacher, for he is a master theologian."--J. Mark Beach, Mid-America Journal of Theology

"We are all indebted to Baker Book House and the Dutch Translation Society for furnishing the English speaking world with this complete set [of] Reformed Dogmatics. . . . This volume begins with a most helpful 'Editor's Introduction' written by John Bolt of Calvin Seminary. He greatly assists the reader in contextually placing Bavinck. . . . This English translation of Bavinck's Dogmatics is absolutely impressive, and the apparatus which accompanies it in volume four has very few rivals. . . . It covers the various loci thoroughly with excellent footnotes for further research. Generally every page contains numerous biblical references allowing one to see the foundation of systematic theology arising from Scripture. Bavinck does engage in many pastoral implications to his theology which often helps to bring a reflective tone. Each new chapter begins with a well-written introduction set out with italic type. These are most useful and are free of footnotes and Scripture references. They frequently provide some historical dogmatic allusions which enhance their usefulness. . . . This is clearly a fine compilation of the author's perspective on Reformed ecclesiology in the late nineteenth century. . . . Every theological college must purchase Reformed Dogmatics: Holy Spirit, Church, and New Creation as here is a wealth of study on pneumatology, ecclesiology and eschatology. In fact, the whole set (four volumes) should be in every theological library. Herman Bavinck surely was encyclopedic in his knowledge, and we are richer for having this before us in English."--Jack C. Whytock, Haddington House Journal

"To read Bavinck is an education and a joy for all who love the Reformed faith. The contents of this concluding volume are rich. . . . The translating and editing of volume four are consistently excellent, particularly the summations of the chapters by John Bolt. Volume four ought to be in the library of every Reformed minister of the word. The Reformed laity will find the book readable and profitable."--David J. Engelsma, Protestant Reformed Theological Journal

"The editor John Bolt, translator John Vriend, and the support of the Dutch Reformed Translation Society are to be congratulated on this book, the final volume of Bavinck's Dogmatics. . . . Each chapter has been provided with a synopsis, making this--along with the other three volumes--a rich resource for those studying either the history of dogma or the relationship between the Christian message and culture. . . . This final volume comes with a rather comprehensive cumulative bibliography as well as comprehensive indices of all four volumes for Scriptural references, names, and subjects. . . . [It] offers to the English-speaking world, and specifically to those involved in the church's mission both nationally and globally, a model, but perhaps more importantly, a paradigm of Trinitarian discipleship for how theology should interact and question (and be questioned by) the cultures of the time."--Iain S. Maclean, Missiology

"With the release of this final volume, the entire work [Reformed Dogmatics] is available in English for the first time. . . . There are three combined indexes, of Scripture, names, and subjects. Thus the student of Bavinck will find in this volume a helpful resource for the location of major topics in the other volumes. The translation of Bavinck's work into English is a welcome addition to resources for study of Reformed theology. Even those who are not Reformed in their theological heritage can gain much from Bavinck's clear presentation of Christian theology. . . . This is not easy reading, but it is worthy of the work that is required to mine the depths of Bavinck's comprehensive and thoughtful summary of the Dutch Reformed tradition. Those who desire to understand the faith once for all delivered to the saints will be rewarded for a careful and systematic reading of the work in these four volumes. The theological community owes a debt of gratitude to the Dutch Reformed Translation Society for its excellent work in bringing this project to completion."--Glenn R. Kreider, Bibliotheca Sacra