series: Daughters of the Promised Land 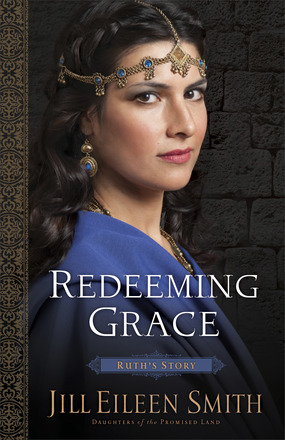 One devoted woman is about to discover the power of love

When famine visits Bethlehem, some hold out hope for rain, while Naomi and her family make a long journey to Moab in search of greener pastures. The harvest there is plentiful, and for a time it appears the Lord is blessing them. But when calamities strike, one after another, Naomi is left alone in a foreign land with only her widowed daughters-in-law for comfort.

Downhearted and destitute, Naomi is determined to return to Bethlehem alone. But her daughter-in-law Ruth refuses to leave her side. Despite the fact that she and Naomi will almost certainly live out their days in widowhood and poverty, Ruth holds out hope for a better future . . . and maybe even a second chance at love.


Praise for the Daughters of the Promised Land series

"Both a well-drawn love story as well as the wistful imaginings of early Israel."--Publishers Weekly


Jill Eileen Smith is the author of the bestselling Wives of King David series, The Crimson Cord, and The Prophetess, as well as the Wives of the Patriarchs and the Loves of King Solomon series. Her research has taken her from the Bible to Israel, and she particularly enjoys learning how women lived in Old Testament times. She lives with her family in southeast Michigan.

Praise for The Crimson Cord

"Impeccable research and vivid prose from Smith bring the ancient city of Jericho to life."--Library Journal

"Smith, the author of the bestselling Wives of King David and Wives of the Patriarch series, has made Rahab's dramatic tale newly affecting and vivid."--Booklist

"Don't hesitate to recommend this first book in the Daughters of the Promised Land series to lovers of biblical fiction."--CBA Retailers+Resources


Praise for The Prophetess

"This is both a well-drawn love story as well as the wistful imaginings of early Israel."--Publishers Weekly

"Deborah is portrayed as a strong leader and a sensitive, protective mother, making this powerful biblical figure accessible to readers."--RT Book Reviews

"At last, the mystical figure of Deborah comes to life! With obvious research and attention to detail, Jill Eileen Smith gives vivid voice to the women at the center of Israel's victory over Canaan. A tale of strength and faith that bears relevance even today. Not to be missed!"--Tosca Lee, author of The Legend of Sheba and multiple New York Times bestsellers