Readings from the Ancient Near East 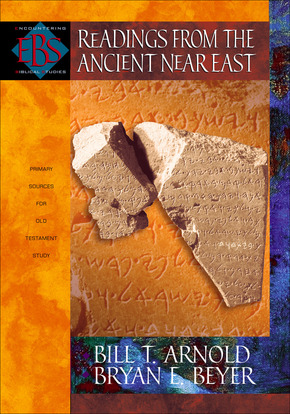 "A conveniently organized, affordable, and thoughtful anthology of Ancient-Near-Eastern texts to aid the study of the Old Testament in its ancient context."--James D. Nogalski, Review and Expositor

Essential to a proper understanding of the Old Testament is a knowledge of the political, historical, and theological environment of the ancient Near East. While there is an abundance of material explaining this environment, primary source texts are often unavailable or inaccessible to the beginning Old Testament student.

This volume in the Encountering Biblical Studies series fills that void. Readings from the Ancient Near East takes the student through a wide variety of primary source texts from the ancient Near East that illuminate every book of the Old Testament. It is the companion volume to Encountering the Old Testament, coauthored by Bill Arnold and Bryan Beyer.

The editors have compiled this volume with the beginning Old Testament student in mind. The selections are intended to move a learner with little or no knowledge of the ancient Near East to a basic understanding of its significant texts and authors.

"There are a number of new volumes of translated ancient texts that might be of interest to students of the Bible, but most are either far too long or too narrowly focused to be used as companions to an undergraduate Bible course. This new volume promises a convenient, affordable reference for some of the most important writings that help us understand the world of the Old Testament."--Daniel Fleming, New York University

"The editors' familiarity with the primary sources has resulted in a careful selection of material judiciously arranged to be of maximum benefit to the student seeking acquaintance with the vast literature of the ancient Near East relating to the Old Testament."-John Walton, Wheaton College

"Readings from the Ancient Near East is a well-selected and well-introduced anthology. It is a natural and obvious choice as a textbook for introductory courses and is without doubt the most comprehensive, up-to-date, and affordable volume of its kind on the market."-Brent A. Strawn, Candler School of Theology, Emory University

"Our understanding of the Hebrew Bible is enhanced when we are familiar with similar texts from the ancient world. Until now it has been difficult to introduce students to these ancient texts because only two types of translations existed: too large (and expensive!) or too small (and superficial!). The publication of Readings from the Ancient Near East solves this problem by providing complete translations of many important Near Eastern texts relating to the Hebrew Bible. With this volume, Arnold and Beyer bring us a step closer to becoming competent readers of Scripture."-Kent Sparks, Eastern University

"This wonderful treasury of key ancient Near Eastern writings provides the essential background for interpreting the Bible in its original context. As an affordable and well-chosen selection of so many important literary works, it fills a need for a modern version of older anthologies that can be used in college survey courses on the Old Testament and its world."-Richard S. Hess, Denver Seminary

"It is paramount that students of the Bible learn the rich textual heritage of the ancient Near East, and this great resource helps them do just that. But this volume is not only for university students. The work can easily be used by the layperson or pastor at the neighborhood church as a fascinating resource on the greater literary world of the Old Testament. This is probably the best small single-volume work of its type to appear in over thirty years."-Mark W. Chavalas, University of Wisconsin-Lacrosse

"This anthology of ninety-one texts is well-chosen and the texts are arranged according to the canonical order of the English Bible to which they correspond, namely Pentateuch, historical books, poetic books, and prophetic books. This arrangement lends itself to ready use in an Old Testament survey course for students commencing Old Testament study."--Greg Goswell, Reformed Theological Review

"Readings from the Ancient Near East presents the reader with a vivid experience of cultures adjacent to the biblical world. . . . The arrangement provides the undergraduate student with a clear comparison between the text and its biblical referent. . . . Readings is well suited to courses introducing ancient cultures."--G. L. Jardim, Old Testament Essays

"The goal of this book is to provide undergraduate students with 'a basic collection of the ancient Near Eastern texts that most closely parallel or complement the biblical text.' I should say from the outset that this volume achieves this goal admirably and in so doing meets the need for an introductory anthology of primary sources from the world surrounding ancient Israel. . . . If texts only make sense in context, then the study of the literature of the ancient Near East needs to keep playing an important role in Old Testament interpretation. Arnold and Beyer's informative book contributes to both disciplines by encouraging a new generation of students to explore the thought world inhabited by the ancient biblical writers."--Douglas J. Green, Scottish Bulletin of Evangelical Theology

"Arnold and Beyer's Readings from the Ancient Near East is the promised supplement volume to their Encountering the Old Testament. This latest in Baker's ongoing Encountering Biblical Studies collects 91 of the most significant of the primary source documents from the extra-biblical material into one handy volume. . . . This new volume nicely complements their previous book."--G. Lloyd Carr, Journal of the Evangelical Theological Society

"Excellent for beginners and many intermediate students. . . . There is nothing like this collection that includes such breadth at low cost. It would be a very appropriate reference work for many students to acquire."--P. J. Williams, Themelios

"This [book] gives useful information about ancient customs, false gods, pagan religious practices and sometimes the names of Bible characters mentioned in inscriptions. . . . Old Testament professors need this book. A pastor could benefit from it, especially if his library is weak or outdated in the area of archaeology."--Steven Waterhouse, Conservative Theological Journal

"A useful and affordable collection. . . . It can function well as a textbook for an undergraduate survey course on the OT world, and can also be of use to other interested readers."--J. Jarick, Journal for the Study of the Old Testament

"This work is of much help to both students and scholars."--International Review of Biblical Studies

"This text will be well suited for undergraduate classes in OT backgrounds or ancient Near Eastern history."--Ralph K. Hawkins, Catholic Biblical Quarterly

"This anthology of ninety-one texts from the Ancient Near East has resources for every part of the Old Testament, and the editors have done a great job of removing archaic English and providing a pleasing layout on the page."--Ralph W. Klein, Currents in Theology and Mission

"The editors of this anthology . . . have rendered a valuable service to both teachers and serious students of the Old Testament. . . . It is important for the well-educated student to read and learn first-hand from other contemporary documents which parallel the Old Testament in both subject matter and literary style. This attractive, small, one-volume, reasonably priced work meets that academic need admirably! . . . This book is a valuable addition to the field of Old Testament studies. It provides easy access to relevant, contemporary documents from the ancient world which are outside our Old Testament but which are contemporary to it."--Bill Tolar, Southwestern Journal of Theology

"This volume targets a college-level audience and is guided by presuppositions consistent with a conservative, evangelical approach. . . . Readings presents . . . recent discoveries, has integrated black and white illustrations throughout, is cast in language that is easy to digest, and contains editorial comments by two respected evangelical scholars. Undoubtedly, Readings will be a serious contender in the market of textbooks that offer access to primary source materials."--Mark Ziese, Stone-Campbell Journal

"The Encountering Biblical Studies series is providing a fresh new set of textbooks designed for biblical studies at the undergraduate level. . . . In Readings from the Ancient Near East, Arnold and Beyer provide a collection of ancient Near Eastern texts that supplement their Encountering the Old Testament survey in this series. . . . The reading of these texts is made more accessible to the undergraduate student by the updating of the English translations when necessary and by the simplification of the various symbols and markings inherent to the translation and presentation of ancient texts. . . . Arnold and Beyer have rendered a tremendous service to undergraduate teachers and students of the OT. Whereas the major anthologies remain too large and expensive for the average college student, and since many OT surveys often contain only brief segments of ancient Near Eastern texts, Readings from the Ancient Near East provides an affordable and well-balanced collection of such texts. Used in conjunction with OT survey texts, like the one Arnold and Beyer have produced, this anthology should serve as a very helpful introduction to the larger world of the ancient Near East. Coupled with substantive teaching concerning the relationship of the Bible to its ancient world, this collection should then enable the student to gain a richer understanding of the OT in its historical and literary contexts."--J. Nathan Clayton, Trinity Journal

"In addition to the smooth English of the translations, [the authors'] attractively bound and reasonably priced book includes illustrations, a map, and helpful introductions to each text. Students should find the book engaging as well as accessible, and I plan to list it as a supplementary anthology for my course."--Biblical Historian

"Readings from the Ancient Near East is packaged very well for easy use by undergraduates and thus will present the ancient Near East to these readers in a very stimulating way. . . . This is a very handy volume that will be very useful as an affordable teaching tool in introductory courses, especially since the entries were very carefully selected and edited. . . . This is probably the best small, single-volume work of this type in English to appear in over thirty years."--Mark W. Chavalas, Journal of Near Eastern Studies