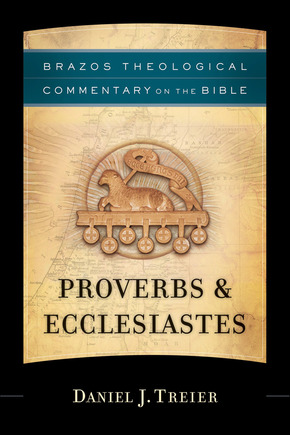 Pastors and leaders of the classical church interpreted the Bible theologically, believing Scripture as a whole witnessed to the gospel of Jesus Christ. Modern interpreters of the Bible questioned this premise. But in recent decades, a critical mass of theologians and biblical scholars has begun to reassert the priority of a theological reading of Scripture. The Brazos Theological Commentary on the Bible enlists leading theologians to read and interpret Scripture for the twenty-first century. In this addition to the well-received series, Daniel Treier offers theological exegesis of Proverbs and Ecclesiastes.

"Treier's new commentary is a rare gift: rich theological reflection and wisdom from and on Proverbs and Ecclesiastes. It fills a serious gap in much Christian thought and practice by providing a biblically based creation theology that addresses ordinary human life in its God-related richness and complexity. Last but not least, it is readable and absorbing. May Treier's tribe increase!"--Raymond C. Van Leeuwen, professor of biblical studies, Eastern University

"What a splendid idea! Many preachers have been longing for more commentaries that are not only exegetical but theological in the best sense: arising out of the conviction that God, through his Word, still speaks in our time. For those of us who take our copies of Martin Luther's Galatians and Karl Barth's Romans from the shelves on a regular basis, this new series in that tradition promises renewed vigor for preaching, and therefore for the one, holy, catholic, and apostolic church in our time."--Fleming Rutledge, author of The Bible and The New York Times and The Seven Last Words from the Cross

"Treier generally offers valuable commentary for the layperson but especially for the preacher. His insistence on reading the books in their entirety (particularly Ecclesiastes) and also dialectically ensures a richer understanding of both. Undoubtedly Treier's greatest contribution is that he helps the reader appreciate the depth of these books and the nature of the wisdom that they contain."