A First Course for the Curious Christian 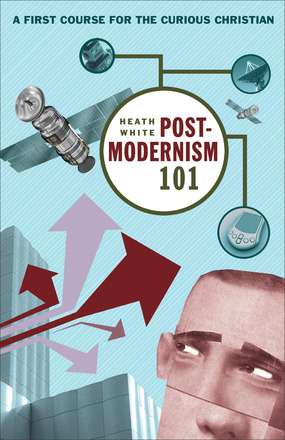 "Postmodern ideas, sensitivities, authors, and theories are engaged with an openness that stands in welcome relief to the kind of knee-jerk evangelical reactionism that so often dominates the scene. This book demonstrates a clarity of language without being simplistic and a conciseness of presentation that is not facile."--Brian Walsh, coauthor of Colossians Remixed

Imagine a book about postmodernism that intelligently discusses its central ideas and relationship to Christianity--but never uses the words epistemology or hermeneutics. Heath White has provided exactly that in Postmodernism 101: A First Course for the Curious Christian.

In this brief and highly accessible introductory work, White paints the historical and philosophical background underlying postmodernism in understandable, but not oversimplified, language. He explores the differences between premodern, modern, and postmodern thought. He then describes what postmodernism means to our view of self, language, thought, the search for knowledge, and culture, ultimately encouraging Christians to face the postmodern world with hope and courage, not fear.

White's down-to-earth approach invites Christians who otherwise might have avoided postmodern theorizing into this important dialogue, while also providing vital information for those already engaged in the conversation. His questions for further thought after each chapter and suggestions for further reading provide a journey for readers beyond the text.

This book is ideal for undergraduates and seminary students, as well as curious pastors and lay readers.

"White provides an accessible and helpful introduction to postmodern thought and its relationship to Christian faith that leaves readers with a reliable framework for thoughtful engagement between the ministry and witness of the gospel and our emerging culture."--John R. Franke, author of The Character of Theology

"There is something wonderfully hospitable about this book. Postmodern ideas, sensitivities, authors, and theories are engaged with an openness that stands in welcome relief to the kind of knee-jerk evangelical reactionism that so often dominates the scene. And White's exposition of postmodern ideas welcomes the reader into a world that initially might not feel too safe. This book demonstrates a clarity of language without being simplistic and a conciseness of presentation that is not facile. Indeed, this is a book rich in wisdom. And as a 'First Course for the Curious Christian' it engenders a hunger for more."--Brian Walsh, coauthor of Colossians Remixed

"Postmodernism 101 is a delight to read. Heath White knows how to take a very difficult subject and make it easy to understand without being simplistic. I love the way he situates our understanding in the current cultural shift from modern to postmodern times. This book will be very helpful to all who want to know why they should be interested in the postmodern situation."--Robert Webber, author of Ancient-Future Faith

"Don't let the 'first course' language fool you. This is a five-course feast, presented on philosophical platters of gold and literary pitchers of silver. Premodern, modern, and postmodern people need to read this and discover what each offers each other."--Leonard Sweet, author of Postmodern Pilgrims and SoulTsunami

"Confused about postmodernism? Baffled by what it means? Begin here. More than an introduction to postmodernism, Postmodernism 101 situates the reader in today's culture at the end of one era and the beginning of another. Then it charts a way forward that is fully Christian and profoundly practical."--James W. Sire, author of The Universe Next Door and Why Good Arguments Often Fail

"Want to learn about postmodernism and how it affects our selves and our culture? Begin with this book. Postmodernism 101 is not only an introduction to modern culture but an antidote to letting the world squeeze you into its mold. A highly successful blending of theory and practice."--James W. Sire, author of The Universe Next Door and Why Good Arguments Often Fail

"Postmodernism 101 is an excellent first book on a very complex and confusing shift in contemporary culture. Heath White sets postmodernism in the context of both modernism and premodernism. Then he unpacks its significance to our selves and our culture, truth and power, language and thought, morality and history, and a host of related themes."--James W. Sire, author of The Universe Next Door and Why Good Arguments Often Fail

"While not among the first titles to present a Christian perspective on postmodern thought, this is among the best. White . . . offers an astute and highly readable analysis that demystifies without oversimplifying. As he escorts readers through characteristic postmodern perspectives on authority, the self, language, morality and history, White undertakes 'to address these concerns with postmodernism in a faithful and loving way rather than a smug or defensive or panic-stricken one.' The resulting discussion is well balanced between appreciation and criticism. . . . Instead of engaging postmodernism as an opponent, White invites readers to consider how postmodernism might present 'an opportunity to rethink both the presentation and the content of the good news about Christ.'"--Publishers Weekly (starred review)

"[White] presents a clear, accessible introduction to postmodern thought that should be easily digested by general readers. He details the track of human thought from the premodern to the modern to the emerging postmodern eras and through a range of topics that include views on truth, reason, ethics, the self, language, and history. Written in an enjoyable and pleasant style, the text builds upon itself to create a teacher/student-like relationship, with insightful 'For Further Thought' questions ending each chapter. As noted in the subtitle, White's book is aimed at a Christian audience, but his stance is broad enough to be helpful to anyone curious about postmodern ideas. Suggestions for further reading are also provided. Recommended for most settings."--Jason Moore, Library Journal

"[White] takes big, important ideas and explains them in a way that helps the reader understand why they matter. White has three aims: first, to explain what postmodernism is; second, to help evangelicals see why understanding it matters; and third, to help Christians respond to postmodernism thoughtfully and constructively. White succeeds at all three aims without getting bogged down in scholarly jargon. He addresses difficult issues through clear illustrations, writing like a storyteller rather than an academic. . . . The book lends itself to discussion groups. A well-written 'For Further Reading' section will help interested readers delve more deeply. . . . This is the best layperson's introduction I've seen to postmodernism, period."--David L. O'Hara, Prism

"Heath White has written a great introduction to post-modernism. I found it easy to read, well thought out, and very informative. By giving a brief history lesson on pre-modernism, the modern mind and its transition to post-modernism, he has succeeded in showing the natural progression and how the different eras and patterns of thought and culture have transitioned one into the other. In discussing post-modern thought, he covers each of the defining aspects of it briefly, yet in such a way that I came away feeling confident in my understanding of the issues."--Youthworker Journal

"The stated purpose of the book is to elucidate the main ideas of postmodernism and offer some suggestions for how Christians ought to deal with this new way of thinking. White . . . executes this task with grace and aplomb. His philosophical training and able pen allow him to communicate difficult ideas clearly and efficiently. . . . White's various answers to this question [of how evangelical Christians ought to respond to the challenges of postmodernism] are pragmatic and thoughtful, leaning more towards the pastoral than the theoretical. . . . White's attempts to equip evangelical Christians for this important conversation are . . . most welcome."--Ian Marcus Corbin, Cresset

"One of the clearest [books on postmodernism] for beginners so [it] would make an excellent introduction."--Byron Borger, heartsandmindsbooks.com

"[A] brief and illuminating introduction. . . . White accomplishes by the end of the book precisely what he sets out to do at the beginning by offering a clear, instructive survey of the major themes of postmodernism and considering how Christians might respond to its various emphases. With its lucid presentation, personal style, and questions at the end of each chapter for further thought, this book will prove beneficial to pastors or ministers seeking guidance or material for discussions with adults or youth groups, students requiring an accessible introduction to the field, and any Christian with an interest in understanding the contemporary culture and Christianity's place within it. . . . White's introduction will certainly provide insight and guidance for the church as it moves forward in the twenty-first century."--David McNutt, Anvil