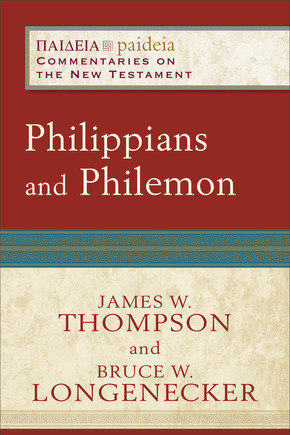 Two respected senior New Testament scholars examine cultural context and theological meaning in Philippians and Philemon in this addition to the well-received Paideia series. Students, pastors, and other readers will appreciate the historical, literary, and theological insight offered in this practical commentary.

"Thompson and Longenecker have produced a first-rate commentary for contemporary students. The authors provide a guide to larger scholarship but offer their own assessments based on scrupulously careful readings of the text. The theological comments offer a model of how careful readings of these texts can and cannot be used in discussions of contemporary issues. I recommend it enthusiastically for students and ministers who are serious about the biblical text."

"Thompson and Longenecker are two seasoned scholars who have added a worthy contribution to the distinguished collection of commentaries in the Paideia series. Paul's letters to the Philippians and to Philemon, so different and yet related, are thought through carefully, with the many alternate interpretations sifted and weighed and with theological implications for today thoughtfully presented."

"With informed imagination and exegetical skill, Thompson and Longenecker open up two of Paul's most personal and engaging letters. With attention to Paul's scriptural, rhetorical, and cultural resources, they take us deep into Paul's faith and thought-world in ways that show the creative power of the gospel. The commentaries are enriched by engagement with biblical scholarship ancient and modern. The interweaving of Christian theological reflection with the authors' own wisdom opens the way for the essential next step in reading Scripture: contemporary appropriation. Highly recommended!"

"Paul's letters to the Philippians and Philemon combined are just five chapters in length but are incredibly rich in theological content as well as socio-historical and hermeneutical complexity. Interpreters of Paul can thus rejoice that Thompson and Longenecker have expounded these two epistles with admirable exegetical skill, theological sensitivity, and enviable clarity. Highly recommended."

"Quality commentators both raise and respond to questions spawned by a careful reading of the text; quality commentaries both whet and sate readers' appetites with respect to such questions. Philippians and Philemon is a quality commentary composed by quality commentators. Thompson and Longenecker are to be congratulated for making these two beloved Pauline letters more understandable and, as a result, even more meaningful. I encourage readers of this valuable volume not just to dip into but to dive into the latest work of these skilled senior scholars."

"Thompson and Longenecker transport their readers to a Roman colony in northern Greece and to the household of an ancient slaveholder, allowing us to discern what Christian converts in those environments would have heard in Paul's brief but influential letters of exhortation. The commentary employs rhetorical analysis to good effect in clarifying the argument of the letters and also identifies theological issues of continuing concern. The introductions and paragraph-by-paragraph commentary are informed by current scholarship but keep the text of the letters clearly in focus. Those seeking a companion to reading Paul's letters to the Philippians and Philemon will be well served by this addition to the Paideia series."

"Out of all the commentaries I've read and reviewed recently, I definitely like Thompson (on Philippians) and Longenecker (on Philemon). . . . This is written in a very readable style, concise, good on Greco-Roman context, and judicious in its exegesis. . . . Sensible discussions and very helpful charts and tables. This is worth having!"

"Both authors fulfill the series aim of rooting the letters in their ancient setting (social, cultural, rhetorical) while focusing on the primary text for contemporary readers. Nevertheless, they engage with other NT scholars. I found discussions clear, engaging, and thought-provoking. . . . Another valuable addition to the series."

"The Paideia series is directed to seminarians and to theology and university students looking for solid biblical study. These quality commentaries offer detailed information on the background, content, and literary form of the New Testament texts but do so in a nontechnical manner. In this volume two veteran scholars provide rich commentary on two of Paul's most beautiful and enticing letters."

"James Thompson and Bruce Longenecker have added another useful volume to the student-oriented Paideia series. . . . Both commentators make critical issues accessible, including showing why they matter. They will help students understand these letters and move them toward becoming critical readers. . . . This book is a valuable resource for students and pastors who want accessible, solid biblical scholarship with helpful suggestions about its theological value today."

"[The authors] are well-qualified, seasoned NT scholars. Both have done significant work in Pauline studies and in NT rhetoric. . . . A number of maps, charts, pictures, and textboxes throughout the commentary aid the readers' learning experience. This volume is a worthy addition to the Paideia commentary series. . . . Both commentators are strong in offering and engaging alternative options and for keeping the reader in the flow and argument of the text. Scholars, seminary students, and teachers, both in the academic classroom and those in teaching roles in churches, will find this commentary valuable for staying focused on the intent of the text and making reasonable applications today."