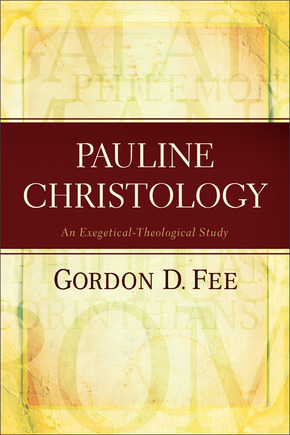 An exhaustive study of Pauline Christology by noted Pauline scholar, Gordon Fee. The author provides a detailed analysis of the letters of Paul (including those whose authorship is questioned) individually, exploring the Christology of each one, and then attempts a synthesis of the exegetical work into a biblical Christology of Paul.

The author's synthesis covers the following themes: Christ's roles as divine Savior and as preexistent and incarnate Savior; Jesus as the Second Adam, the Jewish Messiah, and Son of God; and as the Messiah and exalted Lord. Fee also explores the relationship between Christ and the Spirit and considers the Person and role of the Spirit in Paul's thought. Appendices cover the theme of Christ and Personified Wisdom, and Paul's use of Kurios (Lord) in citations and echoes of the Septuagint.

"Anyone who has read even a smattering of Paul's writings recognizes early on that his devotion to Christ was the foremost reality and passion of his life. What he said in one of his later letters serves as a kind of motto for his entire Christian life: 'For me to live is Christ; to die is [to] gain [Christ]' (Phil. 1:21). Christ is the beginning and goal of everything for Paul, and thus is the single great reality along the way."--From the Introduction

"Gordon Fee has done it again! Having given us the standard work on Paul's understanding of the Holy Spirit, he has now filled a surprising gap in Pauline studies by writing a remarkably comprehensive and detailed account of Pauline Christology. His work helpfully (and rightly) covers all the letters in the Pauline corpus. He draws on his close, lifetime study of the material to present a clear and gripping account of Paul's high Christology in constant reasoned debate with scholars who interpret the material in other ways. It will at once take its place as the major study of this crucial topic, and its innovative proposals regarding some of the texts will stimulate a lively ongoing debate."

"Thoroughly researched, comprehensive, and wide-ranging, this solid study is arranged in such a way that it is useful not only for its total impact, pointing as it does to the coherence of Paul's christological thought, but also for its careful exegetical studies of individual passages. The book also includes such helpful features as a careful consideration of Paul's use of the Septuagint, an equally careful study of Paul's own linguistic characteristics, and a series of appendices listing christological references found in each of the Pauline letters. Use of this clearly written and persuasively argued study will put the reader deeply in Fee's debt. It is a volume to be highly recommended."

"Paul told the Corinthians that he 'decided to know nothing among you except Jesus Christ, and him crucified' (1 Cor 2:2), yet no books dedicated solely to illuminating Paul's Christology existed until now. This big book by a masterful Pauline scholar fills that void. In a magisterial way, Gordon Fee corrals the evidence in the letters, each having their own christological emphases, and provides exegetical gems along a delightful tour that unfolds Paul's high Christology. This extraordinary book is itself a tour de force."

"Gordon Fee's Pauline Christology is the only truly comprehensive study of Paul's teaching about the person of Christ, and for this reason alone it is well worth reading. But more importantly, Pauline Christology is Fee at his best. His exegetical work is fresh, engaging, and independent. He is not afraid to challenge some current academic 'assured results,' and whether one finally agrees with him or not, his arguments need to be seriously considered. Particularly noteworthy is Fee's sustained and generally convincing argument for what some are calling 'christological monotheism,' according to which Christ is included by Paul and other NT authors within the definition of 'God.' The book is therefore fundamentally important not only for both Pauline and NT theology but also for countless specific exegetical analyses."

"Fee's Pauline Christology is quite simply the best work to have ever been written on Pauline Christology. This is not only because it is the first modern scholarly work to be dedicated to this subject, but also because of Fee's exegetical insightfulness as well as some of his methodological choices. . . . As with almost all of Fee's work, his exegesis is generally fair and very clear. It is easy to follow. . . . It is an enormously helpful and insightful volume, one with which every student of Paul will need to become familiar."--Chrisedom blog

"Gordon Fee . . . is one of the foremost Evangelical scholars in North America. He brings his great erudition and theological insight to bear on the topic of Paul's christology, which strangely, as Fee points out, has not been the subject of many explicit book-length studies. This work, encyclopedic in its length and format, goes a long way toward making up for such neglect. . . . The exegetical groundwork of the first section is followed by a second half of the volume that weaves the conclusions from these studies into a synthesis under various titles . . . or categories of interpretation. . . . There is no doubt that this substantial study will be a reference point for some time to come."--Donald Senior, CP, The Bible Today

"This is a monumental book--in some respects, even a watershed book--in both size and significance."--James Swetnam, SJ, Catholic Biblical Quarterly

"Fee's book is the most thorough and compelling account of Paul's Christology to date and is nothing short of a great achievement. It is sure to remain the standard in the field for some time to come."--Don Garlington, Review of Biblical Literature

"To say that this work is monumental is to understate the case. Although one may have a few quibbles with some of the conclusions reached here, Fee has still managed to offer compelling readings of key texts, all the while filling a large lacuna in Pauline scholarship. He helpfully walks the reader through his exegetical decisions one text at a time and provides a synthesis that gathers all the relevant data under consideration, making this a goldmine of a reference book. Any future work on Paul's Christology or christological studies in general will be forced to reckon with this magnificent volume."--Matthew D. Montonini, Review of Biblical Literature

"Readers cannot go wrong in purchasing this book--loaded with excellent coverage of a quintessential Christian doctrine. Fee is clear: Jesus is an object of worship, to whom Paul is completely devoted. May we be likewise."--Bradford McCall, Pneuma Review

"A seminally important work that promises to become a standard text. . . . Pauline Christology is a very welcome addition to Pauline studies, filling a gap in the scholarly literature. It is essential reading for NT scholars, and of course, especially for those who know and love Paul."--G. W. Peterman, Journal of the Evangelical Theological Society

"Fee's work is a welcome and worthy exegetical and theological treatment of an important subject. Time will no doubt prove its worth in New Testament studies."--Tony Costa, Toronto Journal of Theology

"Fee's benchmark study on Pauline Christology is impressive for its breadth and specificity. Fee begins by discussing current perspectives on Pauline Christology. In part one he scrutinizes all the Pauline letters in chronological order with sections involving descriptions and titles. . . . At the end of each chapter he supplies an appendix of the texts in Greek and 'An Analysis of Usage.' Part two, designated 'synthesis,' consists of systematic observations on each of the previously mentioned topics. The book concludes with an appendix on wisdom. Fee ends with an extended bibliography, and indices of modern authors, subjects, and ancient sources. Fee dialogues with an impressive range of international authors. . . . This book is highly recommended for seminary courses in Christology and for graduate seminars in Pauline theology."--Religious Studies Review

"After several weeks reading every page, I came away from the task with admiration for Fee's depth of study and wideness of acquaintance with both primary texts and secondary sources reflected in this hefty volume. As such, the book will stand on the bookshelf as an invaluable resource and point of reference whenever a central theme of NT theology is discussed. It is Fee's magnum opus."--Ralph P. Martin, Interpretation

"This is an ambitious book and an important and useful one. It is valuable for the data it collects, the methodology it carefully explains and follows, the detail of its exegesis, and the forthrightness of its conclusions. . . . This book does sterling service for those wishing to investigate Paul's thinking on this most foundational area. We are indebted to Professor Fee for his patient and insightful work."--Bill Salier, Reformed Theological Review

"This magisterial work is the first full-scale, comprehensive study of Paul's Christology. Whereas other works on Paul discuss his Christology alongside a variety of other Pauline themes, Fee has made Paul's Christology the centre of his study. One of Fee's aims is to counter the tendency in New Testament scholarship to downplay Pauline Christology. The approach Fee has adopted to bring to the fore Paul's Christology is to provide a close reading of each of the Pauline letters--both authentic and disputed. The study of each letter is then organized according to the Christological themes that emerge from the exegesis of that letter. This approach has the advantage of allowing the Christological elements of the Pauline corpus to emerge from the texts themselves and also allows the reader to grasp the distinctiveness of each letter's portrayal of Christ. . . . [This] is an outstanding work of scholarship and is likely to become the definitive work on Pauline Christology for the foreseeable future."--David R. Law, Theological Book Review

"The strengths of Pauline Christology are numerous. . . . This is no cursory treatment of the subject matter. . . . All of the texts that should be examined are examined, and they are studied in a comprehensive fashion. . . . The text lends itself in style and format to use as a familiar reference tool. . . . The reader is able to lean heavily on Pauline Christology (with its copious footnotes and ample reference material) for ancillary studies. . . . The book should be purchased, read, dog-eared, and utilized by student and pastor alike."--David W. Bailey, Criswell Theological Review

"The book will be noteworthy as a counterpoint to the work of scholars such as James Dunn in arguing for the pre-existence of Christ and for a proto-Trinitarian christology, a term Fee avows is not original but borrowed from Stanley Porter. The book includes extensive use of Greek, but typically the quotations in the text are translated in a way which will enable those without Greek or those with limited Greek to appreciate the argument. The book will be suitable for more advanced students who are following an MDiv or first degree in Theology as well as those undertaking graduate-level courses in New Testament. It will be a valuable addition to libraries in institutions providing serious courses in biblical studies."--Geoffrey Chorley, Theological Book Review

"Fee is a master writer, exegete, and commentator--three ingredients of his scholarship that come to the fore in this book. . . . Readers who have some acquaintance with Greek language and grammar will best be able to follow Fee's arguments. Fee does, however, provide an English translation and grammatical structure, which parallels the Greek text being discussed. So general readers can excavate the essence of Fee's main points. . . . The major benefit for readers is the strong emphasis on the supremacy of Christ. Fee powerfully conveys Paul's Christocentric worldview."--Bibliotheca Sacra

"A range of commendable epithets can be used of this work. It is comprehensive in its treatment of Pauline Christology. Indeed, in some respects it is unique in this regard. It is exemplary both in its scholarly approach and it its recourse to other secondary literature. Perhaps even more impressive is its treatment of the primary sources. It is well written, nicely presented and, as one would expect of Fee, its indices and bibliography are carefully compiled in order to facilitate further research. For anyone involved in undergraduate Pauline studies in particular, this book is a 'must read.'"--Glenn M. Balfour, Journal for the Study of the New Testament Booklist