A Christian-Muslim Debate on the Resurrection 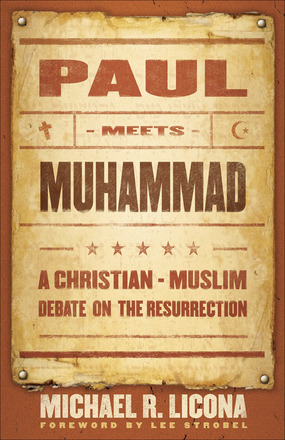 The resurrection of Jesus: fact or fiction?

Imagine a crowded arena full of Christians, Muslims, and curious onlookers packed in to hear the outcome of one of the greatest debates in all of history. If Jesus didn't rise from the dead, Christianity is false. But if Jesus was resurrected, Christianity is true and Islam is false. The stakes are high.

Paul Meets Muhammad imagines a futuristic face-off between two religious heavyweights, each speaking on the validity of their doctrines, forming arguments and rebuttals while citing evidence from the Qur'an and the Gospel accounts. Intriguing and entertaining, this page-turner uniquely offers a comprehensive defense of Jesus's resurrection and of Christianity itself.

"In a day of heightened awareness of Islam in the West, it is vitally important that Christians know how to give answer when asked by a Muslim for the hope that is in us. Since the Qur'an denies the historicity of the crucifixion, burial, and resurrection of Jesus, the evidence for these events constitutes justification for thinking that Christianity rather than Islam gives us the truth about Jesus and the God he revealed. In this book Licona not only marshals that evidence but also refutes the typical objections brought by Muslim apologists against it."--William Lane Craig, research professor of philosophy, Talbot School of Theology

"The Islam/Christian debate all comes down to whether Jesus rose from the dead shortly after his crucifixion. If he did not, then Christianity is a sham. In his book, Paul Meets Muhammad, Michael Licona entertains and educated the reader in an ingeniously crafted debate that is fair to both sides. If you are a Christian looking for a resource on how to share your faith with your Muslim friend, look no further."--D. James Kennedy, senior minister, Coral Ridge Presbyterian Church, Fort Lauderdale, Florida; chancellor, Knox Theological Seminary

"Reconstructing debates between the greats of the past is a clever device occasionally attempted in the media--printed or aired--but never with such success as in Paul Meets Muhammad. St. Paul debating Muhammad? Forget the time warp and simply enjoy the interchange! Since Michael Licona is fast becoming one of Christianity's most eloquent apologists for the Resurrection, you will assume a strong, pro-Christian bias in this book (St. Paul will have all the good lines and Muhammad the bad) but you will be wrong! Licona brilliantly presents also the Muslim arguments at the heart of the Christian-Muslim dialogue, claims that Jesus never died and so could not have been resurrected. Since the Muslim challenge to the church is becoming more acute each passing day, it is well for Christians to arm themselves with the arsenal of arguments presented in these pages."--Paul L. Maier, Ph.D., Litt.D., professor of history, Western Michigan University

"This brilliant idea for reconstructing a dialogue between Paul and Mohammad plainly indicates Mike Licona's mastery of the subject matter of Jesus's resurrection. Islam postulates an alternate theory that is supernatural in nature. This book successfully critiques this approach and needs to be read by any Christian desiring to have constructive dialogue with Muslims. Since Mike's presentation of the Muslim view is actually stronger than I have heard presented by Muslim scholars, Muslims should enjoy reading it, too!"--Gary Habermas, distinguished research professor, Liberty University

"Paul Meets Muhammad is appropriately titled. In this book Michael Licona makes plain the differences that exist between Christianity and Islam concerning the central truth of the Christian Faith: the historical, bodily resurrection of Jesus, the Son of God.
The debate format between the apostle Paul and the prophet Muhammad will draw one quickly into the discussion. Licona's treatment of the issue, fair and balanced, draws on primary sources which allows each side to speak for themselves. The importance of historically credible evidence, careful reasoning, and logical consistency are clearly demonstrated. Read this book and learn. Read this book and be challenged. Read this book and see evidence mount for the empty tomb and the supernatural resurrection of Jesus Christ."--Daniel L. Akin, president, Southeastern Baptist Theological Seminary

"In this book one finds creativity mixed with solid information, resulting in a very interesting reading experience. Its biggest contribution is its honest attempt to introduce readers to the Christan-Islam debate, one that will only become more and more important in our global village."--Jan ver der Watt, professor of New Testament studies, University of Pretoria

"An engaging and delightful debate between St. Paul and Muhammad! Mike Licona does a splendid job of laying out the key differences between Christianity and Islam, which center on the historicity and theological significance of Jesus' death and resurrection."--Paul Copan, Pledger Family Chair of Philosophy and Ethics, Palm Beach Atlantic University

"Michael Licona's Paul Meets Muhammad highlights the key points of disagreement between Christian and Islamic faith in a way that is easy to understand and fun to read. The imaginary debate between the Paul the apostle and Muhammad the prophet is fair and respectful and will help Muslims and Christians alike to understand better the importance and centrality of the resurrection of Jesus. Although advanced students of religion will find this book useful and stimulating, it will prove especially helpful to non-experts. I highly recommend it."--Craig A. Evans, Payzant Distinguished Professor, Acadia Divinity College, Nova Scotia, Canada

"In his new book, Paul Meet Muhammad, Michael R. Licona has, in one fell swoop, found the most unique manner of approaching Islamic evangelism that I have seen in quite some time. Licona is intelligent, on target, strong in conviction, and yet at the same time compassion and sensitivity flow through this work. I cannot give this work a higher endorsement. Buy it, use it. This book, this book can change lives."--Dr. Ergun Mehmet Caner, dean, Liberty Theological Seminary

"The debate between these two giants of history is carefully planned, thought out, and very real. The reader will join that captivated audience."--Donna Eggett, Christian Book Previews.com

"Intriguing and entertaining, this page-turner uniquely offers a comprehensive defense of Jesus' resurrection and of Christianity itself."--PRISM ePistle

"The author does a credible job of presenting strong arguments for both Christianity and Islam without deliberately sabotaging Islam. It also is important if you want to use this book as an effective instrument in the conversion of non believers. It will also assist those who have limited knowledge of the Qur'an's contents. I was one such person and I now feel better prepared in witnessing to Muslims."--PhantomTollbooth.com