Partakers of the Divine Nature

The History and Development of Deification in the Christian Traditions 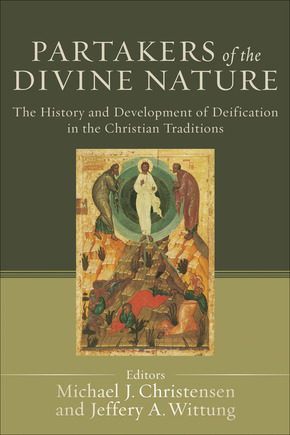 "A groundbreaking, panoramic collection of studies on the theme of deification/theosis. This finely conceived and well-crafted volume will help significantly to deepen the understanding and appreciation of salvation as deification for all who read it."--David C. Ford, St. Tikhon's Orthodox Theological Seminary

This critical volume focuses on the concept of deification in Christian intellectual history. It draws together Eastern Orthodox, Roman Catholic, and Protestant scholars to introduce and explain the theory of deification as a biblically rooted, central theme in the Christian doctrine of salvation in diverse eras and traditions. The book addresses the origin, development, and function of deification from its precursors in ancient Greek philosophy to its nuanced use in contemporary theological thought. The revival of interest in deification, which has often been seen as heresy in the Protestant West, heralds a return to foundational understandings of salvation in the Christian church before divisions of East and West, Catholic and Protestant. Originally published in hardcover, this book is now available in paperback to a wider readership.

"The contributors to this rich and varied volume have reached across the divides of time, place, and culture to explore the deepest hopes and wildest aspirations of Christians in their relationship with God. Historians, students, ecumenists, and the burgeoning company of enthusiasts for spirituality will all enjoy the abundant and provocative feast that is served up here."--Kathleen McVey, J. Ross Stevenson Professor of Early and Eastern Church History, Princeton Theological Seminary

"This groundbreaking, panoramic collection of studies on the theme of deification/theosis is most welcome. These essays clearly demonstrate that the grand and sublime calling of every human being to participate in the very life of God has always been central in Eastern Orthodox Christianity. They also convincingly reveal that this high calling was intuited by the ancient Greek philosophers, and has been present in varying forms in the thought of major figures in Western Christianity from Anselm to Karl Rahner. I believe this finely conceived and well-crafted volume will help significantly to deepen the understanding and appreciation of salvation as deification for all who read it."--David C. Ford, associate professor of church history, St. Tikhon's Orthodox Theological Seminary

"This is a timely book that offers a fuller scope and history of the theme of deification than is possible for a single author. This [can] be a basic textbook for general, wide-ranging courses on 'Deification in the Christian traditions.'"--John Behr, professor of patristics, St. Vladimir's Orthodox Theological Seminary

"This is a welcome contribution to ecumenical theology! Over the last twenty years the theme of deification has become one of the most significant and fruitful settings of Christian theological dialogue, standing at the nexus between Eastern and Western Christian traditions. There has been no lack of provocative proposals, or stern critiques. But we have lacked--until now--a broad and reliable collection that places the various specialized contributions in perspective and provides a sense of what is at stake. All who are interested in this important topic should begin here!"--Randy L. Maddox, professor of theology and Wesleyan studies, Duke University Divinity School

"One of the great values of this volume is that it expands the discussion of theosis, often confined largely to the Early Church Fathers and Orthodoxy, to include a repertory of outstanding thinkers, philosophers, theologians, and historians from the Orthodox, Roman Catholic, Copto-Arabic, and Protestant traditions from the early church to the present. Hence, it is a welcome and valuable contribution to the bibliography and analysis of the theme of theosis."--S T Kimbrough, United Methodist scholar

"These essays analyze the history of exegesis of major biblical passages that teach that the faithful are becoming 'partakers of the divine nature' (2 Peter 1:4), tracing the debate through its Pauline and Johannine analogues, and through patristic, medieval, Reformation, and modern Christian developments. Protestant historical theologians will find instructive the sections on Luther, Calvin, and Wesley, as compared with the Cappadocians, Ephrem, Maximus, and Anselm, as well as more recent writers such as Bulgakov and Karl Rahner. They establish the persistence and the renewal of interest in this theme in recent research."--Thomas C. Oden, general editor, Ancient Christian Commentary on Scripture

"An important volume that fills a definite gap in the literature and does so in an admirable ecumenical spirit. . . . There is much research in this well-produced book . . . and it will surely take its place as the volume that brings together in one place authoritative treatments of a previously somewhat neglected area."--Theological Book Review

"This rich and provocative volume brings together a wide range of contexts and perspectives--biblical, historical, theological, ecclesiastical, and confessional--so as to make possible a richer and deeper dialogue about the profound mystery of the relationship between the divine and the human and about the shape and meaning of salvation. . . . This is a valuable book if for no other reason than it has engaged serious scholars from Orthodox, Roman Catholic, and Protestant backgrounds in a serious conversation about the deepest beliefs and hopes that Christians have in their relationship to God. Their exploration ranges across more than fifteen hundred years of Christian life and includes insights from many different academic disciplines, cultures, historical contexts, and ecclesial traditions. This book contains much that will be of interest to scholars, ecumenists, pastors, and those concerned about issues of Christian spirituality. . . . [A] most significant ecumenical and scholarly undertaking."--V. Bruce Rigdon, Theology Today

"The editors of this volume should be commended for offering a notable contribution to ecumenical scholarship. This book departs refreshingly from the pseudoacademic contrivances that so often typify this genre of literature. . . . This book's nearly flawless composition may be due in large part to the skills of coeditor Jeffery A. Wittung. . . . The editors of this volume are to be commended for an insightful, well-organized, and well-crafted contribution to the history and development of theosis in Christian thought."--Mark D. Menacher, Logia

"With mounting academic and popular interest in the human potential for transformation and spiritual perfectibility, there has been no full study of theosis or deification across cultures and historical periods within the Christian traditions until now. . . . This multi-author work treats the various visions and trajectories of deification that have emerged over the span of a millennium in the various Christian traditions, resulting in a sweeping yet thorough and distinctive contribution to scholarly and informed lay discussion of theosis."--Ecumenism

"A clearly organized work. . . . The specialized focus of many of the essays and the extensive documentation of each essay make this useful for theologians and academicians. . . . Scholars will find the extensive bibliography of both secondary sources and primary sources on theosis helpful for their own research. . . . The individual essays are insightful and stimulating. . . . The editors and individual authors make a valuable contribution to the attainment of their goal of demonstrating the importance of spiritual transformation for Christianity today by increasing knowledge of the concept of theosis. An emphasis upon theosis as a call for spiritual transformation provides an important alternative to contemporary theological approaches that emphasize the distance between God and creation."--John Culp, Wesleyan Theological Journal

"A historical survey that presents the reader with a panorama of eighteen studies that explicitly and implicitly pose questions for scholarly discussion. . . . Readers will profit from a critical engagement with these authors. . . . This collection . . . sends us on our way into a vital and critical exchange at the ecumenical table and in the cultural dialogue."--Robert Kolb, Church History