Now I Am Known 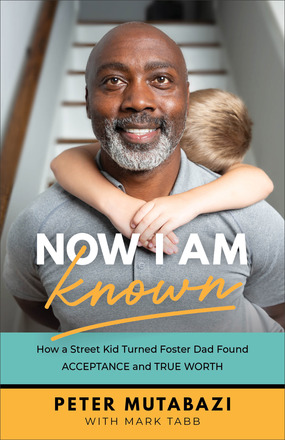 At age ten, Peter Mutabazi ran away from home. For five years he survived on the streets of Kampala, Uganda, a city of 1.5 million, until one man saw potential in him. This man not only supported Peter through school but also altered Peter's outlook in every possible way.

Since then, Peter has served as a relief coordinator during the Rwandan genocide, worked for the International Committee of the Red Cross during the Sudan conflict, emigrated to the United States, fostered countless children, and become a single adoptive parent. He speaks seven languages and has traveled to more than one hundred countries as an international advocate for vulnerable children.

Now I Am Known is Peter's inspiring true story. In it he reveals the transformational power of taking risks, learning to forgive, overcoming self-doubt, breaking negative patterns, and believing in a better future marked by hope and purpose.


"God met Peter Mutabazi in the midst of his agony, and he will meet you in yours too."--Kyle Idleman, bestselling author of Not a Fan and One at a Time

"Peter's astounding and unlikely true story proves that if you remain committed and give it your all, great things will happen."--Sanya Richards-Ross, Olympic gold medalist and founder of MommiNation

"A must-read for anyone wondering whether they can actually make a difference in this world."--Kelly Slater, American pro surfer and world champion

"One of the most redemptive stories you'll ever read."--Jedd Medefind, president of Christian Alliance for Orphans

"Our world sees pain and suffering as the worst possible circumstances. It is true that God did not intend pain and suffering for us, but he does choose to work through them. Our God met Peter Mutabazi in the midst of his agony, and he will meet you in yours too. In fact, he will be with you--in plenty and in want--no matter what your situation. Read Now I Am Known and be encouraged."

Kyle Idleman, bestselling author of Not a Fan and One at a Time

"Filled with detail and imagery from his years growing up in Africa to his adulthood in America, Peter's astounding and unlikely true story proves that if you remain committed and give it your all, great things will happen. Even though our stories are different, I can relate to Peter as a parent and as someone who has had to put in the work. Reaching goals, pursuing happiness, and achieving a dream are not done without sacrifices, dedication, focus, and faith."

"The pain of this tale runs deep, but its beauty and hope run even deeper. It is one of the most redemptive stories you'll ever read. Peter helps us feel the matchless ache of a child wounded by those who should have protected. Even more, he helps us to feel the matchless goodness present when a child grasps that they are valued and known through the tangible hospitality of a welcoming home."

"Peter's story takes us through pain and brutality, but it also shines with unexpected, life-changing hope. His touching journey will inspire and rekindle your own faith."

"Peter Mutabazi's Now I Am Known is one of the most powerful books I've read in a long time. With heart and vulnerability, Mutabazi shares the seemingly insurmountable challenges of his childhood and how the power of connection with one person who believed in him offered him a chance to reimagine his story. Now I Am Known offers a vivid and true picture of the grace of God and will challenge most Christians' understanding of compassion, risk, and second chances."

"Filled with stories of heartache and tenacity, Now I Am Known calls each of us out of apathy and into action. Beware: Peter's words will grab you and beg you to risk it all by choosing bravery and love, even and especially when it costs you."

Manda Carpenter, foster parent and author of Soul Care to Save Your Life

"I will never forget hearing Peter's story for the first time around a dimly lit dinner table in a restaurant outside of Nairobi, Kenya. I was captivated, in awe, and inspired by the resilience of this man and the kindness of others who had so beautifully interceded on his behalf. And now, some years later, this same man has opened his heart, his home, and his entire life to do for other kids the very thing that so many people had done for him. I'm still captivated, in awe, and inspired. Now I Am Known will no doubt leave you feeling the same."

"Peter's life is one of the most extraordinary examples of restoration and redemption coming out of dire beginnings. He has been the single most influential voice on my life to begin the fostering journey--and after these pages, you'll see why. Now I Am Known is a guttural, inspiring, honest, and no-fluff account of a heartbroken son growing into a powerful father. All because of choice and hope. A must-read for all those needing to find hope in their own chapters of life."

Carrie Lloyd, author of The Noble Renaissance and host of The Carrie On podcast

"Peter Mutabazi has endured it all. Name something terrible, crazy, and absolutely random, and this guy has probably lived through it. But he didn't let the pain of his circumstances end him. Now I Am Known is a story of hope that reminds us that whatever we might face today, it is not the end. Peter's is a modern-day Joseph story. We can begin over and over again--for ourselves, for our kids, and for our communities."

"An amazing story of perseverance, servanthood, and the love of people. The world would be changed forever with this model of love, service, and discipleship in the Lord's name."

"Now I Am Known shares the I-don't-want-to-believe-it's-true story of an abused and abandoned kid without help or hope in the gutters of Africa who becomes a force of change and influence in the lives of hundreds of thousands of children. I know Peter personally and could not recommend his book more highly. You'll be inspired, encouraged, challenged, and changed."

"Peter's story is a nightmare transformed into a dream come true. He is a true gift from God. His story is page turning, death defying, grace infused, and emotionally inspiring. This is truth stranger than fiction and a movie waiting to be made. But you will want to read his story first--it's that good. And he is as genuine in real life as he seems in the book. I count it an honor to be his friend. He is the real deal."

"Peter is a classic example of God at work. Throughout Peter's life, he has had tribulations, but God was always present, showering him with hope. His book is a lesson on encouragement for all of us, and Peter articulates clearly that our circumstances do not define us. Instead, our faith in Jesus Christ is our salvation. Peter's compassion for those who are struggling and his willingness to bless them are striking. His incredible perseverance to become a father and break a generation of hardship and poverty is real and very touching."

Rodney A. McLauchlan, chairman of the board at Legacy Trust Company

"In a world filled with an abundance of words and little movement toward action, Peter Mutabazi's story stands out. This is a man whose life has been so changed by God's love, he is compelled to put that love into action. In the twenty years that I've known Peter, he has been an encouraging friend, a wise mentor, and a man of integrity. And though I've heard Peter talk about his life many times over the years, in reading Now I Am Known, I am filled with renewed gratitude for his friendship and renewed wonder that someone who has had so much taken from him still has so much to give. This book is not only an inspiring story of perseverance through immense sorrow and pain but also a miraculous example of overwhelming hope and joy."

"Peter's compelling life story is filled with many sorrows and heartaches, yet it is a reflection of God's amazing grace. Peter grew up in extreme poverty, and you can see God restoring his life in abundant ways and divinely orchestrating his plan to bring redemption to Peter's pain. After so many challenges in his young life, Peter easily could have chosen a path of bitterness and anger, but instead he decided to live out grace and forgiveness toward those who hurt him. Peter is a living example of God's great love, grace, and mercy to a broken world."

"I pray that Peter's story takes everyone who reads it to that breaking point where they experience the Holy Spirit changing their world."

"Peter is a living legend. For anyone needing reasons to believe that their future is never limited by their past, Now I Am Known will be absolutely life changing! Peter's story is shocking and miraculous, which makes this book the most encouraging book you have ever read. Buy it. Read it. And give it to everyone you love!"

"Peter is burdened for all children, and Now I Am Known tells the story behind his passion. As a fellow advocate for foster care and adoption, I can't say enough good things about the inspiration found in this book or the work Peter Mutabazi does every day. This book brought me to tears in the best kind of way."

"Abuse can create monsters. It can also create compassionate individuals with a strong sense of right and wrong. I'm deeply inspired by Peter's kindness despite the intense abuse he and his mother and siblings suffered. This book is a must-read for anyone wondering whether they can actually make a real difference in this world."

"Peter's story is such an amazing picture of the adopting heart of the Father and the way that he rescues us to be a part of the rescue mission. His story will break your heart and encourage you at the same time that God. I pray this book will open the eyes of the church to the opportunity we have in our own communities to change lives eternally through foster care and adoption."