Neither Complementarian nor Egalitarian

A Kingdom Corrective to the Evangelical Gender Debate 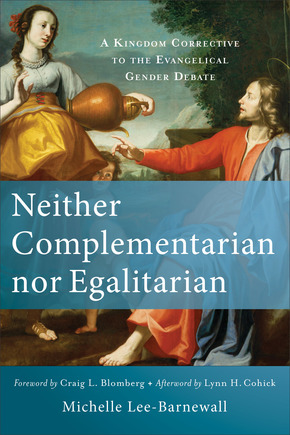 Regarding gender relations, the evangelical world is divided between complementarians and egalitarians. While both perspectives have much to contribute, the discussion has reached a stalemate. Michelle Lee-Barnewall critiques both sides of the debate, challenging the standard premises and arguments and offering new insight into a perennially divisive issue in the church. She brings fresh biblical exegesis to bear on our cultural situation, presenting an alternative way to move the discussion forward based on a corporate perspective and on kingdom values. The book includes a foreword by Craig L. Blomberg and an afterword by Lynn H. Cohick.

"Imagine using core biblical themes like corporateness, servant leadership, mutuality, and unity to discuss issues of the relationship of men and women to one another in the church. Imagine focusing not on power or rights but on the example of Christ. If you imagine reframing the gender discussion in helpful ways, then you will be interested in Neither Complementarian nor Egalitarian. When one serves while leading and pays special attention to corporate versus individual themes, things are transformed from the way the world (and sometimes the way the church on both sides of the debate) talks about them. Read this book no matter which side of the debate you are on--and think afresh."

"The church's debate over gender and leadership has become an intractable problem because we have adopted the model of the world, where leadership is about equality, rights, privilege, power, and position. Michelle Lee-Barnewall calls for a radical paradigm shift that adopts the upside-down values of the kingdom of God, where humility, love, service, unity, and responsibility replace power, privilege, and position as the guiding principles for true servant leadership. If put into practice, this book would transform not only the gender debate but also the prevailing model for all Christian leadership."

"This well-written book offers a gentle word of correction to sincere Christ followers who are honestly trying to search for biblical truth. It's a perspective-giving message that describes in biblical terms the only way to establish church unity, and it issues a quiet, radical call for pastors and church elders to imitate Christ and the apostles and recall the real cost of discipleship. I highly recommend it as a required textbook for seminary leadership courses."

Sarah Sumner, author of Men and Women in the Church: Building Consensus on Christian Leadership

"In a debate often polarized by shrill rhetoric, Lee-Barnewall rightly urges us instead to take each passage and argument on its own terms and to put kingdom principles first. Regardless of whether one agrees with every detail of Lee-Barnewall's reconstruction, her spirit and larger vision offer a constructive way forward, including a willingness to hear and learn from those with whom we may not agree on every point."

"Lee-Barnewall's analysis of the blind spots that arise in fixed arguments is indeed helpful, not only in the complementarian-egalitarian debate, but in any debate that has become over-brittle and calcified. . . . Lee-Barnewall's suggestions of unity and reversal as new conversational lenses offer a needed way forward. . . . I hope this book is read and discussed by anyone who wants to think biblically about gender roles, particularly by those of us well-versed in both sides of the evangelical dispute. It likely won't make many switch 'sides,' but that's not the point. Neither Complementarian nor Egalitarian, first and foremost, calls us out of our chosen foxholes into more nuance, thoughtfulness, and charity."

"Lee-Barnewell plows new ground by emphasizing the kingdom and counter-cultural values in biblical narratives about the relationship of men and women. Clearly, she doesn't resolve this debate, but that was never her intention. Her different perspective on various passages helps us see them in a fresh way, and that refocused vision is helpful."

"This book is highly recommended for those who desire to understand these issues. It engages the biblical text, the history of the church, and contemporary issues with sophistication and precision; it is an excellent model of evangelical Christian scholarship."

"For those who want to expand their thinking on gender roles in Christianity, Michelle Lee-Barnewall offers an interesting alternative. . . . It is impressive and encouraging that Michelle Lee-Barnewall has managed to present a discussion which is solidly scriptural but also, as she states, neither complementarian nor egalitarian. It is impressive for the discussion is so often emotionally charged, yet this book is written without criticism or vehemence. And it is encouraging to see a perspective that looks to Christ and his sovereignty rather than fighting to establish personal rights. . . . Without dismissing the need to continue the discussions around gender and authority in the church, Michelle Lee-Barnewall has contributed rich new material for discussion, making this book a valuable resource for anybody thinking about church structure, authority or gender roles in ministry."

"[Lee-Barnewall] bravely elevates the conversation to a new level of thinking by offering what she calls 'a kingdom corrective' as an alternative to the already established schools of thought. Not only is her corrective argument informative, but also unapologetic, respectful, and simultaneously free of pompous candor or dogmatic assertions. This book is a refreshing glass of water for the theologically parched, and a breath of fresh air for the either/or way of thinking that has brought hostile disunity to the church. . . . Lee-Barnewall's kingdom perspective provides the new framework to the gender debate by exploring different categories and asking different questions from the traditional framework. . . . This book is a gem that will undoubtedly promote healthy questions and kinder dialogue. It is a 'new contender' in the egalitarian/complementarian ring. . . . I believe wrestling with her arguments will be profitable to the gender debate, allowing the reader's self-awareness to usher in Christ-like humility before making any assumptions of other views."

Finding Rest in the Haven blog