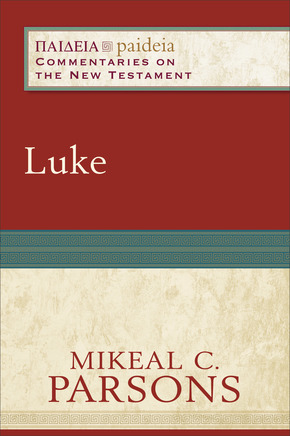 Mikeal Parsons, a leading scholar on Luke and Acts, offers a practical commentary on Luke that is conversant with contemporary scholarship, draws on ancient backgrounds, and attends to the theological nature of the texts. This commentary, like each in the Paideia series, proceeds by sense units rather than word-by-word or verse-by-verse. Students, pastors, and other readers will appreciate the historical, literary, and theological insight Parsons provides in interpreting the Gospel of Luke.

"With this outstanding new commentary on the Gospel of Luke by Mikeal C. Parsons, Paideia: Commentaries on the New Testament adds another stellar volume. This lucid, concise commentary displays the distinctive strengths that Parsons has brought to a distinguished career as scholar and author. With a keen eye for the literary artistry of Luke's narrative, impressive knowledge of Luke's cultural environment, and an ear carefully tuned to the rhetorical design and impact of this Gospel, Parsons provides a reliable guide for readers of Luke. On a variety of selected themes the commentary offers brief and provocative theological reflections that engage the religious imagination and allow the narrative's ethical vision to gain a fresh hearing by contemporary readers. I am pleased to give this book my enthusiastic endorsement."

"Since his groundbreaking Departure of Jesus in Luke-Acts in 1987, Mikeal Parsons has been a leading voice in Lukan studies, and this outstanding Paideia commentary marks his latest important contribution to the field. Rich with illustrations and informative sidebars, this text not only explores the first-century literary, rhetorical, historical, cultural, and theological contexts of the Lukan narrative but also carefully interprets the final form of Luke section by section and distills critical theological issues raised by the Lukan text. No one is better suited than Parsons for the task of creating such a multifaceted commentary on the Gospel of Luke, and he delivers an innovative and helpful work--brilliant yet succinct and accessible."

"Mikeal Parsons deftly navigates through Luke's Gospel, attending to its rhetoric, theology, historical context, and interpretive history. His rich engagement with the text itself makes this companion volume to his Acts Paideia commentary a welcome read."

"Contract a Greco-Roman historian, a literary critic, and a theologian--or commission Mikeal Parsons! Filled with rich interdisciplinary and intertextual insights, Luke in the Paideia Commentaries is vintage Parsons: tersely brilliant."

"Mikeal Parsons's Paidea commentary on Luke adds to the growing appreciation of the literary and rhetorical environment in which the Gospels were written. Parsons's close attention to the rhetoric of the narrative--his exposition of and at times delight in the various devices and figures that help to advance Luke's story of Jesus--will reward many readers. Rather than focusing on historical elements behind the Gospel story, Parsons allows us to see and at times hear the way the ancient audience might have heard this story of Jesus. Working with a rich understanding of ancient literature and rhetorical education, Parsons leads the modern interpreter to a richer appreciation for the context of this Gospel. He allows the various texts that would have been present for the ancient audience, including but not limited to other Gospels, to help inform a deeper understanding of Luke's rhetorical strategy. This will certainly be an important volume for readers of both Luke and the Gospels in general."

"The series foreword . . . states, 'This series is aimed squarely at students' from upper-level undergraduates to seminarians. Seldom has a book hit its target as well as this volume. A better first commentary will not be easy to identify. Those who employ Luke for professional purposes will also find it a useful addition to their library. . . . Parsons is in firm control of literary criticism and can deploy it so deftly that his readers may not know that their guide is an expert until they reach the end of their journey. . . . Parsons knows the rhetorical textbooks and cites them more than fifty times to illustrate Lucan techniques. . . . Format and layout are excellent. A concise introduction is followed by a section on 'narrative flow,' with fine sidebars that keep the context unrolling before the audience, paragraphs of detailed comment on units of varying size, and 'theological issues.'. . . These sections place the commentary in an explicitly Christian context. Their presence urges readers to think about application. . . . An exemplary text for a student series."

"Parsons here offers rich fare. His theological reflections may not always emerge from Luke's text; they are stimulating and focused. . . . Assuredly, his volume will remain a readable, insightful introduction to Luke as Christian writing. Readers are indebted to Mikeal Parsons."

"[Parsons] draws upon Lukan scholarship effectively and judiciously, providing the reader with adequate guidance to additional resources without overwhelming the reader's patience. In keeping with the goals of the series, the volume is particularly noteworthy for its attention to ancient texts, parallels, and cultural insights. The (black and white) pictures, insets, and textual enrichments are well conceived and professionally produced. These added materials significantly enhance the interpretive value of the volume for modern readers. . . . This commentary is highly recommended for students, scholars, and ministers."

"[Parsons] has written numerous books and articles on Luke and the Acts of the Apostles and brings that rich expertise to this commentary on the gospel. . . . Parsons writes clearly and incisively, laying out the structure, content, and, in a concluding section, the theological issues that emerge in each major segment of Luke's account. This is a very well-balanced and valuable resource for exploring Luke's gospel."

"Parsons provides seminarians and other theologically interested students of Luke's writings with an erudite grasp of Greco-Roman rhetorical techniques, biblical and intertestamental literature, as well as interpretive traditions from the ancient to late-modern periods. . . . All who read Parsons will benefit greatly."

"[Parsons] masterfully paints a portrait of Luke as literary artist. . . . Numerous figures, tables, maps, photographs, and structural outline graphics appear throughout the work helping to immerse the reader in the first-century Lukan Sitz im Leben, as well as to trace the rhetorical flow throughout Luke's Gospel. . . . There is much to commend in Parsons's work. . . . [It] is scholarly, yet accessible. . . . Many of Parsons's insights are fresh and make a novel contribution to Lukan studies. . . . Parsons's commentary enables its readers to focus on the text of Luke holistically--thus, noticing the connections between the macro and micro structures of the text. . . . Parsons's commentary evinces the erudition and fruit of a lifetime of scholarship devoted to the study of the literary artistry of Luke's Gospel. . . . This work hits the mark and deserves a spot on the shelf of any serious student of Luke's Gospel. . . . It is a valuable tool for anyone who is teaching/preaching through Luke's Gospel."