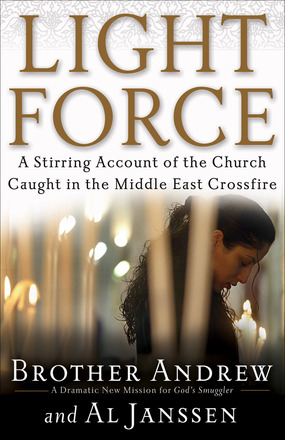 In the midst of never-ending debates, protests, riots, suicide bombings, and broken peace initiatives, one man came to make a difference. Previously known for his determination to deliver Bibles behind the Iron Curtain, Brother Andrew has spent the last thirty years on a very different quest. Traveling to Lebanon, the West Bank, Gaza, and Israel, Brother Andrew has sought out church leaders and urged them not to flee the violence but to stay and strengthen their congregations to become a force for change. His mission: to bring hope to the believers caught in the crossfire of the most volatile region on earth.

"Light Force is an engaging, informed, sensitive and (inevitably) controversial book. Brother Andrew and Al Janssen hold up a different lens by which we can view the deepest and oldest conflict on this planet. Rather than taking sides, the authors recognize the plight of Palestinian Christians, torn apart by a war they do not want, but cannot escape. With eye-opening and heart-stirring stories that offer glimpses beneath the boiling surface of conflict, Light Force offers the only source of hope and reconciliation for Jews and Arabs within Israeli borders: Jesus Christ. This is a book which invites applause and criticism. It will edify and offend, fostering healthy and much-needed discussion and debate in the western church. I have worshipped in several messianic congregations with Jewish Christians in Israel, and fellowshipped with Palestinian Christians in Bethlehem and Gaza. My heart breaks for the anguish experienced by both. I pray that together these disciples of Jesus would link arms, displaying to the watching world the miracle of reconciliation that exceeds all human hope and explanation. The friendship of the children depicted on the cover of this book requires a miracle...and Jesus specializes in working miracles."--Randy Alcorn, author, Safely Home and The Grace and Truth Paradox

"This man's courage is not just a case of bravado on steroids."--Charisma

"Historical in its telling and inspirational in its reading."--Charisma

"Light Force is very enlightening and thought-provoking; the first-person voice adds a sense of humanity to history--a feeling of holiness to headlines."--CCM Magazine

"This book is an evangelistic adventure."--Advance

"Light Force (def.): those engaged in actively bringing God's light to those who need it, no matter who they are. An excellent, gripping, challenging book, Light Force will engender argument, questions, and a deep look at your own spiritual life. At 76 years old, Brother Andrew describes his journey to minister to the persecuted church in that region, and in the process reveals his passion for all who are lost."--Donna Eggett, Christian Book Previews.com