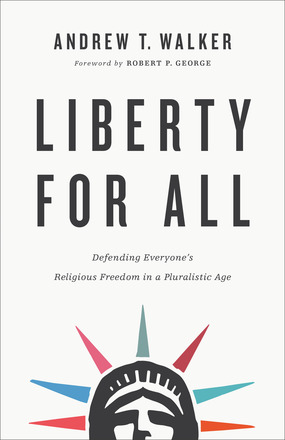 Christians are often thought of as defending only their own religious interests in the public square. They are viewed as worrying exclusively about the erosion of their freedom to assemble and to follow their convictions, while not seeming as concerned about publicly defending the rights of Muslims, Hindus, Jews, and atheists to do the same.

"Liberty for All delivers a robust treatment of the concept of religious liberty, a notion not merely political, merely modern, or merely American, but one, as Andrew Walker expertly shows, that gets at the heart of what it means to bear God's image, to exercise moral agency, and to live with love toward all neighbors."

Karen Swallow Prior, author of On Reading Well: Finding the Good Life through Great Books

"In a time when the term 'religious liberty' has become a byword for bigotry among some, Andrew Walker pushes back against this narrow-minded prejudice and argues for why honoring and defending freedom of religious conscience is essential to the public good. By defending the right to be wrong about God, both believers and nonbelievers stand up for what it means to be fully human. And, as Walker contends, Christians become more fully who Christ calls us to be. This book appears as a lighthouse in a gathering storm."

Rod Dreher, author of The Benedict Option: A Strategy for Christians in a Post-Christian Nation

"Walker synthesizes religious liberty, which is commonly regarded as a social rather than religious value, with the major doctrines of the Christian faith and the metanarrative of Scripture itself. Freedom of worship is indeed an inalienable right, not because of the substance of one's religious beliefs but because of the substance of one's status as God's image bearer. As hostility toward the Christian faith increases, few ideas are worth contending for with such urgency as the claim that liberty is indeed for everyone."

"We live in turbulent times, as traditional freedoms such as those of speech and religion move from being commonly regarded as social virtues to being seen as political problems. And that raises hard questions for Christians--especially in the United States, where Christianity is declining so rapidly that many still cling to the older sense of 'Christian America' entitlement even as that becomes practically implausible. In such a time we need clear thinkers and good guides. Andrew Walker is one such. He makes a profound and compelling case that religious freedom is important so that we might all--Christian and non-Christian alike--seek the good of the earthly city while never allowing it to eclipse, relativize, or become confused with the heavenly city. For a generation raised on the angry sound bites of Twitter and carefully curated news programs, this book will be challenging but, when read carefully and thoughtfully, transformative."

Carl R. Trueman, Grove City College; author of The Rise and Triumph of the Modern Self

"Andrew Walker provides a compelling account of Christian secularism and the case for religious liberty for all as part of Christian mission. He explains how religious liberty makes sense as an authentic expression of a Christian worldview and is indelibly tied to the biblical story. Walker has established himself as one of the preeminent Baptist public theologians of our time."

"Andrew T. Walker's splendid book rescues the idea of religious liberty from the culture wars and locates its true home in a place that will take many readers by surprise: the theology of Christianity itself. Elegant and eye-opening, Liberty for All is essential reading for Americans seeking to understand the deepest cultural currents of our time--including those of different creeds, and those with no creed at all."

Mary Eberstadt, author of Primal Screams: How the Sexual Revolution Created Identity Politics and How the West Really Lost God

"Religious liberty is not, first and foremost, a constitutional right. The great contribution of Walker's excellent book is to remind us that religious liberty is a doctrine grounded in the Bible--in eschatology, anthropology, and missiology. That means religious liberty's defense by Christians is an act of biblical obedience, and its observance by governments is a fundamental act of justice, a timely reminder when unconstrained visions of political life abound on all sides of the political spectrum. I do not know of a better explanation and defense of the doctrine of religious liberty. Walker's book deserves a wide hearing and a long life."

"Religious liberty has become surprisingly controversial of late. Andrew Walker's excellent book offers Christians a strong, incisive set of theological and scriptural arguments in favor of a robust religious liberty. We would do well to heed his arguments and, even better, put them into practice."

"Is religious freedom a mere spin-off from a secularist demand that church and state be separated, so as to free people's minds from oppressive religions? Or is freedom of religion a form of special pleading by religious people who cannot defend their beliefs in rational discourse but seek some special advantage or influence? Is it perhaps a surrender to a secular age that Christians ought not to make, if they have the wherewithal to make a confessional state? Or is religious liberty, in less sinister terms, just one of the articles of peace in a pluralistic society, with only a pragmatic ground to stand on? The true answer, as Walker demonstrates in Liberty for All, is none of the above. Walker shows that the strongest case for religious freedom--including a freedom from confessional political orders--is the Christian case. In the mode of an apologetic, he demonstrates that a commitment to everyone's religious freedom is inseparable from the Great Commission itself. In Walker's account, the public square is richly garbed in the free discourse of all faiths, not stripped bare for the sake of a desiccated secularism, and the kingdom of God is advanced in a civic friendship of Christians with fellow citizens. Religious liberty, he shows us, is the essential predicate of our reasoning together about ultimate things in our penultimate time together here."

"In this welcome and timely resource, Walker has brilliantly articulated a thoroughgoing treatment of religious liberty for our secular and pluralistic context. Shaped by a robust theological and ethical framework, Liberty for All offers eschatological, anthropological, and missiological perspectives to enable Christians to navigate deep personal and religious differences while encouraging civility and commonality in our participation in the public square. Seeking to retrieve a tradition for the common good while offering his own understanding of Baptist distinctives related to this important subject, Walker makes a convincing case for religious liberty for everyone. The foreword from Robert P. George is icing on the cake. One of the most important books on this subject in recent years, Liberty for All is a must-read, and I heartily recommend it."

"Walker has successfully demonstrated that religious liberty, vindicated by history as good public policy, is also demonstrated by Scripture to be good Christian theology. Liberty for All aids a new generation in recognizing that religious liberty enthrones Christ as King, respects people as his subjects, and promotes the Christian gospel. This book will quickly find a place on the shelves in seminary libraries. May God also bring it to church libraries and home libraries."

"Christian public witness--and human flourishing in general--is inseparable from a full-orbed understanding of religious liberty. In this important book, Andrew Walker rightly underscores how high the stakes truly are. As he points out, religious liberty hinges on some of the deepest questions of ethics and worship. Liberty for All will be essential reading for any thoughtful Christian eager to faithfully navigate a pluralistic and increasingly secular public square."

"An especially timely publication in view of the recent and current political hostilities and divisions in our country today that seemingly fuel religious hypocrisy on the part of some in the Evangelical Christian community, Liberty for All: Defending Everyone's Religious Freedom in a Pluralistic Age is an articulate, erudite, and informative study that is especially and unreservedly recommended for community, seminary, church, college, and university library Church & State Religious Studies collections and supplemental curriculum lists."