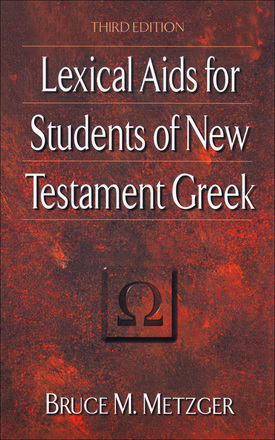 "An indispensable aid for beginning Greek students, strongly recommended as a supplement to a standard Greek grammar for any introductory-level seminary course in Biblical Greek."--David A. deSilva, Ashland Theological Journal

The beginning Greek student soon faces a vexing dilemma: a myriad of vocabulary words to learn and little time to learn them. One of the century's leading Greek scholars offers a solid solution by organizing Greek words according to their frequency of appearance in the New Testament. Lexical Aids for Students of New Testament Greek helps students maximize their study by concentrating on the words that appear most often in the Greek New Testament.

This venerable resource, which has served beginning language students for over fifty years, is divided into two parts. Part one lists New Testament words according to their frequency of occurrence. The usefulness of such lists is obvious, writes Metzger. By consulting them the beginner will not, so to speak, waste his time memorizing words that occur only rarely in the New Testament. He can be assured that when he has learned, say, the first 513 words in the lists he then knows all of the words (other than proper names) that occur at least 25 times in the New Testament.

The second part of Lexical Aids for Students of New Testament Greek features another helpful list, grouping Greek words according to their root. Also included are appendixes that provide tools for learning Greek prepositions and the principal parts of verbs.

" . . . An approach to the vocabulary of the New Testament that immediately commends itself to the student. . . Baker Book House is to be commended for making Metzger's Lexical Aids available to another generation of Greek students. . . . should be welcomed by all - students and teachers alike - who recognise the imortance of having a sound working knowledge of the language in which the New Testament was originally written. A mastery of the material in this slender volume will enable anyone who has already worked through a basic Greek grammar to read the new Testament with far greater fluency."--Vox Reformata

"An indispensable aid for beginning Greek students, strongly recommended as a supplement to a standard Greek grammar for any introductory-level seminary course in Biblical Greek."--David A. de Silva, Ashland Theological Journal