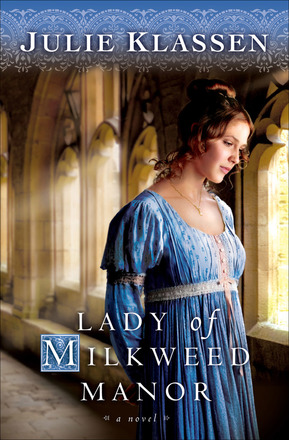 As Charlotte drew closer to the looming grey edifice that was to become her temporary home, she could not help but notice the secretive shuttered windows. Then she noticed the milkweeds...

Even a proper vicar's daughter can make a mistake--and now Charlotte Lamb must pay a high price for her fall. To avoid the prying eyes of all who know her, she hides herself away in London's forbidding "Milkweed Manor," a place of mystery and lore, of old secrets and new birth.

But once there, she comes face to face with a suitor from her past--a man who now hides secrets of his own. Both are determined, with God's help, to protect those they love. But neither can imagine the depth of sacrifice that will be required.

Sprinkled with fascinating details about the lives of women in Regency England, Lady of Milkweed Manor is a moving romantic drama about the redemption of past failings and the beauty of sacrificial love.

"Klassen's first novel succeeds in a multitude of ways. Set amid the smells and conventions of Regency England, the story is historical rich and fresh. The reader will immediately connect with Charlotte and her sense of loss on several levels. Her modesty is refreshing, her servant's heart and willingness to sacrifice all for the sake of her son thoroughly admirable. Daniel is a strong yet imperfect man, with high ideals and a true vocation for healing. The romantic portion of the storyline has several plausible options, and the conclusion immensely satisfying. Yet the overall focus of working out one's faith in the midst of life's mistakes and challenges remains center-stage, and the result is a unique tale that deserves a wide readership."

"Klassen has written an amazing historical novel. Her style may remind readers of Jane Austen and Lawana Blackwell, and she handles a 19th-century taboo with grace, style and respect."

"In this inspirational historical romance debut novel set in 19th-century England, a young pregnant woman is forced to make difficult choices. Twenty-year-old Charlotte Lamb is the daughter of a heartless English vicar, as we discover when she becomes pregnant and he throws her out of her childhood home. Vulnerable and unprotected, she is forced to a lodging place for unwed mothers. Soon, Lamb must make decisions involving true love and sacrifice, providing many powerful turning points throughout the story. Although Klassen occasionally lapses into back-to-back dialogue, her prose is generally smooth, and Charlotte has the reader's sympathy from the earliest pages. The amount of information about wet nurses, lactation and breastfeeding can become weighty, although often intriguing (such as the practice of using goats to directly feed foundling infants to avoid the spread of syphilis). Faith themes are subtly woven throughout. The reader will need to suspend disbelief to enjoy some of the plot twists, especially the happily-ever-after ending, which provides the redemptive conclusion common to Christian fiction. A bonus is the milkweed poetry, lore and symbolism knitted into the narrative. Both readers of faith fiction and general readers of historical romance should enjoy this lovely offering from Klassen."