Kicking at the Darkness

Bruce Cockburn and the Christian Imagination 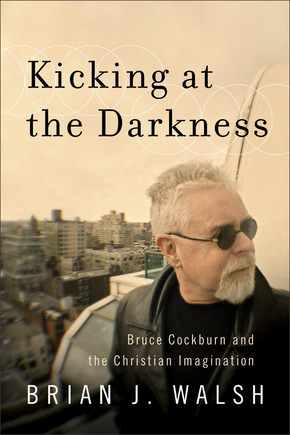 For forty years, singer and songwriter Bruce Cockburn has been writing beautifully evocative music. Bestselling author and respected theologian Brian Walsh has followed Cockburn's work for years and has written and spoken often on his art. In this creative theological and cultural engagement, Walsh reveals the imaginative depth and uncompromising honesty of the artist's Christian spirituality. Cockburn offers hope in the midst of doubt, struggle, failure, and anger; indeed, the sentiment of "kicking at the darkness" is at the heart of his spirituality. This book engages the rich imagery of Cockburn's lyrics as a catalyst for shaping and igniting a renewed Christian imagination.
Contents
1. God, Friendship, and Art
2. Ecstatic Wonderings and Dangerous Kicking: Imagination and Method
3. Cockburn's Windows: Getting a Big Picture
4. Creation Dream
5. At Home in the Darkness, but Hungry for Dawn
6. Creation Dreams and Ecological Nightmares
7. Into a World of Darkness
8. Humans
9. Broken Wheel
10. Betrayal and Shame
11. What Do You Do with the Darkness?
12. Justice and Jesus
13. Waiting for a Miracle
Discography

"Brian Walsh has offered us an enthusiastic celebration of Bruce Cockburn as a postmodern psalmist. Walsh engages in sustained reflection on Cockburn's sometimes dark and obscure lyrics and shows how they reflect a deep Christian sensibility that cherishes creation, groans along with the pain of a corrupted world, and yearns for the final revelation of beauty and justice. Longtime fans of Cockburn like me will find fresh shafts of light falling on familiar words; those who haven't yet discovered Cockburn will find themselves beckoned to encounter a world-changing artistic vision."

"Kicking at the Darkness is a brilliant analysis of forty years of Bruce Cockburn's lyrics and their biblical and religious connections. Brian Walsh's explication is thoroughly researched and logical, and also compelling and entertaining. I read it from start to finish in one evening."

"Brian Walsh is not just a theologian; he's a poet and a farmer, a father and a husband. He's an intellectual who likes good music; he's a lover of culture and a critic of culture. In this book, Walsh examines a musical legend and shows us how Bruce Cockburn's work can point us to God and to God's redemptive action in the world. Kick back, listen to some good music, and let this book help you re-imagine the world."

"What happens when one of the planet's leading Christian thinkers and writers engages with one of the planet's most brilliant songwriters and musicians? You'll find out when you read Kicking at the Darkness, Brian Walsh's new book about the music of Bruce Cockburn. I'm a dedicated fan of both of these men and I savored each page of this tremendous book."

Brian McLaren, author of A New Kind of Christianity and Naked Spirituality

"I've been listening to Cockburn for three decades and reading Walsh almost that long, and I can hardly imagine surviving these times, let alone believing that joy will find a way, without the artistry and insight of both. This is an extraordinarily ambitious project, years in the making, and there is profound insight on every page. Whether you are a seasoned Cockburn fan or not, this is a rewarding, provocative experiment in criticism. I recommend it with great enthusiasm and with immense gratitude."

"Kicking at the Darkness is not just for the Bruce Cockburn fan club, but for anyone who longs to explore the implications of an imaginative Christian vision for the world--a vision that is heartbreakingly honest about brokenness and radically hopeful about the Creator's sustaining promises. Walsh artfully and expertly toys with the many lyrical themes in Cockburn's body of work, while maintaining an essential posture of humility and respect. Walsh might just be the single best scholar to engage this prolific artist's work, bringing the reader over and over again to a sense of having communed with the Divine in the midst of the empire's insanity."

"YOU need to read this book! Bruce Cockburn is a shrewdly observant prophet and a graciously compassionate psalmist, 'a troubadour on the way home,' Brian Walsh calls him. Walsh, who has studied Cockburn's music for forty years, here sings out his theological insights and political perceptions as a cantata that seeks to engender in us an alternative imagination. May Cockburn's clear melodies of truth in this carefully nuanced book pique new imaginations for Christians and others throughout the world."

Marva Dawn, theologian, teacher, and author of Unfettered Hope: A Call to Faithful Living in an Affluent Society

"Brian Walsh has invited Bruce Cockburn--and us the readers--into a thoughtful and profound theological engagement about the meaning of life and art, through a conversation with the lyrics of Cockburn's songs. Along the way Walsh quotes C. S. Lewis's comment that 'what you see and hear depends a good deal on where you are standing: it also depends on what sort of person you are.' This book both illuminates the depth of Cockburn's spirituality and gives us a glimpse of where Brian Walsh stands and what sort of person he is. For those who know and love Bruce Cockburn's music, this is a rich feast provided by a master teacher; for those who are new to Cockburn, this could be just the invitation to get them hooked."

"At last, a robust engagement with Bruce Cockburn's art that brings Canada's prized poet-musician into sustained and creative dialogue with biblical faith. Brian J. Walsh writes with obvious affection for his subject but also considerable lucidity as he ranges far and wide across the Cockburn canon. Good things happen when erudite theological reflection takes popular culture seriously. This book is a case in point."

"For more than 40 years and in 31 albums (20 of which went gold or platinum), the Canadian guitarist and singer-songwriter [Bruce Cockburn] has probed the depths of human life in all its joy, anguish, sorrow, despair, and hope. In this affectionate set of fanf's notes on his favorite musician, Walsh . . . gracefully and charmingly attempts to join Cockburn on his artistic journey to determine whether there are resonances with our own journeys and to see if Cockburn offers wisdom that will help us as we travel our own roads. . . . Walsh's loving tribute to Cockburn's artistry, one suffused with grace and generosity, offers a rich introduction to one of our most precious musical talents."

"Kicking at the Darkness exemplifies the 'deep listening' and 'deep receptivity' that Walsh attributes to Cockburn. It offers a powerfully articulate and thorough account of Cockburn's theological vision. In the process, Walsh makes movingly explicit his debts to the singer's albums and performances with regard to his own living, thinking, and writing. . . . Walsh renders a deep and enlivening service by placing Cockburn in the company of the prophets. . . . The care and wit with which Walsh interprets songs is a profound grace to Cockburn and his listeners. The book describes only the tip of the iceberg in terms of Cockburn's output. As an introduction to him, it is indispensable."

"Kicking at the Darkness is really a conversation, an intensely engaged discussion about the meaning of life, with three participants: Bruce Cockburn, as he has spoken through his songs; Brian Walsh, as he assesses his own life and its meaning; and the reader, brought face-to-face with self and world. . . . This is a very good book for someone who wants to encounter God in the midst of messy life in a complicated world. . . . Walsh draws out major themes and motifs in Cockburn's work that call for reflection. . . . . Walsh's most significant contribution, though, may be his account of Cockburn's 'worldview.'. . . I strongly recommend at least some listening [of Cockburn's music] beforehand--or, perhaps, at intervals as meditative moments, while reading Kicking. Handled in that way, the book could be very useful for private spiritual development or as a theme book for a retreat or small-group study."

"A theological treatise on Bruce Cockburn has been very necessary for years. . . . That [Brian Walsh] was perfect for this particularly important and skillful task has been obvious for some 20 years. . . . Walsh actually causes you to realize the width and depth and breadth of Cockburn's theological comment. . . . The author's approach is actually very simple and he uses this welcoming foundation to weave his immense insight into Cockburn's songs to finish with much more than a commentary on Cockburn but rather a Christian worldview. He asks questions. . . . From these questions Walsh dialogues with endless lyrics of Cockburn's to arrive at his answers in very articulate, Christian ways. . . . At times it seems that Walsh has become the thread that weaves Cockburn's words together. Kicking at the Darkness is an astounding work on an astounding musical catalog. . . . [It] gave me a refresher course in my Christian worldview. It led me into theological thinking and inspired me to imagine the way the world is--and how the world can be--and how, as a preacher, I can at least attempt to share those thoughts in ways that are perhaps a percentage as creative and imaginative as Bruce Cockburn."

"Fans of Bruce Cockburn and those who want to think seriously about popular music will be interested in Kicking at the Darkness, a book in which Brian Walsh walks us through Cockburn's music with loving attention to detail. . . . You might not always agree with Walsh at each point, but you'll find his musings both meditative and thoughtful, one model for responding Christianly to the music that resonates so deeply in the hearts of so many."

"Brian Walsh has previously written a number of articles exploring Cockburn's lyrics and highlighting their rich theological resonance. I am delighted that he has found the time and opportunity to pull together his theological reflections in dialogue with Cockburn's lyrics. . . . Walsh . . . frame[s] a rich, complex and imaginative unpacking of Cockburn's lyrics in the task of refreshing our imaginative understanding of Christian discipleship. There is nothing of a formulaic character to the analysis and Walsh resists the temptation to force Cockburn's lyrics into a pat justification for sundry Christian doctrines. . . . If you want an introduction to the Christian way that touches the heart and the imagination, as well as the mind, this book is for you. If you are not familiar with Cockburn's work get hold of some and listen to the songs as you read. . . . Read Walsh, listen to Cockburn and be refreshed and encouraged in your journey of discipleship."

"One of the things about Brian's several important books that means the world to me is how he uses lines from Bruce Cockburn to illustrate his points, how he ruminates on Cockburn's allusive rock poetry and sees his songs as a part of his own passionate and prophetic writing. . . . An amazingly rich and thoughtful book. . . . This is certainly, without a doubt, one of my own personal favorite books. Ever."

"Walsh dives deep into nearly 150 of Cockburn's songs, unpacking their insights on faith, life, love, and politics. . . . Walsh, author of acclaimed books on developing a Christian worldview, writes as critic and fan, examining Cockburn's musicianship (which blends folk, rock, jazz, and world music styles) and lyrics (which vary from inspiring to challenging, and include theology and biblical imagery). . . . The book helped me understand Cockburn better after following his career closely for decades. If you don't know Cockburn's music, you're missing out on something special. . . . Read this book while listening so you can plumb the depths of this artist's powerful poetry."

"[This book] gives Cockburn devotees a chance to eavesdrop on a solid and creative theological thinker as he does the very thing we love to do. . . . What it delivers is an invitation to those who care about Cockburn's project to enter a dialogue, and to keep reflecting on what this artist's work has meant for us."