Joyful Witness in the Muslim World

Sharing the Gospel in Everyday Encounters 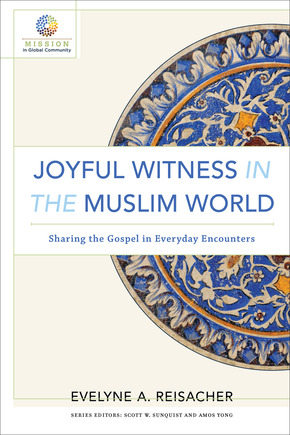 Joyful Witness in the Muslim World features global perspectives on current Christian engagement with Islam. It equips readers for mission among Muslims, exploring how to move from fear to joy in sharing the gospel.

After emphasizing the importance of joy in the biblical narrative on mission and in human relationship building, Evelyne Reisacher surveys areas where Muslims and Christians encounter one another in the twenty-first century, highlighting innovative models of Christian witness in everyday life. Drawing on insights from global Christianity, this survey takes account of diverse conceptions of Muslim-Christian relations. It may surprise those who believe mission among Muslims is nearly impossible.

Reisacher, who has decades of experience in engagement with Muslims, has noticed a certain dehumanization of Muslims by Christians. Muslims are seen as targets of mission instead of being accepted as human beings with whom we interact in everyday life. Walls have been erected between Muslims and Christians by social and political conflicts, and theological debates give the impression that Christians always meet with Muslims in extraordinary contexts. However, in today's global village, Muslims and Christians are likely to meet each other anywhere and everywhere. Reisacher demonstrates that suffering and joy in mission are not in contradiction. Joy can be a catalyst to relationship and witness in a world threatened by conflicts involving Christians and Muslims.

This volume will help enhance global and local mission among Muslims. It will be of use to professors and students in mission courses, to mission training institutions and organizations, and to mission-minded pastors and mission committees in local churches.

About the Series
This is the first book in the Mission in Global Community series, which reframes missiological themes and studies for students around the common theme of mission as partnership with others. Series authors draw upon their own global experiences and those of their global colleagues to illumine present realities and chart a course into the future. Series editors are Scott W. Sunquist, president of Gordon-Conwell Theological Seminary and former dean of the School of Intercultural Studies at Fuller Theological Seminary, and Amos Yong, director of the Center for Missiological Research and professor of theology and mission at Fuller Theological Seminary.

"This book is a joyous surprise! In an era when Islamophobia characterizes so much of Muslim-Christian relations, Evelyne Reisacher describes with gentle passion her joy-touched journey among Muslims. For all who seek to know Muslims, I enthusiastically commend this book. Evelyne anchors her theology of Joyful Witness in the Muslim World in the Trinity, wherein God is joyously celebrating the generous hospitality of his people and of all creation. For Evelyne 'witness' is welcoming all who will come to the bountiful table God as Father, Son, and Holy Spirit provides. This book is intended to facilitate worldwide conversations. All who yearn to celebrate the joy of surprisingly open doors for witness among Muslims will want to read this book!"

"Evelyne Reisacher writes as a scholar-practitioner whose passion is to reach Muslims with the gospel. She thoroughly examines the important venues that the church has readily available to share the gospel with Muslims next door and around the world. What is most compelling is the theological, psychological, and sociological foundation she discusses in the chapter, 'Toward Joyful Witness.' After reading this book, I was filled with joy and anticipation to continue to share the good news with Muslims with whom I am in regular contact. I gladly recommend this book for people in the church desiring to witness to Muslims and those in university and seminary classrooms preparing themselves for missional engagement."

"Missions work among Muslims represents the greatest challenge of evangelical missions. With that in mind, missiologists and missions practitioners owe a debt of gratitude to Evelyne Reisacher for Joyful Witness in the Muslim World, which presents fresh ways to engage and evangelize Muslims. Reisacher reminds us that 'ordinary' Muslims do not necessarily reflect what is written in books on world religions and that befriending and loving Muslims is the most fruitful practice. I highly recommend this book to those who are searching for new ways to bring Muslims to Christ."

"Perhaps understandably, much of our attention to the Muslim world--on the news, and in the church--revolves around war, terrorism, and other pervasive challenges. But Reisacher shows us the story we're missing. From a lifetime of missionary service, she reflects on how God's image is beautifully reflected in the Muslim men and women she's befriended. And she calls us to share our faith not out of fear or anger, but out of joy rooted in the hope of Christ."

"In the missiological literature, Christian testimony in the Muslim world has often been portrayed in serious and even tragic terms. Exploring the Christian tradition, starting with the way Jesus served people, Reisacher stresses that joyful testimony characterized his ministry, a fact often forgotten by Christians. . . . Reisacher presents the reader with a perspective on the world in which the encounter of Christians with Muslims may overflow into collaborative work celebrating the beauty of the arts, overcoming the environmental crisis, and helping those in trouble."

"It's very encouraging to read a book that expounds, in diverse and creative ways, how we as Christians can experience joy, share joy, and pass on joy as we befriend Muslims in our workplaces, communities, neighborhoods, and travels. Writing out of a lifetime of living and ministering among Muslims in France, and more recently, through teaching at Fuller Theological Seminary, Evelyne is able to illustrate her discussion with personal joy-giving encounters with Muslims in many countries around the world. . . . [This book] contributes a unique and much-needed new perspective to our ongoing conversations about Christian witness among Muslims. . . . Four types of Christians would especially benefit from reading this book: (1) ordinary Christians who have Muslim neighbors, (2) those studying Islam and ministry to Muslims, (3) pastors, Christian educators, and leaders, and (4) missionaries living among Muslims. The last group, I believe, will be especially challenged to greater creativity and boldness in their encounters with Muslims through reading this compelling call to joyful witness."

"[Reisacher's] aim, though hard to define, is noble: Let's live shoulder to shoulder with Muslims and watch what God does. . . . [She] relates examples of making 'beginner's errors' in her relationships with Muslims, and how she matured into new perspectives. She has spent time and diligent study among Muslims for 40 years. For those seeking to live and work among Muslims, her work is instructional. And it conveys an important point: we must grow from convert-makers into disciple-makers. Christians who connect with Muslims on a personal level will relax, feel less pressured to force unnatural conversations, truly understand their new Muslim friends, and be a more effective incarnation of Christ. If you take up Reisacher's work, I encourage you to read in that light--not discouraged by immaturity, but rather challenged to press on to maturity. . . . Joyful Witness in the Muslim World is a needed contribution to the conversation about the church's engagement with Muslims."

"The author has much experience to draw from and argues that Christians need to find ordinary, everyday joyful encounters with Muslims through which to witness to the joy they have found in Jesus Christ. . . . This book is an accessible read for most Christians, well worth the short time it will take to read the 189 pages. It will bring a level of confidence to those of us who are reticent to form friendships with Muslim neighbors. . . . The book is littered with references to many influential Christian and Islamic scholars and theologians, and the comprehensive bibliography and footnotes will allow the reader to engage further with issues raised and dig deeper should they choose to do so. . . . I commend this book."

"Reisacher provides a refreshing and motivating perspective on Christian-Muslim relations. She ties the oft-neglected missiology of joy to ordinary encounters with Muslims in order to help Christians bear witness for Christ. Reisacher also integrates human attachment theory with mission and the joyful aspect of personal relations, showing how this research can potentially open up new ways for witnessing in the Muslim world. . . . Reisacher's hope is that readers will be enthused to discover and explore further contexts for joyful witness; her positive and creative example indeed has this effect. . . . Reisacher writes with both novices and experts in mind, assuming no prior knowledge of Islam whilst also drawing from and building upon the work of other scholars across a broad theological spectrum. . . . The book feels both academic and personal, as Reisacher applies theory, theology and her own experiences at a practical, 'grassroots' level. I recommend the work for any Christian, particularly women, involved in witness amongst Muslims."