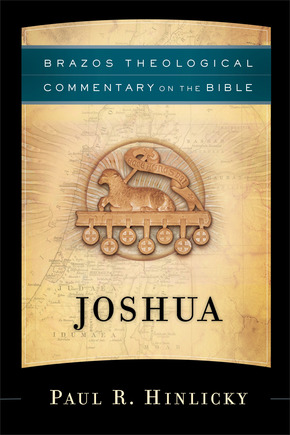 Systematic theologian Paul Hinlicky, a scholar widely respected for his contributions in contemporary dogmatics, offers a theological reading of Joshua in this addition to the Brazos Theological Commentary on the Bible series. Hinlicky compares and contrasts the politics of purity and the politics of redemption in an innovative and illuminating way and locates the book of Joshua in the postexilic genesis of apocalyptic theology. As with other series volumes, this commentary is designed to serve the church, providing a rich resource for preachers, teachers, students, and study groups.

"This commentary on one of the most ethically and theologically difficult of Old Testament books is a marvel. Paul Hinlicky here continues the kind of deep, sustained engagement with biblical scholarship that we find in his critical dogmatics, demonstrating in dazzling fashion the benefits gained when theology takes biblical exegesis seriously and exegesis views itself as incomplete without theology. Reading this commentary, one feels privileged to live in this new day of exegetical and theological cross-fertilization."

"This is a significant theological commentary on a notoriously difficult book of the Bible. Hinlicky acknowledges the difficulties, but he refuses to be drawn into the literalistic reading of Joshua that occupies both its critics and its defenders. Instead, Hinlicky engages in a literary-spiritual reading of Joshua that yields profound theological fruit for the life of the church. In dialogue with Jewish theology, this reading demonstrates in a compelling way that the book of Joshua proclaims the good news of 'YHWH who fights for us.' It also identifies this God with the crucified and risen latter-day Joshua, whom Christians claim as Lord. This commentary is a gift to all who read the Bible as Word of God."

"In his theological interpretation of the book of Joshua, Paul Hinlicky squarely confronts the dissonances and tensions in the book's account of YHWH and Israel's wars. Acutely aware that the apparently triumphalist account of victory and possession of the land is narrated for a people beaten by its enemies and dispossessed of its land, he develops a reading that uncovers the promissory character of the narrative by uncovering the God of Israel as its main character, jealously critical of all false promises. The canonical place of the book of Joshua in the world book of the Bible, telling the dramatic narrative of God's relationship with God's people from Alpha to Omega, opens a view in which eschatological glimpses of the dramatic coherence of God's story can be found. This is a reading that in its literary-spiritual approach offers a Christian reading for which victory can persuasively be envisaged as the eschatological victory of the 'other Joshua,' Jesus, who is acclaimed as Christus Victor in the face of the ultimate defeat of the cross. Such a reading, self-critically disavowing all Christian supersessionism, remains in tension with coexisting Jewish readings and establishes a Christian theological interpretation that turns out to be a powerful antidote to the ideological abuse of the Bible."