by: John Painter, David A. deSilva 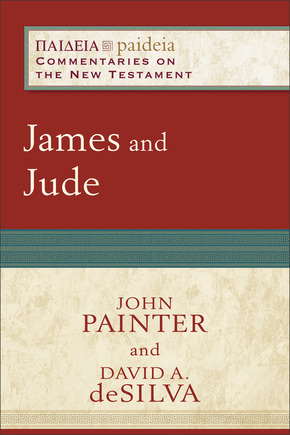 "An excellent contribution to the impressive Paideia commentary series. Students will benefit greatly from this well-written volume. Veteran scholars are also encouraged to add it to their library."--Craig A. Evans, Acadia Divinity College
In this addition to the well-received Paideia series, two respected New Testament scholars offer a practical commentary on James and Jude that is conversant with contemporary scholarship, draws on ancient backgrounds, and attends to the theological nature of the texts.
This commentary, like each in the projected eighteen-volume series, proceeds by sense units rather than word-by-word or verse-by-verse. Paideia commentaries explore how New Testament texts form Christian readers by

Students, pastors, and other readers will appreciate the historical, literary, and theological insight that John Painter and David deSilva offer in interpreting James and Jude.

"I can think of no one more qualified than John Painter and David deSilva to write on James and Jude respectively. They have produced an admirable work, both in its scholarly integrity and in its literary clarity. They have adhered to the goal of the Paideia series in not writing a detailed exegetical commentary but rather 'attending to the cultural, literary and theological settings of the final form of the text' and bringing out the rhetorical strategies employed. This increases rather than limits the value of the work, allowing for a focus and clarity that might not otherwise be possible. I recommend this work; no future work on these two letters will be complete without using it."

"James and Jude makes an excellent contribution to the impressive Paideia commentary series. John Painter's commentary on James exhibits all the traits of a master interpreter. The introductory material is rich without being dense or convoluted. The commentary itself is concise and loaded with insight. David deSilva's commentary on Jude is a gem. Who knew that so much of interest could be extracted from such a brief epistle? Students will benefit greatly from this well-written volume. Veteran scholars are also encouraged to add it to their library."

"Painter and deSilva are to be congratulated for taking their readers and the biblical text seriously. They do not dumb down their discussions, but neither do they make brute historical, linguistic, and sociological facts the centerpiece of what they say. In these pages, thoughtful and practical reflection ('Theological Issues') always follows a close analysis of the Greek text ('Tracing the Train of Thought'). The authors teach that understanding is not an end in itself; they insist that a robust faith is alien in any culture and that it is lived."

James Riley Strange, assistant professor of religion, Samford University; author of The Moral World of James: Setting the Epistle in Its Greco-Roman and Judaic Environments

"The 'theological issues' segments are particularly helpful to the student and pastor, as they highlight theological insights surfacing from the text and offer points of application for modern readers. . . . Painter's commentary is peppered with helpful insights into the text that are as exegetically careful as they are concise and accessible. . . . [deSilva] implicitly argues that Jude has a positive theological message for modern readers. . . . deSilva participates in a theological resuscitation of Jude, and rightfully so. . . . Keeping in mind its size and audience, this is a very helpful guide for those studying and preaching from James and Jude. . . . This is a concise treatment of James and Jude that makes the rhetorical and theological message of each text clear to modern readers, especially those interested in the Christian church."

"I have now read three volumes in the student-focused Paideia series and continue to be impressed by the contributors' skill in combining academic rigor with accessibility. . . . This volume offers a robust overview of the often-overlooked matter of Jesus' blood relations. . . . Painter and deSilva, together with the authors of other volumes in the series, combine historical and linguistic analysis with theological reflection, which makes these commentaries useful for those interested in bridging the gap between the ancient world and contemporary Christianity (seminarians, clergy). . . . Frequent inserts with asides [offer] additional explanations or attempts to relate ancient texts to contemporary issues."

"The attractive Paideia series [is] aimed squarely at seminarians and graduate students who have 'theological interest' in the biblical text. This goal sets the style of these fine commentaries, providing coherent essay-like exposition of the theological meaning of the text. The letter of James has received renewed attention in recent years, particularly for its strong justice message. Jude is more neglected but receives appropriate attention here."

"This volume focuses on elucidating the letters of James and Jude themselves rather than academic debates about them. However, the discussion of introductory matters demonstrates that Painter and deSilva are mindful of the work of scholarly colleagues, and their expositions clearly benefit as a result. . . . This accessible volume will be useful to pastors and serious lay students of these letters."

"Painter's commentary offers a fresh perspective on James. . . . At the end of each section, there is a subsection entitled 'Theological Issues,' in which the authors apply the passage to the modern world. These sections provide helpful insights to the readers in understanding the relevance of the text to their lives. . . . This commentary's strengths lie in its lexical analysis, canonical consciousness of James's relationship to other NT books, and its theological application to modern day situations. . . . deSilva in his commentary on Jude makes use of rhetorical analysis--successfully in my opinion--to help understand the strategies and arguments of the Greco-Roman world authors. . . . deSilva's contribution is a short but helpful commentary on Jude, especially for understanding Jude's rhetoric against the false teachers and Jude's worldview, which he shares with the apocalyptic literature of his day."

"The text is sprinkled throughout with occasional text-boxes and assorted visual aids that add interest for the reader. . . . Painter tends to emphasize the distinctive vocabulary of James and often comments on lexical and syntactical issues throughout the text. DeSilva focuses less on lexical issues, but does appropriate insights from rhetorical studies and the social sciences. Both authors bring in comparative literature to illuminate the text and occasionally interact with the views of other scholars. Painter's theological reflections sometimes move in surprising directions. . . . DeSilva's theological reflections are usually rich with insight. . . . Readers will find much that is useful in this commentary to illuminate the biblical texts."