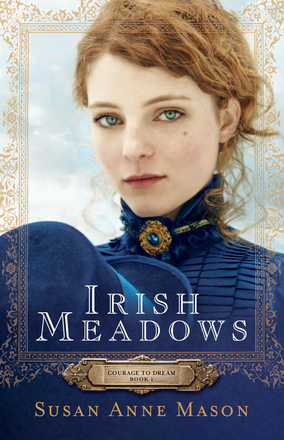 Faced With an Uncertain Future, Sometimes
All You Have Left Is the Courage to Dream

Brianna and Colleen O'Leary know their Irish immigrant father expects them to marry well. Recently he's put even more pressure on them, insinuating that the very future of their Long Island horse farm, Irish Meadows, rests in their ability to land prosperous husbands. Both girls, however, have different visions for their futures.

As the farm slips ever closer to ruin, James O'Leary grows more desperate. It will take every ounce of courage for both sisters to avoid being pawns in their father's machinations and instead follow their hearts. And even if they do, will they inevitably find their dreams too distant to reach?

"This engaging debut is part historical romance, part family drama, and all about the power of faith and love to move mountains. The spirited O'Leary clan is well drawn and appealing, ready to band together during times of trouble. Mason's enjoyable read lays the groundwork for the next installment, which promises to be just as strong as the first."