Cycle One of the Harbingers Series 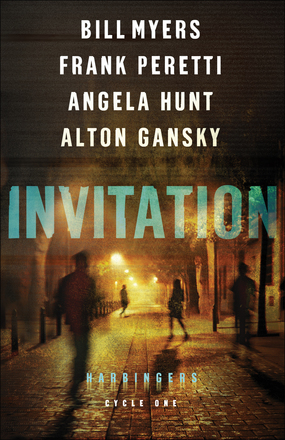 Four Strangers with Gifts They Don't Understand.
A World Falling into Darkness.
This is Harbingers.

You're invited on a journey of suspense and the supernatural as four of your favorite bestselling authors team up for a unique series.

From the minds of Bill Myers, Frank Peretti, Angela Hunt, and Alton Gansky, Invitation compiles the first four episodes of Harbingers, each following a different character.

Brought together for the first time in "The Call," the four soon realize pockets of darkness are emerging throughout the world. Whether it involves a mysterious house, the unexplainable death of animals around the world, or an otherworldly little girl, each puzzle they solve brings them closer to the ultimate explanation of what's happening. But will they discover the truth in time?

"These stories are quick to read, and the humor is wonderful. The characters are fantastic and are very well-thought-out, each one communicating their own distinct personality and role in the story."