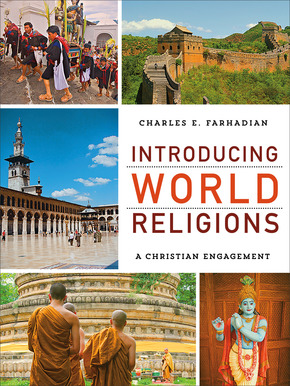 This beautifully designed, full-color textbook offers a comprehensive introduction to the world's religions, including history, beliefs, worship practices, and contemporary expressions. Charles Farhadian, a seasoned teacher and recognized expert on world religions, provides an empathetic account that both affirms Christian uniqueness and encourages openness to various religious traditions. His nuanced, ecumenical perspective enables readers to appreciate both Christianity and the world's religions in new ways. The book highlights similarities, dissimilarities, and challenging issues for Christians and includes significant selections from sacred texts to enhance learning. Pedagogical features include sidebars, charts, key terms, an extensive glossary, over two hundred illustrations, and about a dozen maps.

This book is accompanied by free online resources. Click the red eSources banner above for more information.

"This volume is a teacher's dream. It explains theories of religion in accessible language, describes the practices and beliefs of major religions, includes numerous photos and charts to hold student interest, and exhibits a fine balance between detail and overview. Charles Farhadian has written an excellent introduction to world religions for the undergraduate Christian perspective. It will remain a textbook of choice for years to come."

"Lushness of illustration aside--and there's plenty of that!--what Introducing World Religions does best is to illustrate in the person of the author himself a model for 'Christian engagement' with the world's religions, old and new. Exemplifying how to be both grounded and open, Charles Farhadian wants us to learn about the religions so that we can learn from them and with them as well. Not only that, he also realizes that learning without a location--a perspective from nowhere in particular--is an impossibility. Interspersed throughout, the author's 'Christian Reflections' will prove meaningful to Christians of all persuasions."

"Charles Farhadian has produced an excellent and long-awaited book with a well-balanced coverage on East Asian religions (Taoism and Confucianism) and East Asian Christianity, which have been very much neglected in the past. This is an indispensable text for college and other courses related to introducing world religions not only in the West but also in the East. Timely and properly written in this global age of cross-cultural necessity."

"We are more than machines. We have spirits that long for meaning, for justice, for relationships. In this clearly organized book, Charles Farhadian shows how each of the great religions offers paths for our quests. Like a conversation with a well-traveled friend, the style makes complex topics accessible and the photos help us visualize believers across the globe. In today's connected world, this book is a treasure."

"You can count on two things from this excellent introduction: (1) reliable information about the world's religions and (2) guidance in seeing that information through a Christian lens. Charles Farhadian has given us a religion text for the twenty-first century: accurate, faithful, respectful, and compassionate. It now has a permanent place on my bookshelf."

"Professor Farhadian has created a world religions text like no other. While setting up the conversation about world religions without fear and without apology from a Christian perspective, the author seeks to create a dialogue in which members of all religions would feel welcomed and fairly represented. The text is masterfully interdisciplinary, illustrating the pervasiveness of religion in human experience throughout history and the relevance of religion to every field of study. The lucid prose, wide-ranging illustrations, study helps, and use of sacred texts make the work inviting and useful for an introductory class in either an academic or church context. In addition, the book's overall framing of the conversation as well as its comprehensiveness make it of value to someone long familiar with the field. This text is truly matched to the challenge of religion in the twenty-first-century global context."

Shirley A. Mullen, president and professor of history, Houghton College

"Farhadian's Introducing World Religions addresses a Christian audience by acknowledging their distinct location while at the same time making full use of critical social-scientific approaches to the study of religion. The result is a text that will be useful far beyond church-related universities and seminaries. His introduction is a masterful multidimensional account of how contemporary approaches to religious studies have come about and how these continue to inform the understanding of religion. He then systematically addresses these concerns in the context of each religion, providing a clear framework that is particularly useful for nonexpert readers and students."

"Farhadian succeeds in providing a digestible overview of world religions from an ecumenical Christian perspective, avoiding any value judgments, a point of view that distinguishes the book from other reference offerings on the subject. A worthy addition for such collections supporting undergraduate studies in religion or theology."

"In an age of increasing globalism and shared knowledge, the need could not be greater for an up-to-date, well-researched, theologically-balanced, and feature-rich introduction to world religions from an explicitly Christian perspective. Charles Farhadian . . . offers precisely this in his new textbook Introducing World Religions. The thick-paged, full-colored volume boasts a plethora of pedagogical tools. . . . Teachers using the text will find little trouble integrating primary source readers into a world religions course. . . . Introducing World Religions successfully strikes every balance one might desire: the right amount of primary sources, secondary source engagement, illustrations, reflections, and elaborations on various aspects of world religions. Highly recommended."

"Christians need to be broadly conversant with the major beliefs, values, and histories of the ancient religions. . . . This book is an ideal volume to help us along in this journey. This volume contains a wealth of information about religious belief and the major religions in the world today. . . . The volume is well illustrated with pertinent photographs and the material is clearly laid out. . . . Perhaps what is most impressive about the book is that it is easy to find answers to the broad questions that readers might be asking. . . . Equally important and impressive is the sensitivity with which Farhadian looks at each religion from a Christian point of view. . . . This volume is a mine of good information. It contains an extensive glossary and wide-ranging bibliography. . . . This volume will be a first port of call for those who are exploring the diverse world of religions. It is a reference work that ought to be readily available in every theological and community library."

"In recent years there have been several excellent resources published to introduce other religions (and how to study them) to Christian students and non-specialists. . . . Farhadian's new book is a noteworthy addition to this field. . . . Farhadian writes from a perspective that is winsomely, yet unapologetically, Christian, and has written this textbook for a broadly Christian readership. . . . Farhadian has not only mastered the primary material and secondary scholarship on world religions, he is a gifted and committed teacher who writes with clarity, simplicity, and a sensitivity to many of the prejudices and concerns that Christian students may have as they approach the study of religion. Along with the images, maps, charts, and sidebars that encourage comparison and dialogue with other religions, Introducing World Religions offers additional features to professors who choose the book as a class text. . . . Such excellent features should help give Introducing World Religions the wide exposure and classroom use it deserves."