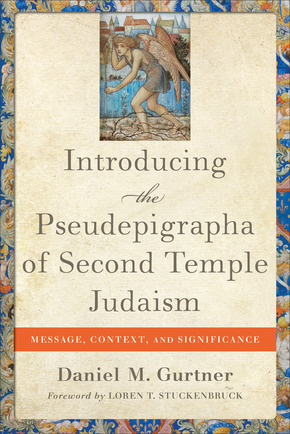 This book introduces readers to a much-neglected and misunderstood assortment of Jewish writings from around the time of the New Testament. Dispelling mistaken notions of "falsely attributed writings" commonly inferred from the designation "pseudepigrapha," Daniel Gurtner demonstrates the rich indebtedness these works exhibit to the traditions and scriptures of Israel's past. In surveying numerous of the most important works, Introducing the Pseudepigrapha of Second Temple Judaism shows how the Pseudepigrapha are best appreciated in their own varied contexts rather than as mere "background" to early Christianity or emerging rabbinic Judaism.

"Since the discovery of the Dead Sea Scrolls it has become clear that pseudepigrapha are critical for understanding ancient Judaism and Christianity. Daniel Gurtner provides a much-needed new introduction to these writings, deftly synthesizing cutting-edge specialist research into an engaging and accessible book brimming with insights that will challenge and delight. The result is a perfect resource for teaching as well as an ideal entry point for readers interested in learning more about these fascinating but neglected writings."

"This is a comprehensive, well-informed, and up-to-date introduction to a large body of literature deriving from early Judaism. Scholars are becoming more cautious about which of the so-called Old Testament Pseudepigrapha we can be confident derive from that milieu. Gurtner rightly gives most attention to those that are generally agreed to be Jewish works from the Second Temple period, but he also discusses others that have often been treated as such so that readers may be aware of the issues of date and provenance that are still uncertain. This is a very helpful reference work, both for those who are new to this field and for those who have already engaged with this fascinating body of literature."

"The collection known as the Old Testament Pseudepigrapha is an indispensable resource for appreciating developments within Second Temple Judaism and early Christianity--but where is one to begin, and what is one to look for in these texts? Daniel Gurtner's distinguished history of research in this corpus makes him a reliable guide for the uninitiated explorer. He focuses here on a judicious selection of the most influential and illuminating writings within this collection and orients the reader to what each contributes to our knowledge of the varieties of thought among, the multiform challenges addressed by, and the contributions of these writers, while also giving briefer orientations to other works throughout the larger collection. This is now perhaps the premier point of entry into these writings, which might otherwise seem inaccessible."

"Throughout Introducing the Pseudepigrapha of Second Temple Judaism Daniel Gurtner demonstrates his mastery of this important material. I like the way he has organized and arranged these complicated and diverse writings. I like the way he introduces them, and I like the way he explains why they are important and how they assist us in better understanding Judaism and Christianity in late antiquity. Interpreters of the Bible need this book on their desks."

"Introducing the Pseudepigrapha of Second Temple Judaism is a work that includes texts from the Hellenistic period that participate in and were composed alongside the biblical corpus. The Pseudepigrapha must be read with the canonical biblical collections because it exemplifies the innovative exegetical imaginations, practices of reading, and emerging beliefs that are essential to understanding the formation of Judaism and Christianity in antiquity. The texts of the Pseudepigrapha are some of our earliest expressions of commentary, hermeneutics, and liturgy from the Hellenistic period. These texts contribute to how we have come to understand performance, pedagogy, and ritual in Jewish antiquity. This is an important new book that integrates new research and new findings with commentaries and introductions to these texts."

"Gurtner has selected for discussion some of the most influential Jewish pseudepigrapha. By offering fresh overviews and mature introductions to each, he draws on recent research and makes them accessible to contemporary readers. This book holds the door open to anyone interested in scripture interpretation and seeks to let the claims of pseudepigrapha speak for themselves. After all, today, as in the past, they invite theological as well as historical and literary engagement."

Loren T. Stuckenbruck (from the foreword)

"Gurtner displays his erudition and careful analysis of the Pseudepigrapha. Anyone looking to delve into this tricky corpus should consult this volume."

"This is a particularly fine book. It is written with a crispness of style and a lucidity of intellectual communication. It is accessible to those new to the pseudepigrapha and yet contains much of interest for the seasoned expert. To achieve this in a single volume attests to the author's deep knowledge of the subject matter and to his skill in written prose. . . . This is a volume that will repay close study, and it will be a sure guide to those interested in the pseudepigraphical writings for many decades to come."

"Scholarly interest in non-canonical Jewish literature from the Second Temple Period (the Pseudepigrapha) has led to the development of a new field of study. This work is a good introduction to that field. . . . [It] will be a well-used resource in graduate courses on the Pseudepigrapha."

"Gurtner recovers the importance of these overlooked Jewish writings for their link to the Hebrew Bible and the history of Israel. He demonstrates how the key works of the pseudepigrapha can be understood and valued on their own terms in their respective contexts, and not just as background to rabbinic Judaism and early Christianity."

"Gurtner's volume provides interested readers with an up-to-date orientation to a body of writings that have been the object of much scholarly attention in recent decades."