In the Shadow of Denali

series: Heart of Alaska, The 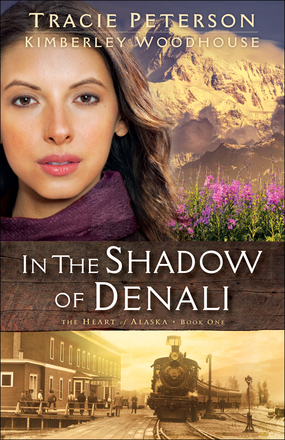 Cassidy Ivanoff and her father, John, work at the new and prestigious Curry Hotel near the foot of Mount McKinley--Denali as it's still called by the natives. John is the wilderness and exploration guide for the wealthy tourists while Cassidy works in the kitchen as Cook's assistant. The entire staff buzzes with excitement during the busy days preparing for the President's imminent visit. His historic trip to dedicate the new national park on his way to driving in the golden spike to officially complete the Alaska Railroad will be the beginning of a new era for all of them and place The Curry at the heart of Alaska.

Allan Brennan travels to the Curry Hotel to be an apprentice to the seasoned Alaska mountain guide, with hopes of discovering the truth about his father's death on the mountain years earlier. His father's business partner blames the guide for Henry Brennan's untimely death, but Allan cannot be at peace until he knows for sure. He finds an unlikely ally in Cassidy, and as the two begin to look into the mystery, they suddenly find that things are much less clear, and much more dangerous, than either could ever imagine.

"This novel is a beautiful story that takes place in the height of Alaska's renaissance."

"Set in the early 1900s, this first novel in the Heart of Alaska series hosts a cast of genuine characters who possess great strength and faith. The Curry, Ala., setting is captured in all of its glory. Cassidy and Allan's friendship-turned-romance incorporates nicely with the spiritual themes and mystery plotline."

"Coauthors Peterson and Woodhouse begin a new series drawing on Alaska's rich history, featuring the authentic, lushly detailed setting and fleshed-out characterizations that fans of this duo have come to expect. Readers who enjoy Dani Pettrey will delight in immersing themselves in the Last Frontier."