The Drama of Christian Ethics 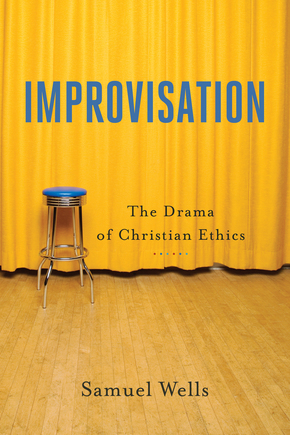 This introductory textbook establishes theatrical improvisation as a model for Christian ethics, helping Christians embody their faith in the practices of discipleship. Clearly, accessibly, and creatively written, it has been well received as a text for courses in Christian ethics. The repackaged edition has updated language and recent relevant resources, and it includes a new afterword by Wesley Vander Lugt and Benjamin D. Wayman that explores the reception and ongoing significance of the text.

"A book on improvisation cannot be a book about improvisation, but it must 'be' that which it is about. No easy task, but both the content and execution of Improvisation do what the book says. With concepts such as 'blocking' and 'overaccepting,' Wells provides us with skills for the imagination that we might live more faithful (and humorous) lives as Christians. Like all great improvisers, Wells has a gift for telling the right but unexpected story at the right time. This extraordinarily sophisticated book can be read for profit by those well schooled in the literature of theology and ethics, but more important, this book will satisfy those who hunger and thirst for an account of what it means to live as a Christian in our day."

"This is one of the most relevant, stimulating, and lucid books on Christian ethics to appear for some time. It provides an excellent introduction to current debates in Christian ethics while making its own vivid and sometimes controversial contribution. It is in many places profound and original, and it deserves to be widely read and discussed."

Duncan B. Forrester, University of Edinburgh

"Improvisation indeed. Bold, creative, and yet showing a deep mastery of his craft, Samuel Wells charts a fresh course for Christian theological ethics that is at once artful, contemporary, and faithful both to the Bible and to the best of Christian ethical reflection. While Wells rightly refuses to concede that Christian ethics is primarily about problem solving, he nevertheless offers back to the church its own imaginative resources for confronting the more intractable dilemmas of our age. This is a very important book."

"Samuel Wells is against originality, since he wants the church to do what comes naturally to it. Yet in this remarkable discussion of improvisation in Christian ethics he has given us a work of striking originality that will surely help the church to be more imaginative in its faithfulness and more faithful in its imagination."

"The art of improvisation in theater--a kind of jujitsu of the imagination--shapes Samuel Wells's fresh, engaging approach to Christian ethics. . . . Particularly striking is Wells's description of six improvisational practices which, he argues, illuminate the way the Christian community discerns and acts. Perhaps his most creative contribution is the suggestion that the practice of 'overaccepting' provides a metaphor for the preferred approach of the Christian community to new actions or concepts, and especially to discord in the world. . . . Wells's unusual combination of Anglican and Anabaptist thought is provocative. He has a strong sense that moral formation must be liturgically rooted, particularly in the Eucharist. His emphasis on the close relationship between worship and ethics and on attending to the moral formation which prepares Christians for ethical improvisation is a critical matter for all communions. . . . With this book Wells makes us an offer. As teachers, pastors, and thoughtful disciples of Christ, we would do well to overaccept it."

"This book is conversant both with academic issues and with the liturgical and pastoral practices of congregational ministry. . . . Wells's account represents a significant advance for the discipline of Christian ethics. The language of 'overaccepting' resonates with Radical Orthodoxy's efforts to 'outnarrate' their secular counterparts, and 'reincorporation' may improve how Christian ethics has dealt with marginalization and exclusion. The theory is excellent. The practice can be as well. . . . Wells seems well equipped to carry out his ethical improvisations to the great benefit of both church and world. 'Give me your hands, if we be friends.' May his company of prayers increase."

"This book is a treasure, a genuine contribution to the field of Christian ethics. In it Wells offers a constructive account of Christian ethics that critiques quandary ethics on the one hand and postliberal ethics on the other. He argues persuasively that the Christian practices of worship, especially baptism and Eucharist, can be helpfully thought of in terms of theatrical improvisation. Such a rethinking uncovers resources in these practices that might otherwise be missed, resources that can guide the church as it seeks to live faithfully in the world. . . . This book is commendable. In a creative and original way Wells shows how ethics is not about being creative and original. Wells's notion of overaccepting is the finest response I have seen to those who argue that an ecclesial ethic of character will likely be sectarian. As Wells makes clear, sectarianism is an unacceptable block to the world's offers."

"What is God in Christ requiring and enabling us to be and do in today's complex world? Samuel Wells in Improvisation provides a significant and evocative approach to answering this perennial question. . . . There is much to commend Wells's offer."

"[Wells] has written a book both strangely familiar and familiarly provocative. . . . By writing winsomely--humorously in places, sorrowfully in others, thoughtfully and accessibly throughout--and thinking creatively ('questioning givens', Wells would say), the entire book is literally exemplary."

"In this very original and engaging account of ethics, [Wells] draws on the concepts and practices of theatrical improvisers in order to develop a picture of ethics as a communal activity neither 'conservative' nor 'liberal,' but rather creative. . . . While Wells self-consciously works within the Christian tradition, the book could easily be used in a comparative setting and sheds considerable light on ethics in general. . . . The book offers several features that would make it an attractive classroom text. . . . Wells does not assume, as do many writers trying to be constructive, that the reader already knows the field. . . . He peppers his conceptual work with concrete and very striking stories, a necessity for engaging student interest. . . . Unlike much work that is genuinely constructive, Wells's terms seem to make intuitive sense very quickly, perhaps because they are not abstractions, but concrete practical strategies. . . . Wells's background as a preacher is shown in his use of repetition and organization. Arguments proceed very logically and clearly. . . . Wells's book offers an attractive and accessible way into some of the moves of postmodern and postliberal ethical reflection, as well as an original proposal that is certain to get students thinking about their lives and actions in novel and helpful ways."

"Sam Wells's first major book Transforming Fate into Destiny was a barnstormer and this second book does not disappoint. Indeed here Wells is speaking with a greater independence. . . . [Wells's thesis has] vitality and innovative power. Not only are the standard deontological and consequentialist approaches to ethics criticized--earlier, dry, theatrical approaches to theological ethics, largely from a Protestant base, are also left behind. . . . This book, through its narrative, its own improvisation, and its integrated theological reflections does itself have the power to change. . . . This reader felt called . . . to prayer and thanksgiving--that is eucharist."

Reviews in Religion and Theology

"Wells's is among the freshest and most important new voices in theology and ethics. In his work one can sense the wisdom not only of a teacher but of a priest, leading students through difficult ideas as gracefully as he guides people of faith through their lives."

"The author uses narrative well, generously illustrating his arguments with stories and examples. The backbone of the project is a solid understanding not only of traditional moral categories but of such more recent trends as a liberation perspective. While offering a basic and academically sound morals text, Wells at the same time calls the reader to generosity, to attention to worship and community, to radical conversion--themes usually found in less rigorous spiritual reading. This book could easily be used in an academic setting, but it could be equally useful for Christians wrestling with their own formation and the questions that present themselves in the modern drama of life."

"[Wells] breaks new ground. . . . Improvisation is an interesting and subtle take on Christian ethics, needing to be read by just about every thoughtful person in the church."