A Theological Introduction to the Bible 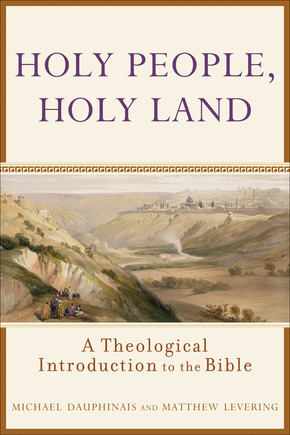 "Provides a much-needed focus on scripture's theological meaning as a basis for instruction in Christian doctrine. Written from a Catholic catechetical and theological perspective but informed by sound ecumenical exegesis, this book will nourish one's Christian faith."--William Kurz, SJ,

The second-century heretic Marcion believed it was impossible to reconcile the Old Testament message of Law and sacrifice with the New Testament message of grace and forgiveness. Even today, many believers struggle to find unifying themes in scripture that can make sense of its great diversity.

Dauphinais and Levering suggest that holiness--that is, love as communion with God and neighbor--is the common thread that runs through scripture. Holiness, they say, manifests itself in profuse biblical language about a promised land and a holy people, all of which reveals a holy God desiring to recreate us in his image. The authors point out that this idea is as old as the church itself and as new as the work of contemporary biblical scholars.

Holy People, Holy Land is a mind-expanding journey through the Bible from Genesis to Revelation. The authors reveal that the Old Testament themes of land and Law, temple and covenant, all begin and end with God's gracious salvific work in Christ, who fulfills the Law, establishes perfect justice, and is the true Temple.

This book is intended for undergraduate students in theology and the Bible, both Catholic and Protestant, who seek to learn the story of how love--revealed most prominently in the sacrifice of Christ--creates a holy people equipped to serve God and one another.

"This book throws welcome light on living 'between the times' of Christ's resurrection victory and its consummation in the oncoming kingdom of God."--Richard John Neuhaus, author of American Babylon: Notes of a Christian Exile

"Michael Dauphinais and Matthew Levering's reading of the Bible from Genesis to Revelation provides a much-needed focus on scripture's theological meaning as a basis for instruction in Christian doctrine. Inspired by St. Augustine, Dauphinais and Levering read the Bible theologically. Following Augustine's catechetical approach to the Bible (as distinct from a 'biblical theology'), the authors illuminate central points rather than get lost in the myriad biblical details. They seek the 'meaning of God's plan for human history as revealed in the Bible.' Written from a Catholic catechetical and theological perspective but informed by sound ecumenical exegesis, this book will nourish one's Christian faith in the biblical story and perspective on reality in response to today's dominant secularistic, ideological, or relativistic worldviews. It will also whet readers' appetites to go to the Bible for further nourishment by God's Word."--William Kurz, SJ, Marquette University

"[The authors] consider holiness--defined as a condition of balance and innocence before God and his creation--to be the underlying theme of all scripture. As such, it provides a paradigm for God's intervention in human affairs, unifying sacred history as the record of God's reaching out to a world in need of grace. The authors . . . [focus] on the biblical stories as reflections of God's hand in human affairs. As the title suggests, they chart a pattern of holiness, not just in people, but in the land the people possess. . . . Although written for undergraduate theology students . . . the material is easily grasped by the average reader and is highly recommended for Catholics and Protestants alike."--Publishers Weekly (starred review)

"Beginning with Genesis and moving through Revelation, the authors show that the Bible focuses on holiness, envisioned as love of God and neighbor. Reading in this light, they explore how themes in the Hebrew Bible--such as Covenant, Land, Law, and Temple--all contribute to shaping the people of Israel in holiness. . . . This eminently readable work of conservative Catholic scholarship is recommended for theological libraries, undergraduate libraries, and larger public library religion collections."--Christopher Brennan, Library Journal

"Each chapter skillfully weaves the covenantal promises and blessings to God's people progressively through the unfolding of Scripture. . . . The authors support their arguments with considerable footnotes that include early classics such as Aristotle, Athanasius, Augustine, Bernard of Clairvaux, and Thomas Aquinas, but also more recent sources such as N. T. Wright, Dietrich Bonhoeffer, and John Paul II. . . . This work proved to be challenging and provocative. . . . Holy People, Holy Land is an engaging worthwhile investment, especially for any conservative evangelical Protestants who need a better understanding of contemporary Roman Catholic theological works."--John Easterling, Journal of the Evangelical Theological Society

"The authors have read widely, showing acquaintance with the biblical theological works of Romanist and non-Romanist alike. . . . While they are familiar with the more critical tradition of scholarship, they do not get sidetracked in their reading. . . . Holy People, Holy Land is a well-written, helpful review or survey of Israel's history. But it is much more than that. It serves as a sometimes almost devotional discourse that continually pulls together Old Testament revelational elements and themes . . . and connects them with fulfillment in Jesus Christ and the Christian church of the New Testament redemptive era. . . . Preachers would benefit in reading many portions of Holy People, Holy Land, especially the chapters dealing with Old Testament material. . . . A useful index concludes [this book]."--Mark D. Vander Hart, Mid-America Journal of Theology

"As far as christological readings of the entire Bible are concerned, this book will prove helpful to its targeted audience. . . . It achieves a theologically relevant coherence to the entire scriptural story. The theme of humanity dwelling in the presence of God--expressed in the title phrase, 'holy people, holy land'--proves a perceptive interpretive framework into which the writers incorporate an impressive amount of biblical material. . . . Perhaps due to their Roman Catholic background, the writers also trace with great insight the indispensable role of liturgy and sacrament in the worship of God. . . . The writers' refusal to grant historical criticism 'the primary place in the Church's reading of her scripture' marks a bold reclamation of the Bible for the church. It is good to see an introductory text that seeks not to regurgitate scholarly consensus but to foster a love for the God it describes."--Ira Brent Driggers, Theology Today