God of the Possible

A Biblical Introduction to the Open View of God

by: Gregory A. Boyd 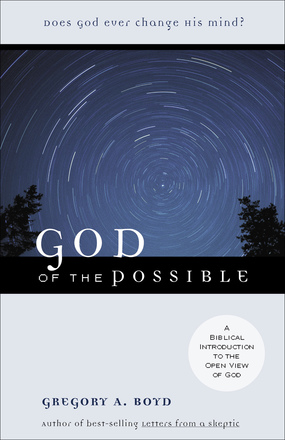 Perhaps no theological topic is more hotly debated within evangelical Christianity these days than God's foreknowledge. Is the future exhaustively settled, or does it include possibilities (maybes)? In encountering such questions, a growing number of evangelicals are becoming dissatisfied with the classical view of foreknowledge and have accepted an alternative, open view of God. In God of the Possible theologian Greg Boyd offers an accessible introduction to the freewill theism position.

Boyd begins by laying out and critiquing the "motif of future determinism," which forms the basis of the classical view of foreknowledge. He goes on to explicate several scripture passages that depict the future as partially open and that God therefore knows it as such. He then discusses some practical areas in which he thinks the open view can make a positive difference. Finally, Boyd addresses the most frequently asked questions and typical objections raised against the open view. An appendix explores other passages supporting the open view of God and the future.

Exploring issues of foreknowledge, freedom, and the future, Boyd presents biblical, theological, and philosophical insights into the openness issue in this introductory, yet provocative, book. While geared particularly for a lay readership, more advanced students of theology will also benefit from his presentation.

"There is no doubt that issues of Christian faith are now set in a radically new and demanding situation in U.S. society. In response, there is a great, penetrating theological ferment under way that stretches across the spectrum of liberal and conservative theological interpretation. In this book Greg Boyd offers a thoughtful, caring, and courageous contribution to that new interpretive undertaking, a contribution that is marked by careful, disciplined thought and sensitivity to the materials with which he works. His careful analysis makes clear that the classical theological tradition has been 'misguided' in its governing categories imposed from Hellenistic philosophy. As a consequence, theological development has proceeded in categories that have distorted the truth and radicality of biblical revelation and left the church with much to unlearn. Boyd's work is not primarily critical, however, but constructive. He is able to show in clear and responsible biblical interpretation that the future is not closed off by a settled divine foreknowledge, but the future is left open for possible emergents that are not yet in purview, either divine or human. The old theological conversation has been governed by scholastic formulations of 'predestination-free will.' Boyd is wise in refusing to submit to such categories but rather follows the contours of the text that does not conform or submit to such reductionist categories. The outcome of his study is to take the Bible seriously, to notice how venturesome is the decisive text of revelation and how inscrutably it moves beyond all of our intellectual attempts to control or domesticate. By his courage Boyd makes available a genuinely evangelical portrayal of the biblical God, a portrayal that takes with deep seriousness the course of lived human history. Readers who want old settlements should be on notice. But those who are open to the leadings of the testimony of Scripture, Boyd invites to a faithful and vigorous rethink."
--Walter Brueggemann, Columbia Theological Seminary

"Greg Boyd presents a powerful argument for the open view of God as omnipotent, sovereign, and yet vulnerable. Boyd's God is alive and personal as well as infinite and perfectly wise. The portrait of God drawn here is unrecognizable compared to the caricatures of openness theism's God crudely crafted by many of its critics. It is much more majestic and beautiful as well as biblical. Inquiring Christian minds will love this book for its creativity and clarity. Closed minds will despise it for the same reasons. Those who have been merely 'open to the openness of God' will find its arguments difficult to resist. Everyone who reads it will be challenged to reconsider traditional ideas of God in the light of a fresh reading of Scripture. Baker Book House is to be commended for living up to its Reformed commitments by publishing this book. To be 'Reformed' is to be open to new light from God's Word: 'reformed and always reforming.' "
--Roger E. Olson, George W. Truett Theological Seminary, Baylor University

"Gregory Boyd gives a strong and accessible argument for views that challenge some traditional theological positions. Many will disagree, but fair-minded readers will come to understand both that the 'open God' position is motivated by a desire to be faithful to the Bible and that it is consistent with both classical Christian orthodoxy and evangelical distinctives. Boyd himself provides a fine example of how evangelical Christians may disagree in a loving and respectful manner."
--C. Stephen Evans, professor of philosophy and dean for research and scholarship, Calvin College

"A stunning book--on the biblical truth of an open future and the revolutionary benefits of believing it. What a great way to begin the new millennium theologically with the open view of God. I only hope that his witness is heard before the self-styled guardians of the tradition marginalize him."
--Clark H. Pinnock, McMaster Divinity College

"This exceptionally engaging and biblically centered text defends a theological claim that is generating heated controversy among evangelicals: that from God's perspective, the future is partly open, a realm of possibilities as well as certainties. Boyd, professor of theology at Bethel College (St. Paul, Minn.) and author of Letters from a Skeptic and God at War, displays a remarkable ability to make 'open theism' accessible to a wide audience. Open theism usually receives a cool reception among evangelical theologians, whose views of divine foreknowledge often echo Augustine, Aquinas, and Calvin, as well as Hellenistic philosophical theology. This classical tradition interprets God's perfection as eternal changelessness, ruling out the possibility that God could learn new information, or that God's intentions could change. Boyd sidesteps the more abstruse theological debates surrounding this issue in favor of a patient, but not pedantic, exposition of a 'motif of future openness' in biblical narrative and prophecy. These biblical texts repeatedly portray God as changing plans in response to human decisions, viewing future events as contingent, and even being disappointed at how events turn out. Boyd clearly believes the debate over open theism has gotten off to an unfortunate start, as disagreements about the 'settledness' of the future have unnecessarily been interpreted as challenges to God's omniscience or sovereignty. This convincing, clear book promises to raise the caliber of argument in the controversy."
--Publishers Weekly (April 24, 2000)

"Boyd argues convincingly from both Testaments in a thoroughly reasonable, well-researched, and intriguing approach understandable to lay persons....This is a must-read for people concerned with free will vs. predeterminism."--CBA Marketplace (June 2000)