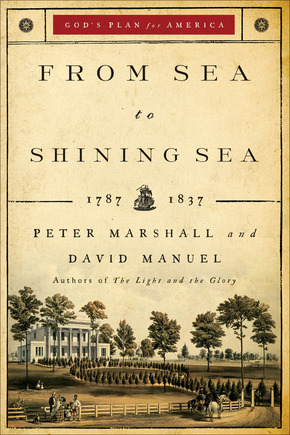 Does God really bless a nation that honors Him?

After the Revolutionary War, our newborn country went through an exciting era of growth and innovation. Was God intervening on behalf of the struggling nation? In this fast-paced sequel to the bestselling The Light and the Glory, you'll learn how America's future was threatened by greed, pride, and self-righteousness. You'll also see how, in the midst of turmoil, God raised up leaders to shape our unique country and character.

Newly revised, From Sea to Shining Sea is the riveting story of a country moving forward--but always with an eye on the Christian heritage of the past.

"Highly recommended for its scholarship, but also for its emphasis on character and the impact of spiritual revival in history."
--Moody magazine

"It is sad, and sometimes infuriating, how glibly we tend to treat the Civil War, as if the Christian aspect of the slavery question were of merely passing consequence. . . . A wonderful depiction of the heady days before the great war."
--William F. Buckley Jr., National Review