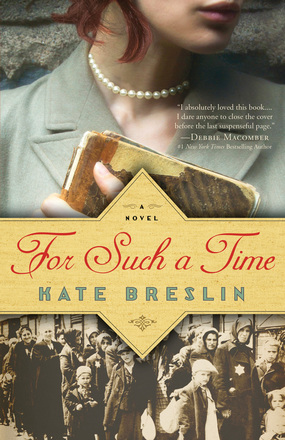 In 1944, Hadassah Benjamin feels abandoned by God when she is saved from a firing squad only to be handed over to a new enemy. Pressed into service by SS Kommandant Colonel Aric von Schmidt at the transit camp of Theresienstadt in Czechoslovakia, she is able to hide behind the false identity of Stella Muller. However, to maintain her cover as von Schmidt's secretary, she is forced to stand by as her own people are sent to Auschwitz.

Suspecting her employer is a man of hidden depths, Stella appeals to him on behalf of those in the camp. Aric's indulgence gives her hope even as she risks discovery with every attempt to help the prisoners. When her bravery brings her to the point of ultimate sacrifice, she faces an excruciating choice. God may have brought her to the camp for such a time as this, but how can she save her people when she cannot save herself?

"I absolutely loved this book. For Such a Time kept me up at night, flipping the pages and holding my breath wanting to know what would happen next. Based on the Biblical book of Esther, the story takes the reader to a concentration camp inside World War II Czechoslovakia, where a young Jewish woman has captured the attention of the Kommandant and has the opportunity to save her people, much as Esther did in the Biblical account. The story is gripping, compelling, and I dare anyone to close the cover before the last suspenseful page."

"When I finished Kate Breslin's novel for the first time, I had an urge to flip back to page one and start reading all over again. It's that good. For Such a Time is an intimate portrait painted on a grand scale, bringing to life the drama and pain of suffering with the triumph and joy of freedom. This book deserves a wide audience, and newcomer Breslin has a bright future."

"An engrossing and inspiring story from a talented new writer."

"Kate Breslin's retelling of the Esther story in the context of Nazi Germany is a stroke of genius! For Such a Time breathes new life into this powerful story."

Bob Hostetler, author of 35 books, including the historical novel, Northkill

"Breslin's debut novel is a must read. The compassionate soul of the protagonist set against the horrific background of WWII concentration camps provides a hauntingly beautiful portrait of the best and worst of mankind. From the first page to the last, readers will be captivated by this story."

"Breslin is an impressive storyteller, and her premier novel will keep you turning pages until the very end."

"A heart-rending tale of love, loss, and redemption. . . . Fans of historical fiction, especially those who enjoy complex dramatic stories, will want to pick up this title."