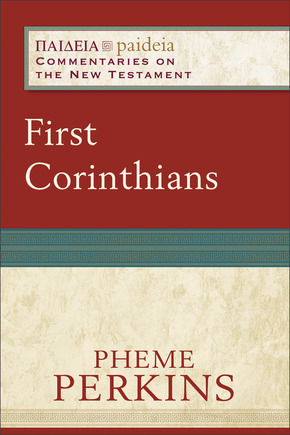 "Learned and concise. This is an ideal commentary for students and pastors seeking a reliable guide to one of Paul's most important letters."--Frank J. Matera, Catholic University of America
In this addition to the well-received Paideia series, a respected New Testament scholar examines cultural context and theological meaning in First Corinthians. Paideia commentaries explore how New Testament texts form Christian readers by
Students, pastors, and other readers will appreciate the historical, literary, and theological insight Pheme Perkins offers in interpreting First Corinthians.

"Professor Perkins has produced a commentary on 1 Corinthians that has the merit of being both learned and concise. She provides readers with a wealth of information about the cultural and historical background of the text without neglecting its theological meaning and significance. This is an ideal commentary for students and pastors seeking a reliable guide to one of Paul's most important letters."

"This relatively concise and accessible commentary helpfully situates Paul's letter in its first-century context through its valuable discussions of key background issues and its generous use of sidebars with quotations of relevant material from ancient sources. Pastors and students will benefit from the contextual focus as well as from Perkins's informed approach to theological interpretation, even if they reach some different conclusions along the way."

"Pheme Perkins is renowned for her independence of mind and the focus and precision of her thinking. Here she combines these rare qualities in an account of 1 Corinthians that is thoroughly up to date on the best scholarship and elegantly brings its intended readership into the central questions of the letter--cultural, literary, and theological."

"Recent scholarly commentaries . . . have drawn attention to the importance of Greco-Roman backgrounds for studying 1 Corinthians. This is a significant matter that most reading the letter from a modern perspective would miss. Perkins develops this aspect well and in an engaging manner in her concise commentary on 1 Corinthians. . . . Many shorter commentaries do not have nearly the list of secondary sources as Perkins uses. This is truly a distinguishing mark. . . . Many aspects make this volume accessible to those with an undergraduate or master-level education. The commentary does not focus on technical language or things that would interest scholars alone. Perkins also writes in a clear and understandable manner. Paragraphs flow together easily as the whole is considered rather than the particular parts of the epistle. The amount of information is also not overwhelming. . . . This commentary provides in a concise and accessible manner a great amount of exposition on 1 Corinthians. It will be of benefit to pastors and teachers who are looking for the main theological ideas of Paul's writing as they are addressed to those in Greco-Roman Corinth."

"The book is clearly and beautifully laid out, with frequent boxes containing helpful background information. . . . Perkins's commentary is engaging and, despite the limited space in this short volume, manages to present the major critical issues with some style. The theological reflection throughout is thoughtful and avoids any sense of being prescriptive. The book is up-to-date with the recent scholarship on the letter and would make an excellent first port of call for students embarking on a study of First Corinthians or, more generally, Paul."

"I anticipated from Perkins a book that would be written well, informed, informative, and a useful dialogue partner. The commentary delivers on all four fronts: Perkins writes with clarity, integrates scholarship effectively, and reaches conclusions thoughtfully. Best of all, she stimulates new thoughts. . . . As a textbook, it incorporates much helpful historical information, and it balances well the focus on the epistle's argumentative flow and rhetorical markers with attention to exegetical questions. . . . Additional features advance the volume's pedagogical function. . . . Scholars have learned a great deal about social history and rhetoric in the last few decades. Perkins draws from these accumulated studies and weaves topics such as wealth, manual labor, oratory, moral philosophy, ancient religion, and other cultural phenomena into her discussions with admirable facility. The volume provides an effective platform for teachers to launch into more detailed analysis or to press students to reflect critically."

"Perkins writes clearly about the 'cultural, literary, and theological settings in which the text took form,' and also makes connections to current issues in church and society. The densely-packed text is broken up throughout by many tables, sub-outlines, photos, and sidebars with relevant quotations from ancient authors. . . . I recommend this commentary. It is well-written, concise, rich with cultural insights, and theologically reflective."

"This relatively new series is aimed squarely at students of the New Testament (e.g., seminarians, theology majors, graduate students). The goal is for the reader to understand the context and content of the particular New Testament book under consideration. Rather than present a verse-by-verse exposition, the commentators consider each cohesive segment of the biblical book. All these goals are well accomplished by Pheme Perkins. . . . In her introduction to the letter and in the body of the commentary she provides a thorough exposition of Paul's theology and its relationship to the wider context of Judaism and the Greco-Roman world. Numerous and informative sidebars provide the reader with ample quotations from ancient authors and observations about the social, political, and religious context of Paul's world; these are accompanied by various outlines, maps, and apt black and white photos of pertinent sites. All of this makes this commentary on 1 Corinthians a valuable resource for the intended audience."

"A model of the [commentary] genre. This is partly because of the freshness of so many of Perkins's insights, and partly because she has set the work out in sections, rather than as a verse-by-verse treatment of 1 Corinthians, so that it is possible for the reader to see the wood rather than the exegetical trees. First Corinthians is clearly a text that Perkins has sat closely with over very many years. There is no substitute for that kind of long consideration. . . . This is a reader-centered commentary, aimed primarily at students, and it can safely be put in the hands of those who are just beginning their study of the letter. . . . Taken as a whole, this commentary gives the reader a strong sense of how the argument of the letter holds together. . . . Perkins's final theological reflections are characteristically perceptive on the notion of growth into a single church. Not all scholars will agree with all of her conclusions, but that is not important; she always plays fair in building her case, and her great strength is in the careful disentangling of the interwoven threads that can make Pauline argumentation so baffling at first sight. I warmly commend the book."

"As an expert on the Greco-Roman cultural setting of early Christianity, Pheme Perkins . . . provides a welcome volume on 1 Corinthians. . . . The main strength of this commentary rests with how Perkins lays a foundation for reading 1 Corinthians within the Greco-Roman context of Paul's day. . . . Perkins's writing is concise and follows a logical progression. Her commentary is thorough enough that it can provide a student with a working framework through which to read and comprehend the important issues in the epistle. Simultaneously, the theological themes presented in the introduction and the sections on theological issues in each chapter provide solid insights for pastors working on sermons. . . . Perkins has written a valuable resource that introduces its reader to the current scholarship on 1 Corinthians and provides a stepping-stone for further reflection and research."