First and Second Timothy and Titus 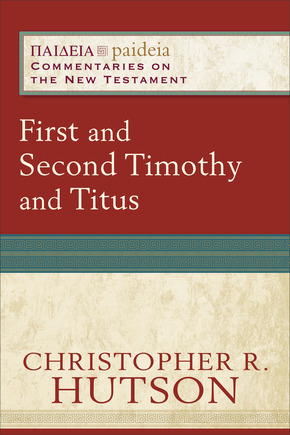 Drawing from many parts of the broad Christian tradition, this commentary on First and Second Timothy and Titus helps readers gain a stronger understanding of early Christian ministry in the first two centuries. Paideia commentaries show how New Testament texts use ancient narrative and rhetorical strategies to form and shape the reader and provide a fresh reading of the biblical texts in light of ancient culture and modern issues. Students, pastors, and other readers will appreciate the historical, literary, and theological insight offered in this commentary.

"This commentary is sound, reasoned, and so clearly written that it is a pleasure to read. The author is conversant with relevant literature from Aristotle to the Talmud to Erasmus, and he introduces it in illuminating ways. His conviction that the Pastorals are meant for the formation of ministers allows him to approach disputed questions with an open mind as he guides readers toward responsible interpretation."

"Hutson wrote his dissertation on the Pastoral Epistles and has spent the past two decades continuing his research on these important yet challenging documents. This fine commentary is the culmination of his thorough investigation of the letters in light of ancient sources and modern scholarship. It merits the attention of a wide range of readers, from seasoned scholars to pastors and priests seeking to expound the biblical text responsibly to an increasingly complex modern world."

"Hutson's volume takes its place among leading commentaries and innovative studies on the Pastoral Epistles. Reading them as a collection of letters for forming and evaluating ministers, Hutson presents honest and often challenging discussion of cultural differences between the ancient world and our own. His commentary is deeply informed by the language and training of ancient philosophical schools and approaches to curriculum that help us to understand the value of reading the Pastorals as a guide to the formation of ministers, highlighting the relationship between education and leadership. Both learned and accessible, this commentary will be of great value to scholars, students, and those engaged in the challenges of contemporary ministry."

"Hutson resists the temptation to bury his reader in unresolved arguments of authorship and aptly provides lucid exegetical analysis of the text as correspondence between the 'Pastoral Paul' and his associates. Hutson's ability to offer insightful substance in accessible style and to draw the reader into the learning experience makes his book a valuable resource for all seeking to grow in knowledge and personal spiritual growth. I highly recommend it, especially to those who are in Christian ministry."

"As a trustworthy trail guide, Hutson leads readers through the overgrowth of scholarship that blankets the forest of the Pastoral Epistles and through its fragrant promise for youthful ministers, while cautioning against the poison oak along the path. Hutson deftly guides readers beyond the slippery ravines of authorship and the nature of the opponents, directing our attention instead to the vista of the Pastorals' broader aim of negotiating a threatening imperial situation. In conversation with ancient philosophical, political, and religious analogues, Hutson deftly exposits the Pastorals' message and rhetoric as well as the texts' reception history among late antique monastics, medieval mystics, reformers, and feminist scholars. This commentary is to be celebrated as a distinctly beneficial resource for aspiring ministers and for students of the Pastorals."