by: Timothy A. Brookins 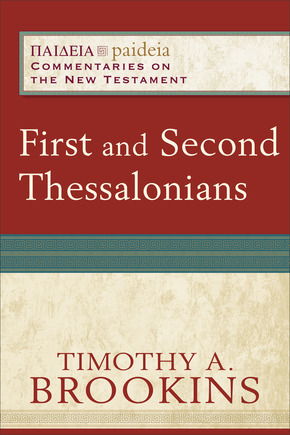 Though often neglected among readers of Paul's letters, his two surviving letters to the church in Thessalonica are highly valuable sources for reconstructing the theology of Paul and the history of the earliest Christian churches. First and Second Thessalonians also stand out for their intensely personal nature and provide a rare glimpse into Paul's methods of pastoral care. This practical commentary interacts with the best scholarship on the Thessalonian letters while offering fresh new insights.

"Brookins has produced a stunningly incisive treatment of the two Thessalonian letters. A particular strength is the way in which he highlights the role of Paul as pastor, who sustains and nurtures communities while absent from these new believers. Brookins also focuses on these letters as repositories of the earliest written expression of Paul's theology. In this way, Brookins leads readers deep into the cradle of the Christ movement, highlighting the development of group identity, discussing expressions of eschatological fervor, and delving into the emergence of Pauline theology. With so much penetrating thought packed into such an accessible and readable volume, it is a master class in scriptural interpretation."

"This commentary on First and Second Thessalonians is a scholarly tour de force, providing a state-of-the-art analysis of these controversial epistles. Brookins's mastery of the literary, numismatic, and epigraphic evidence in its Second Temple, Greco-Roman, and patristic contexts affords him sympathetic insight into--and incisive solutions for--the interpretative problems of the epistles. After addressing the authorial, textual, literary, structural, and ecclesial issues, Brookins expertly traces the philosophical, rhetorical, and social underpinnings of the epistles while unfolding the riches of the apostle's theological exegesis and paraenesis. Helpful selections from ancient sources are provided for scholars and lay readers alike along with stimulating discussions of major theological themes and their pastoral relevance. This is a major contribution to Thessalonian scholarship."