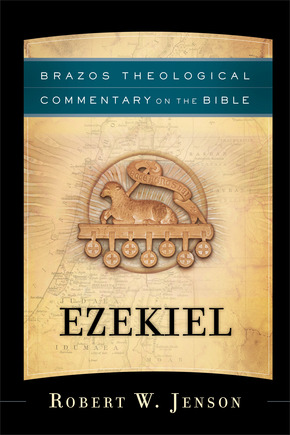 Pastors and leaders of the classical church—such as Augustine, Calvin, Luther, and Wesley—interpreted the Bible theologically, believing Scripture as a whole witnessed to the gospel of Jesus Christ. Modern interpreters of the Bible questioned this premise. But in recent decades, a critical mass of theologians and biblical scholars has begun to reassert the priority of a theological reading of Scripture.

The Brazos Theological Commentary on the Bible enlists leading theologians to read and interpret Scripture for the twenty-first century, just as the church fathers, the Reformers, and other orthodox Christians did for their times and places. In this compelling addition to the series, esteemed theologian Robert Jenson presents a theological exegesis of Ezekiel that is well suited for Old Testament, Ezekiel, prophets, and theological interpretation courses.

"Robert Jenson brings to the interpretation of Ezekiel years of theological study, a deeply trinitarian vision, and an ability to read the Bible as Christian scripture. That combination vivifies the dry bones of much standard biblical exegesis and illumines what is surely one of the strangest of biblical books."--Gilbert Meilaender, Valparaiso University

"Here is a faithful Christocentric reading of Ezekiel that sits happily alongside this Jewish reader's cherished volume of Moshe Greenberg's commentary on Ezekiel. Jenson's Christocentric reading is also a deep reading of this text, drawing up dimensions of form and force and meaning that will also serve the rabbinic reader: not because of any leveling or syncretism, but because, once drawn up, these dimensions may then be drawn forward in their different ways by the differing communities of rabbinic and Christian readers."--Peter Ochs, University of Virginia

Additional comments from Peter Ochs:
"Robert Jenson is as lovingly patient with Ezekiel word's and with the Spirit's unpredictable movements through them as he is impatient with any modern reader's temptation to 'know' the text before moving with it. Here is a reading through which the great 'irresolvable' dichotomies of modern thinking are shown to lack imagination. Jenson's reading shows how a Christologically figural reading can at the same time be non-supersessionist; how a doctrinally Christian reading can attend at the same time to the text as an historical document; how a reading that explicitly addresses our modern prejudices can at the same time attend to the scriptural text as a document of Christian witness; and how a Christian theological reader can honor scriptural law as well as divine grace. This is a commentary that is informed equally by the verses themselves and by the spirit of lifelong theological study. Here Ezekiel meets up with Martin Luther and Karl Barth and this all makes wonderful sense as a careful exegesis of the prophetic texts. Readers are treated to a mutually enriching dialogue between the vast textual and theological wisdoms of one of contemporary Christianity's greatest thinkers."--Peter Ochs, University of Virginia

"One of the most powerful trajectories in Jenson's commentary is his use of law and gospel as an interpretive framework. . . . Jenson's comments represent, to my mind, the best of what the Brazos series can offer, namely, critical reflection on how textual claims can positively interact with dogmatic formulations. . . . Although writing as a Protestant theologian to a Christian audience, Jenson is remarkably sensitive to Jewish interpreters. . . . The result of Jenson's study is a creative and rich Christian reading of Ezekiel that exemplifies the theological aims of the Brazos commentary series. Jenson's work should find a home on the desk of any pastor, minister, or lay person who is interested in serious theological engagement with Ezekiel. . . . Jenson's work brings clarity to this often confusing and under-preached prophetic book."--Michael Jay Chan, Word & World

"Engaging and punchy. [Jenson's] introduction arguing for the propriety of a theological reading of the OT is worthwhile in itself."--Ray Van Neste, Preaching

"Jenson's book is a good companion in the venture of reading Ezekiel. . . . The commentary is broken down into the logical units of the text itself, never too unwieldy in length and sometimes quite short if the logic of the passage dictates it. . . . Jenson allows for multiple hands at work in the final text, but since it is after all the canonical text . . . he doesn't trouble himself overmuch about separating out the different strains. They all have something to say; he does his best to illuminate what all these pieces have to say; and he graciously admits defeat when stumped. Not that this happens often. . . . Altogether Jenson's commentary will not infrequently cause discomfort; but I suspect that a comfortable reading of Ezekiel would almost certainly be a faithless one."--Sarah Wilson, Lutheran Forum

"The strength of Jenson's commentary is its ability to show every line of Scripture as vibrant with theological meaning, and it is hoped that this will quicken the imaginations of future interpreters. Readers will often find Jenson's theological reflections provocative and will be rewarded for ruminating on them. . . . This commentary will especially be of use to students and pastors working with a specific passage."--Nathan Chambers, Calvin Theological Journal