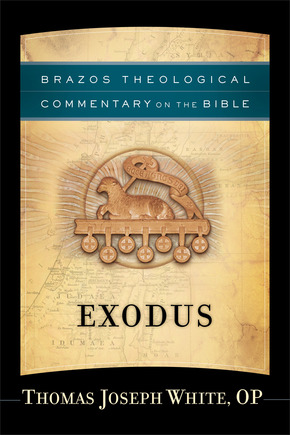 Exodus recounts the origins of ancient Israel, but it is also a book of religious symbols. How should it be interpreted, especially in light of modern historical-critical study? In this addition to an acclaimed series, a respected scholar offers a theological reading of Exodus that highlights Aquinas's interpretations of the text. As with other volumes in the series, this commentary is ideal for those called to ministry, serving as a rich resource for preachers, teachers, students, and study groups.

"Thomas Aquinas left us no commentary on Exodus. But Thomas Joseph White succeeds in giving us a sense of what one from his hand might look like today."

"White's reading of Exodus tackles head-on the peculiarly modern conceit that all that stands between the reader of scripture and wise reading is a lack of knowledge--a deficiency of information. Surely, say White and the Catholic tradition to which he hereby contributes, as readers we typically lack the moral formation to see clearly the text and its truths. As such, we take a journey in tandem with the Israelites: from darkness to light and from slavery in Egypt to life-giving service (and understanding) under God's law. Drawing deeply on the fourfold sense of scripture in dialogue with Aquinas and many other serious theological voices, this commentary will strengthen and challenge all readers in pursuit of the God to whom the book of Exodus bears witness."

"In his introduction to this extraordinary commentary and reflection on Exodus, Fr. Thomas Joseph White, OP, writes that 'the classical Catholic approach to the moral law on Exodus is in many ways convergent with Judaism.' Thus I can now better understand why Maimonides (who so greatly influenced Thomas Aquinas, Fr. White's auctoritas) taught that Jews like me may learn Torah with Christians like Fr. White, who accept the Torah as divine revelation. In addition to that theological commonality (with differences to be sure), I very much identify with Fr. White's philosophically informed way of reading the Torah. Indeed, 'those who fear the Lord speak to one another . . . who fear the Lord and think of his name' (Malachi 3:16)."

"[The Brazos Theological Commentary on the Bible] series seeks to restore the doctrinal interpretation of scripture by offering a range of interdenominational commentaries on individual books of the Bible. . . . The latest volume in the series is Thomas Joseph White's commentary on the book of Exodus. The work done here is excellent. White has been bold enough not only to grapple with the rich symbolism and moral theology of Exodus, but to do so with the constant support of patristic, medieval, and modern systematic theology, leaning especially on the work of St. Thomas Aquinas, whose analysis of the dispensations of divine law is especially helpful. Best of all is the Thomistic love of careful distinction and dialectical reasoning White brings to the text. . . . While White's commentary is short compared to the greatest of the medieval works on which it is modeled, its appearance makes one hope that we are entering a new era of scripture scholarship."

"White often addresses difficult biblical-theological questions via the narrative of Exodus, and this is a welcome addition to a commentary on this book. . . . The truly unique contribution of this new commentary is the interaction with Aquinas and Augustine on the text of Exodus. . . . White's theological insights are helpful and meaningful for Christians on both the moral and spiritual level, although perhaps more helpful for Catholic Christians. Likewise, White's defense of the omnipotence and benevolence of God, the Christological/typological interpretation of the exodus event, and his attention to the threefold use of the law in Exodus 20, provide numerous insights for those devoted to the task of interpreting Exodus."

"While [White] draws significantly on Aquinas's Summa theologica, the author also makes use of a variety of doctrinal and patristic works, and occasionally those of more contemporary scholars, including some biblicists. The point of this volume, and of the whole series, is not to read Christian tradition back into the biblical text but to appreciate and appropriate the theology of Exodus in conversation with the Christian tradition."