365 Reflections to Strengthen Your Faith 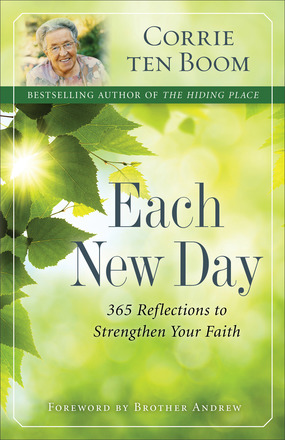 Hope and strength for every day

Corrie ten Boom was a remarkable woman of great faith. Against all odds, she was able to trust and serve God even in a Nazi concentration camp--and throughout the days and years that followed. But faith like that doesn't just happen. It's grown, day by day, through regular meditation on God's Word.

Full of insights from Corrie's fascinating life, each devotion in this collection vividly illustrates scriptural principles and attests to God's unfailing faithfulness. The result is a yearlong candid reminder of

· the Christian's victory over sin, Satan, and death
· God's wonderful promises and care
· how the past, present, and future are all in God's hands
· how each new day brings a chance to serve and love Him more

Few people can know more clearly than Corrie ten Boom did what it is to depend upon God day by day. Her brief but profound reflections will help you too find hope, confidence, and wisdom for whatever comes your way.

Corrie ten Boom (1892-1983) endured ten months in Ravensbruck concentration camp for hiding Jews in her family's home in Holland. After her release at age fifty-two, Corrie spoke around the world and wrote more than ten books, including the bestselling The Hiding Place and In My Father's House.