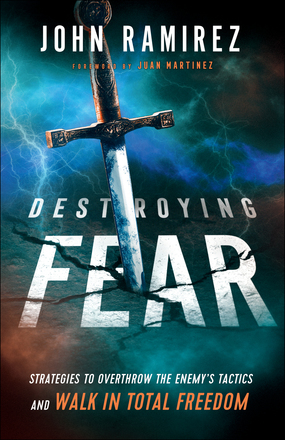 The enemy of our soul, the devil, a spiritual pharaoh, the master of fear--the Bible says he comes to kill, steal and destroy. He is an identity thief operating in his number one weapon: fear. He tries to steal our purpose, our destiny and God's best in our lives. It is time to fight back and destroy fear once and for all.

John Ramirez is a former satanic general from the kingdom of darkness who lived in the mind of the enemy for 25 years and who knows the patterns and cycles of the evil one. It is time to give the devil an eviction notice and kick the spirit of fear out of your life.

Through this powerful book, you will access the spiritual warfare arsenal to face fear head on. Not only will you uproot and dismantle it, but you will destroy it in the name of Jesus Christ. It is time to be armed and dangerous--a spiritual sniper against the number one weapon that the enemy uses: fear.

"Not only can you be set free from fear, but you can even put Satan under your feet! Get inspired. Get equipped. Get going!"--James W. Goll, founder, God Encounters Ministries and GOLL Ideation Music

John Ramirez is an internationally known evangelist, author and highly sought-out speaker who teaches believers around the globe how to defeat the enemy. He has shared his powerful testimony--of being miraculously saved as a high-ranking satanic priest--on It's Supernatural!, The 700 Club, TBN, Daystar and more. Learn more at www.johnramirez.org.

"You can get set free from fear! I know because I once lived in the grips of the fear of man and fear of rejection. Once you know the truth, there are results. Too many believers walk around chained to the past, to patterns of sin and to demonic bondage. But I agree with John Ramirez that not only can you be set free from fear but you can even put Satan under your feet! Get inspired. Get equipped. Get going! How? By devouring the testimony and the teachings based on the unfailing Word of God in this fireball evangelist's life and book Destroying Fear."

"There are many books by followers of Jesus on dealing with fear. What makes Destroying Fear by John Ramirez so powerful against any trace of fear in your life is that Ramirez was a follower of witchcraft, Satanism and Santeria for fifteen years, then came out of it to follow Christ, only to be pursued by various kinds of demons determined to punish him for breaking demonic fear. But Ramirez overcame the enemy and all his entrapments by deploying the spiritual weaponry and strategy described for everyone in detail in the book. Read it thoroughly, especially if you are in a Christian leadership position."