The Cross, Apocalyptic, and Political Resistance 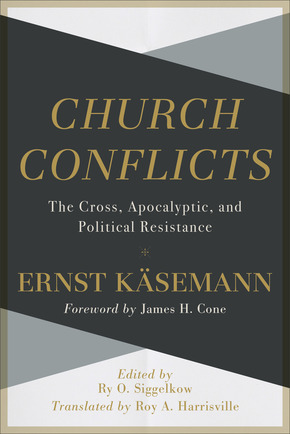 This important work by one of the most significant New Testament scholars of the modern period, now available in English for the first time, explores the significance of Christian apocalyptic for the church in times of conflict and crisis. Engaging with global social and political realities that are still very much with us, Ernst Käsemann offers a theological indictment of global white supremacy, capitalism, and militarism and passionately articulates an apocalyptic theology of liberation. The book includes a foreword by James H. Cone and an introduction by Ry O. Siggelkow.

"This fine collection of Käsemann's essays shows him at his provocative best, demonstrating with exegetical and theological vigor that there is no field of debate--including ecclesiology, ecumenism, politics, and the Christian life--in which any authority, tradition, bureaucracy, or dogmatics 'may limit the freedom of those who still seek to radically follow the Nazarene' in a world beset by oppression and obfuscation. Siggelkow and Harrisville are to be thanked for exposing an English-language readership afresh to the voice of this fierce disciple of Christ."

Philip G. Ziegler, professor of Christian dogmatics, University of Aberdeen; author of Militant Grace: The Apocalyptic Turn and the Future of Christian Theology

"Whether addressing World Council of Churches consultations, scholarly congresses, or church conferences, Ernst Käsemann maintained his penetrating focus on the central and always destabilizing lordship of Christ. This collection, previously unavailable in English, reflects its own time period while instructing ours. An important addition to our libraries."

"I learned a lot from Ernst Käsemann, and I am very grateful to him."

"Among Rudolf Bultmann's most brilliant students, Ernst Käsemann took demythologizing more seriously than many. How? By moving beyond devils flying about with horns and tails to the deified political and market forces of our day. It is these latter powers demanding our worship and allegiance that routinely grind down the poor, despoil the planet, and oppress millions by their lies. Confessing with the prophet Isaiah, 'O Lord our God, other lords beside you have ruled over us,' Käsemann calls the church to acknowledge the true God of Jesus of Nazareth 'to whom the earth and its creatures really belong.' To do so brings the church into conflict with the world as it is. And to do so also brings conflict within the church. Why? Because only in this way can Christians of all stripes test the spirits of their common life. Only in this way can those forces masquerading their evil by false pretenses and promises be ferreted out from those life-giving powers showing forth the persisting pattern of God's love and justice embodied by 'the crucified Nazarene.' Translated into English by Roy Harrisville, prefaced by the late James Cone, and ably introduced by Ry Siggelkow, this probing and convicting collection of Bible studies, essays, sermons, and lectures, all touching on church conflicts, could not be more timely for the church--and for the world."

"Among all the German theologians, or Europeans for that matter, whom I came to know when I began writing, Käsemann was the only one who understood me. He was a man of my own mind and heart and wrote concretely about what I was trying to express in my own situation."

James H. Cone† (from the foreword)