The Alternative Gospel of the American Church 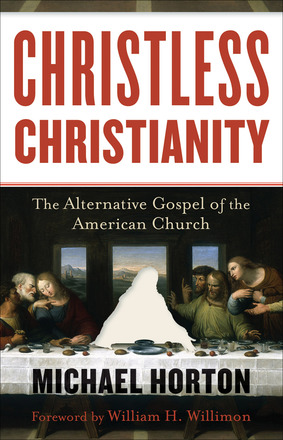 Is it possible that we have left Christ out of Christianity? Is the faith and practice of American Christians today more American than Christian? These are the provocative questions Michael Horton addresses in this thoughtful, insightful book. He argues that while we invoke the name of Christ, too often Christ and the Christ-centered gospel are pushed aside. The result is a message and a faith that are, in Horton's words, "trivial, sentimental, affirming, and irrelevant." This alternative "gospel" is a message of moralism, personal comfort, self-help, self-improvement, and individualistic religion. It trivializes God, making him a means to our selfish ends. Horton skillfully diagnoses the problem and points to the solution: a return to the unadulterated gospel of salvation.

"Horton confronts modern evangelicalism in terms reminiscent of J. Gresham Machen's challenge to liberalism in the 1920s. Both authors spotlight flaws that do more than distort Christian faith; they reject it. Horton's brush is broad--expect loud lamentation from the evangelical camp--but the picture he paints is largely accurate. His argument is convincing: therapeutic moralism has, in fact, found a home among evangelicals."--Parker T. Williamson, editor emeritus and senior correspondent, The Presbyterian Layman

"Christless Christianity makes an important contribution in defense of the centrality of Christ to vibrant Christian life and witness. Horton has ably helped us see the train wreck that is so much of popular Christianity. While others are legitimately concerned with errors originating in the academy, errors that excite the intellectual but few average pew sitters are even aware of, Horton turns his sharp mind to exposing the mass production of a kinder, happier legalism that robs the average Christian of the liberating joy of knowing the Jesus whose work is finished and never improved. A more important and timely volume could not have been written."--Thabiti M. Anyabwile, senior pastor, First Baptist Church of Grand Cayman, Cayman Islands

"Christless Christianity establishes Michael Horton as the outstanding protagonist for classical Protestant orthodoxy. His wide-ranging and carefully researched examples show how our churches and megachurches have pandered to the culture with Gnostic, Pelagian, moralistic, and self-help heresies bereft of the saving action of Jesus Christ. He leaves us with a profound trust and a sure confidence in our biblical faith. What could be more important?"--Episcopal Bishop C. FitzSimons Allison