The Practice of Mission in the Twenty-first Century 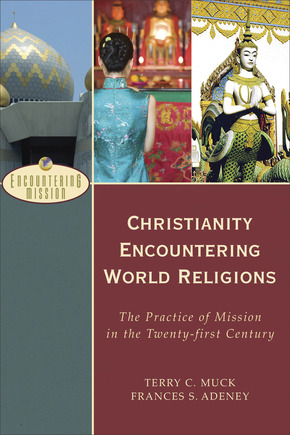 "A rich and stimulating work which proposes a new way of thinking about and practicing Christian mission among adherents of other religions. . . . This is a thoughtful and penetrating discussion which deserves a wide reading among mission theorists and practitioners."--Harold Netland, Evangelical Missions Quarterly

Given the unique religious climate of the twenty-first century and the challenges to Christian mission it poses, Christianity Encountering World Religions proposes a new, albeit very biblical, model for mission. Specifically, it is a model for interacting with people of other faiths. The authors term this model "giftive mission," as it is based on the metaphor of free gift. They suggest that seeing mission activity through the lens of giving the greatest gift possible--the gospel message--not only has the potential for greater missionary success but also enables us to imitate more closely God's gracious activity in the world.

The book begins by addressing preliminary matters: the current state of religion, the biblical material, and the presuppositions readers bring to the subject. Part 2 explores eleven practices that constitute giftive mission. Each practice is illustrated through the story of a figure from mission history who embodied that practice. Part 3 addresses method: how to apply the eleven practices in specific cultural and religious settings. The concluding section of the book ties all the prior discussion together and presents a compelling case and vision for giftive mission. Mission scholars, students, and practitioners will benefit greatly from this probing study.

"In an era when Christians are frustrated by the devotion of whole peoples to religions that are fiercely resistant to gospel missions, this book will come as a bold and liberating proposal for both mission theorists and practitioners. Professors Muck and Adeney draw from decades of experience and scholarship to construct a model based on imitatio Christi and missio Dei. Perhaps the most helpful feature of this book is its expert use of stories from twenty centuries of missions to illustrate, in fascinating detail, 'giftive mission.'"--Gerald R. McDermott, Jordan-Trexler Professor of Religion, Roanoke College

"Here is a gift to global Christianity: a new and carefully argued metaphor for Christian relations to other religions. Muck and Adeney argue that other metaphors are not obsolete, but the leading image today should be 'giftive mission.' Get used to the phrase for it will become part of missiological parlance in the coming decade."--Scott W. Sunquist, dean of the School of Intercultural Studies, Fuller Theological Seminary

"Finally we have in a single volume a sustained, creative, and approachable argument describing how Christians should think about their relations with people of other faiths. There is neither a more important issue in missiology today nor a better presentation of the material in a constructive piece. The authors lucidly lay out the various positions and approaches, but they also clearly spell out their own commitments. I now have a book to point to and say, 'Read this, and then we can talk about Christian life and responsibility in a religiously plural world.'"--Scott W. Sunquist, W. Don McClure Associate Professor of World Mission and Evangelism, Pittsburgh Theological Seminary

"What David Bosch's magnum opus, Transforming Mission, did for theology of mission, Muck and Adeney's Christianity Encountering World Religions is destined to do for Christian mission in a religiously plural world: literally take the discussion to another level for the next generation! The authors bring years of scholarly work on interreligious encounter and of teaching missiology in seminary contexts to bear on writing this biblically faithful, practically insightful, and theologically sophisticated textbook. Theologians and missiologists alike will be challenged theologically . . . , epistemologically . . . , and at the level of mission praxis. . . . This book will challenge both progressives and liberals on the left and traditional evangelicals on the right, even as it infuses new life in surprising ways to Christian mission in the religiously plural world of the twenty-first century. More importantly, Muck and Adeney present an evangelical mission converted by in depth encounters with religious others even as it bears more faithful witness to the gospel. This book cannot be recommended more highly!"--Amos Yong, Religious Studies Review

"Muck and Adeney have produced an outstanding work. It is biblical, historical, and practical. It demonstrates a keen awareness of contemporary mission in its multiple facets. This book is useful as a textbook and for its charts describing aspects of mission. There are pertinent questions for reflection and discussion."--Calvin E. Shenk, Missiology

"A rich and stimulating work which proposes a new way of thinking about and practicing Christian mission among adherents of other religions. . . . The book is relevant not simply for those interested in a relational model for engaging people of other faiths, but more broadly for anyone interested in crossing cultural boundaries with the gospel. This is a thoughtful and penetrating discussion which deserves a wide reading among mission theorists and practitioners."--Harold Netland, Evangelical Missions Quarterly

"A textbook . . . dealing with the theory and practice of missiology and offering a model of mission that falls nicely into the inclusivist column. . . . An interesting feature is the research that the authors have done on an ecumenical list of Christian history's greatest missionaries. . . . There are useful case studies, an index, and a bibliography. While not an objective study of missions or missiology today, it is a useful example of such for those studying Christian mission from an ecumenical point of view."--Eugene J. Fisher, Journal of Ecumenical Studies

"The book has many merits, not least its exposition of mission as 'gift,' a metaphor which resonates well in virtually all human cultures. . . . This book is especially recommended for pastors struggling with issues of pluralism in the West as well as for students and Christian leaders in Asia. Christianity Encountering World Religions provides a bold and creative approach for finding a way for mission in a religious world. The text is enlivened by sidebars which make for readability and good conversation."--Roger E. Hedlund, Dharma Deepika

"[Muck and Adeney's] two perspectives combine well to make this book a guide to the future of 'giftive mission.'. . . The strength of this book is its courage to go beyond the status quo of mission theology that has failed to complete the Lord's mission. It presents a carefully crafted theory and attempts to work it through the various steps of incarnation, to make it a real possibility for missionaries. Helpful sidebars are used throughout the book as spaces to clarify and review the various concepts. . . . This book breaks new ground in the area of encountering world religions. It is recommended to missionaries who have grown beyond easy answers and quick cures. It will also serve well as a supplemental text in theology of mission and world religion courses at the advanced level."--William T. Purinton, Trinity Journal

"One of the strengths of the book is its overall thesis. The metaphor of gift-giving is a helpful way to understand the missionary task. . . . The authors also provide a helpful study of the history of Christian missions. Their examination of key historical figures is beneficial for two reasons. First, they focus on several of the less known missionary heroes. . . . The presentation of the material is unique and refreshing. Second, by focusing on key innovators, the authors help the reader to understand how mission strategy is always being refined and reshaped to meet the needs of the day. A third strength of the book is the method the authors give for interacting with those of other religions. . . . The authors . . . make a clear case that understanding the missionary task as a gift-giving enterprise is a helpful metaphor for the twenty-first century context. Given the nature of today's globalized world, the question of how believers should interact with adherents of other religions is one that will certainly continue to be asked. . . . Muck and Adeney have provided Christians an insightful approach in answering this difficult question."--Will Brooks, Great Commission Research Journal

"The book is clearly designed as a textbook for a course in missions. . . . It is a valuable text that responds to many important issues in contemporary global missions."--Kent Van Til, Calvin Theological Journal

"[The authors] make a convincing argument and do so in a manner that is both theologically rigorous and eminently readable and understandable. . . . Throughout the book they use summarizing sidebars to help the reader grasp the material. These sidebars are not a 'dumbing down' of the material but helpful summaries that actually encourage further reading of the text. . . . This book will lend itself well for use in academic and mission training settings. . . . [It] present[s] a compelling case for mission in a manner that the message and method have the potential for consistency. It also requires us to learn to receive the gifts of others, both in their culture and their religion, without abandoning the gift we have in Jesus Christ."--Tim Stair, Mission Focus